Rashtriya Swayamsevak Sangh(RSS) has passed two resolution in Akhil Bharatiya Prathinidhi Sabha. The first resoluton is on the issue of corruption & the second resolution is on growing China threat. Adressing the media persons here in Puttr,national executive council member of RSS, Ram Madhav elaborated on the resolutions.

The first resolution titled, ‘Need for a decisive blow against corruption’, talks about unrooting the corruption from the country in two fronts. First front stresses on the need of creating value based & ethic abiding men. The resolution talks about the urgent need to reinstall the ‘Sanskar’ based ‘man making system’ into the society, which were gradully eroded from the society.And as a second priority, RSS urges the people of the country to back all the individual & institutions, who are & will fight the corruption. 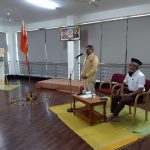