For sheer gall, there’s nothing to beat the draft Prevention of Communal and Targeted Violence (Access to Justice and Reparations) Bill, 2011. If allowed to become law in its current form, it will not only exacerbate communalism, but also destroy the foundations of our federal structure. Here are nine reasons why the Bill must be jettisoned lock, stock and barrel and a new drafting committee comprising all major political parties set up in its place to prepare an alternative. First, it is surprising why an unelected body like the National Advisory Council (NAC), which is home to Sonia Gandhi groupies, was allowed to draft a Bill that is so crucial to communal harmony. This is a Bill that requires a national consensus, and getting a bunch of Congress-leaning activists to masquerade as the voice of civil society is nonsense.

Second, the Bill is itself communal in nature. According to a key definition on the people who are presumably the focus of targeted violence, “group” means a religious or linguistic minority, in any state in the Union of India, or Scheduled Castes and Scheduled Tribes (SC/ST)….”. If you take away that fact that religious minorities and the SC/STs between them account for over 40% of the total population, the Bill cleverly posits that the other 60% (which may include upper castes Hindus, other backward castes and some miscellaneous groups) are the only people capable of targeted violence. Are we saying 40% can never target 60%, given that these numbers are distributed all over the country?

Take the case of Punjab and Kerala. In Punjab, the Sikhs constitute a slim majority of the population, but with an SC/ST share of close to a third (and, therefore, excluded from the definition of people who can target violence against some group), we have the situation where the majority (Hindus and SC/ST Sikhs) is supposedly being targeted by upper crust Sikhs (the majority minorities). This is hilarious.

The same in the case in Kerala, where the nominal Hindu population is around 55%. But when you take the SC/ST population out of the Hindu total, Hindus are by no stretch of imagination the majority, according to this Bill. So a minority (Hindus minus SC/STs) will be targeting other minorities.

Clearly, the Bill is not meant to tackle communalism, but to divide the people further into majorities and minorities, with only the latter being privileged enough to be considered a victim of targeted violence.

Third, the NAC draft is clearly driven by just one – admittedly important – case of communal violence: Gujarat in 2002. Any law that is drawn up on the basis of one outlier incident is likely to be draconian and foolish. The Bill is clearly targeted against the Sangh Parivar (no quarrel with that, as long they weren’t the only ones targeted) when the objective should be to prevent communal violence of any kind. But were the 1992 riots in Mumbai and the 1993 blasts the result of Hindu conspiracy? Were all the blasts that took place in India the last decade (barring the ones perpetrated by a bunch of extreme Hindu organisations in Malegaon) the result of upper caste violence against the minorities or the reverse? Let’s also not forget that the country’s worst communal riots did not happen during BJP watch (Gujarat in the late 1960s, and the 1984 anti-Sikh riots). The only case of gigantic ethnic cleansing in India happened in Kashmir, where the majority drove out the Pandits (albeit with help from across the border).

Fourth, the NAC draft Bill, if it is passed like anything in its present form, will destroy the federal character of the Indian Union. Law and order is a state subject, and so any law that seeks to take this right away and shift it to the Centre is unconstitutional. If passed, the law will stoke the fires of sub-regionalism since regional chauvinists will cite the reduction of state powers as reason to advocate secessionism. It will create Kashmirs out of every Indian state that is not ruled by the Congress.

Fifth, the Bill will seek to create a National Authority of Communal Harmony, Justice and Reparation (NachJar) with a seven-member panel that will effectively be unaccountable to anyone. It is supposed to be selected by a panel that includes the Prime Minister, the Home Minister, the Leader of the Opposition in the Lok Sabha, and nominees of all the national political parties (there are seven of them – Congress, BJP, CPI, CPM, BSP, RJD and NCP). It’s not clear if the Congress and BJP will have additional representation (from the party side) since they already have ex-officio seats as PM, Home Minister and leader of the Opposition in the Lok Sabha.

Since the selection of NachJar will be my majority vote, all the Congress needs is an understanding with three of the other members to pack the Authority with its own choices.

But once in office, it will be almost impossible to oust any member since they can be removed only by a presidential order, and that too on grounds of proven misbehaviour or functional incapacity and that, too, after a detailed inquiry is held. No member can be removed for partiality or failing to do his duty. Since four of the seven members have to be women and one a member of the SC/ST, it is anybody’s guess who will dare take them on.

In short, we will have a NachJar that is essentially unelected, unaccountable, and unmoveable.

Sixth, the Bill will facilitate central intervention against state governments that are from opposition parties, says columnist Swapan Dasgupta. Consider this situation. A few years ago, there were a few attacks on churches in Karnataka. The Yeddyurappa government was slow in responding to the threat initially, but soon he made amends. If an HR Bharadwaj were the arbiter in this case, it would have been goodbye Yeddyurappa. One is not holding a brief for the Karnataka Chief Minister, but surely the centre cannot act in an area where it is not empowered to. A clause in the Bill also says that the provisions will apply to all states barring Kashmir, where it needs the special permission of the state government. That’s because of Article 370. But shouldn’t elected governments be shown the same consideration in other states? The jholawalas of NAC appear to have decided that since they can’t dismiss inconvenient governments at will due to the lack of a Rajya Sabha majority, the Communal Violence Bill should come in handy. They have neatly avoided all centre-state issues by pretending that communal violence is beyond the law.

Seventh, the Bill seeks to bring in through the back door the doctrine of “command responsibility”, as this blogger in “offstumped.in” makes clear. This is the route through which the secular mafia tried to bring Narendra Modi to book, but if this idea is to be taken to its logical conclusion, we should accept that Manmohan Singh and Sonia Gandhi were responsible for the 2G and Commonwealth scams. One is the Prime Minister and the other his party boss and remote-control holder. But everyone is busy singing their praises in the face of the worst corruption scandal in Indian economic history. The doctrine of command responsibility does not sit well with the idea of decision-making errors. A wrong decision can be taken by any minister or bureaucrat several times in his career. There may even be political compulsions, and the Congress is fond of telling us. Unless we want to bring all decision-making to a halt, no one will take any risks. We will do everything by the book, and the country will go down the drain from decision paralysis – which is what is happening to the Manmohan Singh government in the wake of all the publicity given to the 2G scam.

Eighth, the Bill puts civil servants squarely in the firing line. While there is no doubt that civil servants who don’t do their duty (examples are Gujarat, the anti-Sikh riots of 1984, the 2G scam, and West Bengal’s Nandigram fiasco), there is only one measly clause saying no public servant shall be prosecuted for actions taken in good faith. But clause 13 gives the game away by listing a whole host of crimes that civil servants may be hauled up for under the head “Dereliction of duty.” They do not even have a copout saying they were following orders, for they have to judge if the orders were lawful or not – a difficult decision to make in the fog of a crisis situation.

Now, try and apply this situation in Kashmir, where stone-pelting mobs are damaging property and don’t heed the call of the police. What is the right decision that  a politician or civil servant will take? If he fires and saves the property, it may be called excessive use of force. Or even communal bias. In Gujarat, keeping quiet when the mobs were burning and killing was not an answer. But in Kashmir it is fine, is it?

The bottomline is this. This is not a Bill drafted in good faith. When you have cherry-picked the categories you want to nail through the Communal Violence Bill, is it any wonder you have come up with a definition that fits the Congress’ political rivals? 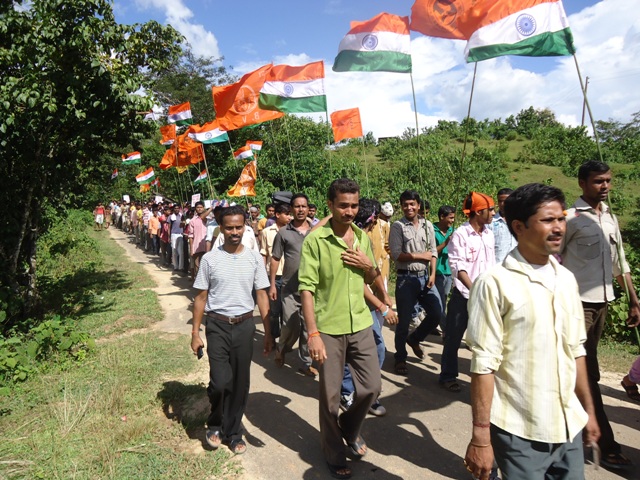