Bangalore: 100, 100, 99 and 99;  these are marks he secured in Mathematics, Physics, Chemistry and Electronics respectively in Second Pre-University examinations held by Govt. of Karnataka in 2011.  On May 25, when IIT-JEE results where out, he was the Topper of Karnataka State with rank 151. Now, the same boy  Secures First Rank in State level Common Entrance Exam, CET-2011. Scoring 60 in Maths, 58 in Physics, 56 in Chemistry, he became the state topper in Engineering rankings.

Aditya P Gaonkar, a student of Vijaya Composite PU College had a ever memorable May month of his lifetime as far as academic performance are concerned. Interestingly Aditya never went for coaching for his PU Courses. He just took IIT-JEE coaching from a private academy, was enough to achieve all his goals of Class 12.

Born in a middle class family, the achievement of Aditya is really inspiring for all studious students. Father Sri Prabhakar Gaonkar a State Bank of India Employee, Mother Smt Saroja are too happy about their son’s performance. Abhishek, brother of Class 8 at Vijaya High school also inspired by his brother’s achievement.

The entire family is a well-wisher of Rashtriya Swayamsevak Sangh. Aditya  has spent his school day evenings in RSS Shakhas at Chamarajpets Shankar Shakha and Thanaji Shankha. He has attended all recent Sangh annual programmes like Gurupooja, Rakshabandhan, Yugadi etc. Parents of Aditya were in contact with Sangh since their student days, then they were associated with ABVP. The entire family is thankful to Sangh veterans and memebers of Keshavakrupa the Sangh headquarters, who constantly supported and inspiring Aditya.

“I practice yoga each day for 45 minutes. Meditation is one of the key to success. I am keen on taking Electronics engineering in IIT Madras. I did not study too much, but i put my heart in to the little studying I did” says 17year old Aditya Gaonkar. 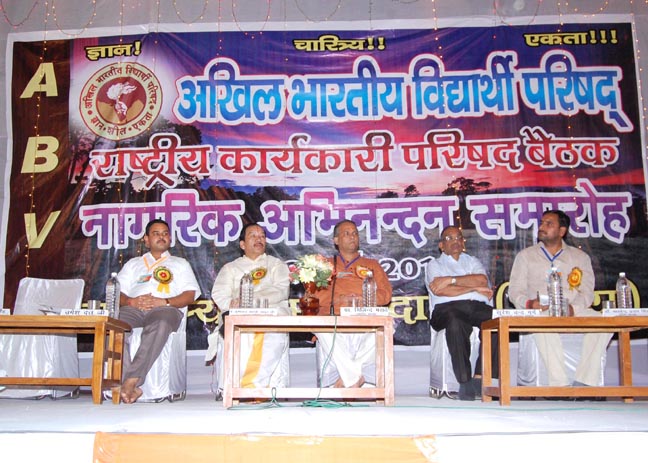