NEW DELHI: Seeking to mount pressure on the government, civil rights activist Anna Hazare on Wednesday observed a day-long fast at Rajghat and threatened another hunger strike from August 16 if Lokpal Bill is not passed by then, saying it was part of the “second freedom struggle”.

The agitation saw Hazare and his associates attacking the government for putting “hurdles” in the drafting of a strong Lokpal Bill that will have under its purview the Prime Minister, higher judiciary and MPs’ activities in Parliament.e Hazare slammed the government, alleging that it was trying to target the civil society members of the joint Lokpal panel, such as Shanti Bhushan, Prashant Bhushan, Santosh Hegde and Arvind Kejriwal through a “discreet” campaign.

Joined by a few thousand supporters, Hazare staged the protest against the police crackdown on Ramdev’s congregation here on Saturday night. The Hazare camp made it clear that the protest was “not for Ramdev as such” but the cause of black money, Lokpal and “assault on democratic rights”.

Terming the police action at Ramlila as a “blot on humanity” and attempt to “stifle democracy”, Hazare and his associates accused the government of trying to “steamroll” any dissent “only because they have been elected for five years”.

“We are yet to achieve real independence. The second struggle of independence has started,” Hazare said adding, he will launch an indefinite fast at Jantar Mantar here from August 16 if the Lokpal Bill is not passed by then.

Hazare’s fast in April had evoked nationwide support forcing the government to form a joint panel of civil society members and ministers to draft the bill.

The protest was initially planned to be held at Jantar Mantar but Delhi Police denied permission citing prohibitory orders in force as a result of which the venue was shifted.  During the 10am to 6pm protest held outside the gate of Rajghat under tight security, the activists including Kiran Bedi and Swami Agnivesh led tricolour-waving youths in singing patriotic songs and bhajans.
Comparing the police action at Ramlila Maidan to Jallianwala Bagh “without the firing part”, Hazare had a poser for the government — “What is the difference between your democracy and British Raj?”

Coming down heavily on the home minister, he said “(P) Chidambaram says these satyagrahas are danger to democracy. If he thinks that we are blackmailing him, then we will continue to blackmail. You are not our masters. MPs are the servants of the people.”

Hazare said the government was levelling allegations against civil society members to defame them.

“First they targeted Shanti and Prashant Bhushan through a CD and later took on Hegde. Now we hear that some officers have been put behind Arvind to find out about his assets. What is the need for doing so when he does not have anything? This is not good. If you want to ask something, ask directly. You are doing these discreet things,” he said.

At the same time, the Hazare camp distanced itself from Ramdev’s manner of agitation, particularly his threat to raise an “army” of 11,000 men and women, saying “we are very uncomfortable” with the suggestion and do not support it.

During the protest, a virtual open house on the issue of Lokpal during which people came out strongly in favour of bringing the Prime Minister, MPs and higher judiciary under the purview of the ombudsman. 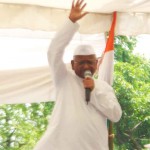 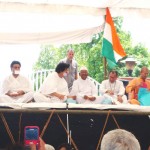 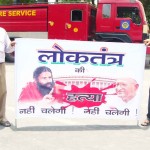 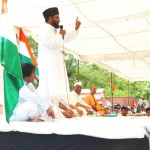 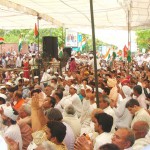