Newdelhi August 28, 2011: After securing Parliament’s nod on key elements of Jan Lokpal bill, Anna Hazare today ended his 12-day-old fast declaring that electoral reforms will be next on his agenda.

The 74-year-old Gandhian accepted a glass of tender coconut water mixed with honey from a Dalit and a Muslim girl — Simran and Ikrah — at 10:20 AM o the dais at the Ramlila Ground ending over 288 hours of fast that began on August 16.

After a brief address, Hazare was driven straight to Medanta Medicity run by eminent cardiologist Dr Naresh Trehan who was attending to him along with his team during his entire period of fast. Hazare will stay in the hospital for two-three days.

“I have only suspended my agitation. I will not rest until all the changes that I look to are achieved,” he said to a thunderous applause from thousands of his supporters waving tricolour and shouting slogans like ‘Anna Hazare Zindabad’.

Flanked by his team members, including Shanti Bhushan, Prashant Bhushan, Arvind Kejriwal, Kiran Bedi and Manish Sisodia, Hazare said what has been achieved in Parliament yesterday is a victory of the people of India, democracy and those assembled in Ramlila Ground.

“This movement has created a faith that the country can be rid of corruption and we can go ahead with implementing laws and the Constitution made by Dr B R Ambedkar,” he said.

Referring to Parliament’s decision to refer three of his demands — citizen’s charter, inclusion of lower bureaucracy and creation of Lokayuktas through Lokpal bill — for Standing Committee’s consideration, he said, the country can be proud of this moment.

Outlining his future agenda, Hazare chose reforms in election and education systems and working for the betterment of farmers and labourers.

“We have to reform electoral system. (we need) Right to Reject. You should be able to reject your candidate in the ballot paper. We have to do that.

“If majority say they do not like any of the candidates in the fray, the election should be cancelled. How much money they (candidates) will distribute? Once the candidate spends Rs 10 crore for one election and if the election is cancelled, then right sense will dawn upon them,” he said.

He said they will have to think about farmers’ problems as well as the woes of labourers and fight for them relentlessly.

Another area of concern for Hazare was the commercialisation of education and he said, “many people have commercialised education. They have opened shops. Children of poor people also should get education. This sector also needs reforms.”

Hazare said the current campaign has given him such inspiration that he will not keep quiet till change is brought. He also said he will tour the country to campaign for bringing in “much required” changes.

Against the backdrop of criticism from a section of Dalit leaders that his movement was anti-Constitution, Hazare said the movement was inspired by the Constitution written by B R Ambedkar, whom Dalits consider as their icon.

“Through this agitation we have also proved that people’s parliament is supreme than the Parliament in Delhi. Ambedkar has inspired us. He enacted the constitution. We have to fight for them,” Hazare said.

He also sought decentralisation of power, saying the real power should wrest with gram sabhas. “The Gram Sabhas should have the power to dismiss Gram Panchayats if they spend money without the former’s permission,” he said.

He dismissed the charge that Team Anna was against Parliament and that their methods were anti-Constitution.

“We respect Parliament but sometimes issues come up. Swaraj is not that you elect people for five years and that you forget till the next elections,” he said.

“Some people say we are against politicians. We never called all of them thieves. All politicians are not corrupt. There are politicians who even supported our agitation,” he said.

“For the first time since independence there was such a big debate about the law. Every village should get the copy of a draft before a law is enacted. After getting their views the Parliament should consider the Bill. Only then Gandhi’s freedom will be achieved,” he said.

Rejecting charges that they were against Constitution, he said they respect Constitution and its architect B R Ambedkar. “We salute B R Ambedkar,” he said.
In an apparent attack on RJD chief Lalu Prasad who criticised him in his speech in Parliament yesterday, he said, Ambedkar would not have imagined that Ambedkar would not have imagined that a day would come that “a man can eat fodder” or that people will stash money away in Swiss banks. 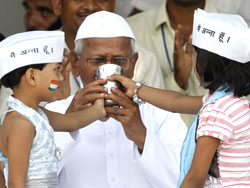