When they are cornered the politicians, like wild cats, tend to go berserk. Same thing seems to be happening to the likes of Home Minister Chidambaram. How else can we explain his utterly ridiculous statement today that the BJP is targeting him because he pushed forward hard with the investigations against the Hindu groups in terror cases?
Now the context is entirely different. A. Raja, the now infamous former Telecom Minister, has said in the Patiala House Courts on 25 July that the Prime Minister and the Union Home Minister Chidambaram were very much in the know of the 2G spectrum allotments. Chidambaram was the Finance Minister when the allotments took place. Raja’s contention was that whatever decisions were taken by him in the 2G-spectrum allocation matter were with the full knowledge and approval of the Prime Minister and Chidambaram. In other words he has questioned the logic of keeping him in Tihar jail while his colleagues and collaborators still occupy North Block and South Block.
The BJP has demanded the resignation of both the Prime Minister and Chidambaram. Naturally the Congress could have responded in a mature and politically befitting manner to the BJP.
In stead Chidambaram chose to ‘Diggyise’ the issue by raising the bogey of Hindu terror. His answer (if it can be called one) to BJP’s criticism was that the Party was targeting him because he went after the Hindu groups in the terror investigation. Now, the BJP has not made any allegations against Chidambaram by itself. The allegations came from a very important former colleague of Chidambaram and former Union Minister A. Raja. Does Chidambaram mean that A. Raja too was influenced by Hindu forces to blame him?
Chidambaram’s foot-in-the-mouth reaction establishes the guilt in him. The guilt is two-fold; one, of course, is what A. Raja has revealed – complete connivance in the spectrum scandal; second, by his own admission he was directly responsible for targeting and trying to wrongfully implicate Hindu groups in the terror investigation.
Now the cat is out of the bag. It was Chidambaram’s scheming; to falsely implicate Hindu groups in terror cases so that the attention of the nation can be diverted from the horrendous looting and corruption indulged in by him and his colleagues.
It is the other way round!!
Ulta Chor Kotwal ko Dante…. !!!!
Source: http://ram-madhav.blogspot.com/

Mon Jul 25 , 2011
Rashtriya Swayamsevak Sangh has clarified that the issue of leadership change in Karnataka Government is totally an internal matter of Bharatiya Janata Party. Speaking from Mumbai, national spokesperson for the RSS, Ram Madhav, said, “Change of leadership of the Karnataka government is purely a party affair. The RSS will not […] 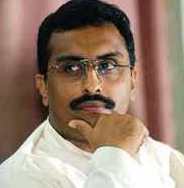