The road to hell is almost always paved with noble intentions. In the Indian democracy, this has been proven true a countless number of times. I am afraid we shall be headed yet again towards hellish times if a new policy that is being currently debated manages to become law, thanks to the super secular denizens of India whose intensity and range of noble intentions usually matches the mayhem that the same noble intentions often trigger.

I am talking about the well intentioned economists, sociologists, activists and assorted jholawala types who are convinced that it is their divine right to advice the UPA regime on all sorts of policy issues. Right at the top of this pyramid of do-gooders is the National Advisory Council (NAC) which is headed by Sonia Gandhi. Virtually all the members of NAC have impeccable records and reputations when it comes to their commitment towards the aam aadmi of India. Let me also be very clear in stating that a lot of credit for path breaking policy changes like the Right to Information Act, the NREGA and the Right to Education Act should go to the NAC. It is also wonderful to see members of the NAC valiantly battle it out against a callous, insensitive and cruel government when it comes to implementing the Right to Food Act.
In each of these above mentioned cases, the men and women with noble intentions have sought to protect and defend the rights of victims – usually the poor and the downtrodden of India who get only lip service from the government. And now, this group of people has set out to protect and defend the rights of another set of victims – I am talking about the victims of communal riots and violence. Nobody will dispute the fact that communal riots have been a blot on the Indian democracy. Similarly, nobody will dispute the fact that those have usually been the minorities who have borne the brunt of communal violence, even though provocation often comes from both sides of the divide.
The 2002 riots of Gujarat and the 2008 riots of Orissa are often cited as classic examples of how communal violence makes hapless victims out of minorities. In Gujarat, it was Muslims; and in Orissa, it was Christians. So to continue with their noble mission to protect and defend victims, members of the NAC have given the green signal to the Communal Violence Bill – officially labelled as the Prevention of  Communal and Targeted Violence Bill – that seeks to protect minorities from murder, mayhem and worse during communal riots.
When I read newspaper reports about this proposed law and the objections raised by politicians like Arun Jaitley, my first reaction was that the BJP was probably trying to play the Hindutva card. But I was speechless with shock when I actually managed to go through some provisions and clauses of the Bill.
Most newspapers, magazines and TV channels have been politically correct and have sheepishly and squeamishly reported about the problems with the Draft Bill. But I have never believed in being politically correct. And so, let me say in plain words what the implications of the proposed law are.
If this Draft Bill becomes law, it will become Constitutionally accepted that only Hindus cause riots; and that Muslims, Christians and other minorities can never be held responsible for riots because the definition of the term ‘group’, which is the backbone of this Draft Bill, is made totally in such a manner that the majority, that is the Hindus, will be at the receiving end of the stick.
Thus, if this Draft Bill becomes law, the Indian Constitution will accept that only Hindus incite and provoke religious hatred and denigrate other religions; and that Muslims and Christians can never do that. If this Bill becomes law, all the accused in the Gujarat riots will be culpable and be sentenced, while all those responsible for the death of train passengers at Godhra would be presumed to have harboured only goodwill for Hindus.

If this Bill becomes law, only Hindus will be tried, convicted and sentenced for communal violence and incitement of communal hatred because the Constitution will refuse to accept that Muslims and Christians are capable of violence and hatred. If this Bill becomes law, any anonymous complainant can file a police case against a Hindu for inciting communal hatred – and the police will have to register it as a non-bailable offence. The accused – who would be arrested – would not even have the right to know who the complainant is. And the accused Hindu will virtually be presumed to be guilty unless he or she can prove his her innocence. A Hindu activist who complains against fanatic Christian missionaries (Believe me, there are many of them out there) converting tribals through inducements and bribes will be sent behind bars; the Christian missionary who openly calls Hindus ‘heathens’ or ‘Kafirs’ and tramples upon idols of Hindu Gods and Goddesses will be forever found innocent by the Indian Constitution.
That was as far as Hindus are concerned. But it is not just about them. Every other clause in the Bill seems flawed. The definition of ‘Hate Propaganda’ is designed to give the government draconian powers and curb freedom of speech. The bill seems to be made on the basis of a dictatorial approach which assumes the accused guilty until proven innocent, and this is totally unconstitutional. Then, of course, it talks about the formation of a ‘National Authority’, a new power centre for harassment.
So, now you see where noble intentions can lead up to. I have no doubt whatsoever that activists, do-gooders and others of their ilk, right up to the members of the NAC, genuinely want to protect minorities from communal riots and violence. I have also no doubt that a majority of them – I am deliberately not saying all of them – harbour a peculiar and inexplicable hatred towards all aspects of Hinduism.
But ask yourself honestly: Is this Bill going to promote communal harmony in the country? I would have simply laughed out loudly and derisively if the matter had not been not so serious and potentially devastating for India. And frankly, how does one define minorities? There are many districts and towns in India where Muslims or Christians outnumber Hindus. Who will then be blamed for communal violence and riots? If one were to suppose there are riots in two towns in Uttar Pradesh – one with a Muslim majority and one with a Hindu majority… What will the police do in both these cases? Arrest only Hindus because the Indian law will state  so?
Moving beyond the Bill and the disastrous impact it will have on India if it becomes law, I must also point out one thing that is peculiar to the Congress party and the Gandhi family in particular. The readers of The Sunday Indian will know that I am quite an admirer of the Gandhi family, due to my particular fondness for the promise that Rajiv Gandhi held. I have never had any doubts about their contribution to the India story. And yet, they have had this strange tendency to depend on and promote advisors and Kitchen Cabinets – a move that has often cost them dearly in political terms.
Indira Gandhi had a series of advisors who came from a non-political background. They were committed Indians. And yet, it is they who are responsible for the monstrous license-permit raj in India that is primarily responsible for the endless corruption. Rajiv Gandhi too had many bright advisors who had no interest in electoral politics. And look at what they did first with the Shah Bano case, then the Ayodhya case and finally the Bofors issue. I fear Sonia and Rahul Gandhi are in danger of committing the same mistake. It was Shah Bano and Ayodhya during the Rajiv era that eventually propelled the BJP to power in Delhi. It could be the Communal Violence Bill in the Sonia and Rahul era that could yet again hand over the keys of Delhi to the BJP.
I will sum up by saying that communal harmony cannot be brought about with such discriminatory bills. It can be brought about by providing access to education and equal opportunities for a dignified living. It’s time the government thinks about such methods instead of passing such draconian bills or for that matter increasing internal security budgets etc. to fight the menace of naxalism. Access to equitable policies and right to a dignified living will take care of most of the problems that the government seems so clueless about.

2 thoughts on “Communal Violence Bill can be a disaster for India: Arindam Chaudhry”

Sun Jun 12 , 2011
L K Advani writes.. I have always been cynical about palmists, astrologers, etc. In politics quite a few hesitate to embark on a new project without having a clearance from the soothsayer they trust. I have often recounted how on one occasion my own skepticism was rudely shaken. Way back […] 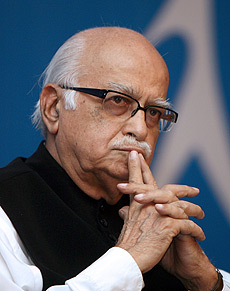