Bangalore, October 22: Answering to the questions from Journalists on few BJP politicians who were part of the government and were known Swayamsevaks, now behind bars for corruption charges,Dattatreya Hosabale told, “Indeed these incidents made us embarrassed. We advise our swayamsevaks when they need. Whenever BSY visited Sangh Headquarters, Keshavakupa, RSS Senior Functionaries advised him as he was a Swayamsevak.If he has not taken those advises seriously, it is wrong to blame RSS. If in a class of the 2 students one scores 90 marks and one scores 35 marks, we can’t blame the teacher for poor performance”

Dattaji added, “RSS will never support any corrupt leader. In March 2011, in a supreme meeting of RSS held at Puttur, Sangh has passed a resolution to fight against corruption. In that we have clearly pointed that we will support all forms of campaigns by anyone against corruption. Our Swayamsevaks were the part of Anna Hazare campaign also, across the nation. Today, corruption is a major social issue, needs a great reform in social life as far as corruption is concerned.”

One thought on “RSS will support all anti-corruption movements: Dattatreya Hosabale at Bangalore”

Sat Oct 22 , 2011
Dharamshala, Oct 22 (ANI): Rashtriya Swayamsevak Sangh (RSS) leader Indresh Kumar has said that Tibet was never a part of China and the Indian government should reconsider its decision and review its policies concerning Tibet. Kumar told the media here that after taking over Tibet, China had also grabbed the […] 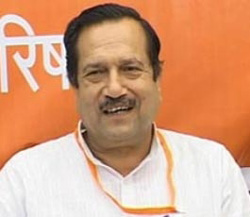