Frustrated after converted to Islam, Family returns to Hinduissm at Udupi

Udupi July 14-2011: For his love for a Muslim girl, he took no time to leave his mother religion. 5 years ago Prashanth Shetty married his lover Mushra. He got converted to Islam, appeared in a new name and new Muslim style. After 5 years he realised the situation, was frustrated to be a Muslim decided to return along with his wife and kids.

In a simple religious ceremony of reconversion (Paravartan) at Saralebettu Shivapadi Sri Umamaheshwari Temple near Manipal of Udupi district in Karnataka, family of Prashanth Shetty voluntarily returned to Hinduism. The family signed a letter stating the acceptance of Hinduism at the temple.

‘I am happy to be a Hindu; my husband never forced me to live with any restrictions. Where my husband goes i will follow him as a wife’ says Prathibha Shetty.

14 thoughts on “Frustrated after converted to Islam, Family returns to Hinduism at Udupi”

Sat Jul 16 , 2011
Swayamsewaks turn ‘Idkidu’ into ideal village Idkidu became a laboratory for rural development. The development of Idkidu village in Dakshin Karnataka district has been catalyzed by the golden touch of Swayamsewaks. The transformed face of this village indicates the gravity of the efforts which RSS karyakartas put in for its […] 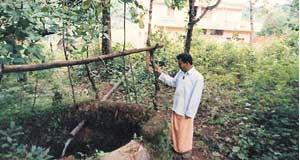