AHMEDABAD: Gujarat chief minister Narendra Modi began his three-day ‘sadbhavna’ fast on Saturday saying the day is not far when the country, and indeed the world, will discuss the state as a model one. “My fast is not against anyone… that was, is and will never be my agenda. Just like the world praises Gujarat’s model for development and governance, that day is not far when people will discuss our model for inclusive growth and communal harmony,” Modi said to a cheering crowd at Gujarat University’s plush convention hall here.

“I can say with pride that we want to move ahead and give something back to the nation. A state like Gujarat can pull another state which is not so developed. We have the strength and the capability,” he added.

Recounting the Gujarat earthquake of 2001, the communal violence of 2002 and the serial blasts of 2008, Modi said that each time the people have emerged stronger and have touched new heights of development.

“We have to move ahead taking everyone along and for that secularism and communal harmony is very important,” he said.

The BJP stalwart’s 72-hour fast under ‘Sadbhavna Mission’ coincides with his 62nd birthday.

On Friday, Modi had issued a statement that was interpreted as his first sign of regret over the 2002 post-Godhra communal violence.

“Constitution of India is supreme for us. As a chief minister of the state, pain of anybody in the state is my pain. (Delivering) Justice to everyone is the duty of the state,” Modi had said on Friday.

Modi, in an attempt to reach out to the minority community, had said the state has realised that communal frenzy and casteism never helped anybody grow in the country and expressed “gratitude” to those who pointed out his mistakes in the last 10 years.

Leaders of Shiv Sena, BJP’s ally for over two decades, and emissaries of Tamil Nadu chief minister J Jayalalitha of AIADMK are also expected to come here to in support of Modi.

In response to Modi’s move, Gujarat Congress leaders Shankarsinh Vaghela and Arjun Modhvadia also started their fast on a footpath in front of Sabarmati Ashram.

Sat Sep 17 , 2011
Mysore September 15:   Keeping a lonely cause of  Unity in Hindu society, a meaningful Walk for Social Harmony was organised in Dalit-Madiga colonies of Mysore on Thursday September 15.  The Samarasya Nadige (walk for harmony) was led by Sri Basavamurthy Madara Chennayya Swamiji of Chitradurga, in which hundreds of soci0-religious […] 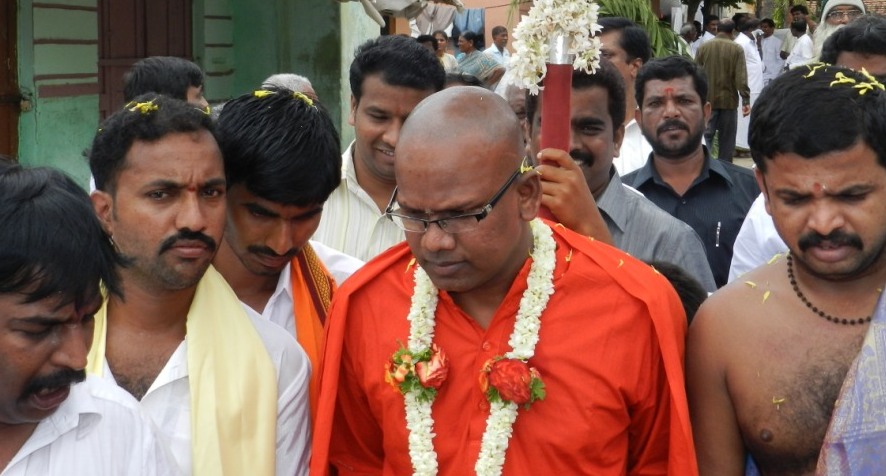