Bangalore Feb 20: “Lack of will power in the ruling parties both at J&K and Centre has kept the Kashmir Imbroglio alive over decades. Short sightedness about the whole issue made Kashmir to be in trouble for decades. Leaders should have enough courage, conviction to solve the crisis. There is a need of creating nation-wide  strong public opinion about the issue “says RSS central executive member Ram Madhav

“Pakistan is constantly trying to capture Kashmir. It has thrice waged the war against India to capture the Kashmir. But after facing humiliating defeats in each war, Pakistan has launched a ‘Proxy-war’ against the state of India, by training terrorists on its soil and infiltrating them to India” .

He was addressing an intellectual gathering in the city on “Kashmir: A Paradise in Flames”, at Vijayanagar RPC layout. The programme was organised  by Manthana, an intellectual forum.

Speaking to the selected audience, Ram Madhav said, “More than four lakh Kashmiri Hindus have become refugees in their own motherland. Now the Sikhs and Buddhists are facing the similar threats from the extremists. So, their population is on steep decline in J&K. Even though there are three regions of Jammu, Ladak and Kashmir, the bulk of financial aid is only for Kashmir. Now the terrorists are using a new strategy called ‘pelting Stones’ on the soldiers, from the hands of Women and children. Until now, more than 1500 soldiers are injured and many innocent civilians are killed. Few medias have reported about, protesters being hired and paid by extremists for stone pelting”.

He ponited at the lack of clarity about Kashmir even after 60yrs of Independence in our rulers as the basic & the biggest problem of J&K. ‘When Pakistan has a clear cut policy & extremists have their own clear policy, why can’t the Indian state  have clear policy on kashmir?’ Ram Madhav questioned.He also said that ‘ as mentioned in the accession Instrument of 26 october 1948, Kashmir is an Integral part of India & the argument of J&K CM that Kashmir is not fully integrated is baseless.

Madhav eloborated the events which had hurt the patriotic intensions of India . He was referring to the statements of interlocutors, who said Pakistan has a stake in the Kashmir. He said that interlocutors don’t have any right to play with the Kashmir problem & also pointed at how the separatist leader Mr.Gilani is enjoying the Govt facilities, but the family of Hukka Peri,a patriot who fought terrorist with army & was assasinated by terrorists in 2004, has been denied of even ex-MLA pension & other govt facilities. Madhav demanded the interlocutors to also take the opinion of the nationalist forces of Kashmir,  not just  the opinion of separatists.

Pointing at the recent developments, Ram Madhav said, ‘ the state Govt has allowed separatists to hoist Pakistan flag in Lal Chowk of Srinagar, but has arrested patriots who were trying to unfurl the tricolour at Lal Chowk on Republic Day, 2011. This is clear cut violation of Supreme courts order, which says tricolor should be hoisted on every house of India on Republic day”.He demanded the immediate arrest of stone pelters & Separatists. Answering a question on ‘Armed Force Special Act’, Shri Madhav said, ‘AFSPA is just not restricted to J&K, it is invoked in stated like Manipur & Nagar, and AFSPA is needed, whereever there is anti-national activites’. He also said that, as soon as the mitancy is wiped out of Kashmir, AFSPA can be withdrawn.

Throwing light on the present situation, he said that most of the people of Kashmir want to be a part of India & only ‘the rented protesters’ are throwing stones at soldiers.Ram Madhav urged the central govt to remember the  sacrifice of Shri Shyam Prasad Mukherjee &  words of Shri Jagmohanji, who said, ‘People of Kashmir are yours, but we have to give them the feeling that you are their leader’.

Presiding over the event former army lieutenant, Rtd Lt. colonel Sri GRV Prasan said that, “the issue in Kashmir is deeply troubling. There are both local and foreign militants creating disturbance each day. Even the army men including the common man there in the valley are disturbed by the each day violence.”

“Human right activists express pseudo-sympathy over the overall issue without showing a true spirit of consolations. Muslim domination is too increased, names like Islamabad are used by locals in place of Anantnag. The entire Kashmir Crisis is seems to be a well planned propaganda” said GRV Prasan.  Mr. Prasan is a Lt. colonel of Indian army & served the nation for 26 years. He had handled the responsibility of clearing the militancy from Kashmir & protecting Sikhs during anti-sikh riots in Delhi.

There was a visual presentation about the Kashmir Imbroglio.

The programme was attended by nearly 200 intellect enthusiastics, veteran RSS leaders and several others.

Sun Feb 20 , 2011
Bangalore Feb 20: RK Mishra’s speech: [audio:http://samvada.org/files/rk_misra.mp3 ] Ram Madhav’s speech:[audio:http://samvada.org/files/ram-madhav.mp3|titles=Ram Madhav’s speech] In a first of its Kind, nearly 500 young techie-Swayamsevaks from different Corporate-IT industries participated in “RSS IT Sangama-A confluence of all the Swayamsevaks of IT Milans, Karnataka” today at Bangalore. Dressed in RSS uniform-Ganavesh, with White […] 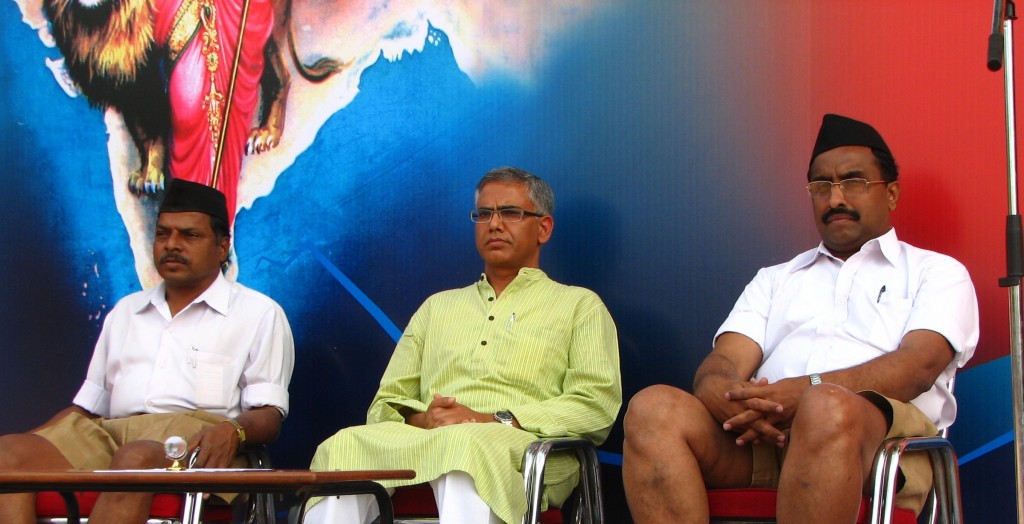