MUMBAI Dec 29:  Smt. Manan Chaturvedi, from Jaipur, Rajasthan is selected for Prof. Yeshwantrao Kelkar Yuva Puraskar 2011, among the various nominations received during this year from all over the country.

Selection committee of Yuva Puraskar 2011 has selected nomination of Smt. Manan Chaturvedi to appreciate her work done for the “ Rehabilitation of orphan and destitute children by uniqely owning their Motherhood”. Prof.Yeshwantrao Kelkar Yuva Puraskar has been instituted in 1991 to commemorate the inspiring life of the towering personality. It is a joint endeavour of ABVP and Vidyarthi Nidhi trust.

Prof. Yeshwantrao Kelkar Yuva Puraskar 2011 will be presented by Shri R.C. Lahoti (Former Chief Justic, Suprem Court) to Smt. Manan Chaturvedi on 4th January 2012 in the special function at 57th National Conference of ABVP which will be held at Delhi from 4th Jan.2012 to 6th Jan.2012.

Its objective is to encourage efforts of young social workers in various fields of public service, bring them in limelight and express gratitude towards them on behalf of the entire youth community. The Yuva Puraskar comprises of Rs.50,000/- in cash, a certificate & memento. The number of Yuva Social Workers who are the past recipients of this Yuva Puraskar, went to 20 since 1991to 2010.

A fashion garment mfg.co. in U.S. offered her a job in U.S. while she is studying a ‘ Fashion Designing’ at Delhi. When she return to Jaipur to meet and consult with parent for giving reply yes or no to the said garment company,at Sindhi Bus Stand she saw a girl of 11to 12 years old, without wearing a single piece of cloth to cover her body, searching food from the garbage . At that moment she asked herself why should I go to design cloths for them when peoples from my
own country didn’t have cloth to wear? and at once she decided to refuse the job and to start work for the poor shelterless children . The said work now known as “Surman Palna Sukhashram”.
She started distributing packets of biscuits and making medicines available to poor and destitute children from the slum.

The piteous condition of these children became troublesome to her and she started to provide shelter to orphan and destitute children . The first member is Gauri a girl of 1&1/4 year old and who is at the point of death, after the treatment of expert doctors and devotion of Mananji, get recovered . Now she is having good health and studying in school.
Manan hired one small flat from where project Palna has started, by giving shelter to one destitute woman along with her two Children & 17 destitute Children. Now there are more than 44 children including her own three children living together with Mananji under the project Palna .Though it looks like an orphanage for orphan and destitute children but when one entered in the flat he feels it like a whole family. One cannot distinguish Mananji’s own children from the other children.
Palna is a family of Mananji and now she has became a mother of 44 children, Therefore while running this project she remain sticked to the two things, first is not to take aid from government and second not to allow adoption of any children of Palna to someone else. The logic of Mananji behind this is Can any one take govt. help to run his own family or can any mother adopt his own child to some one? For day to day needs of the Palna she generated sources of Income by selling greeting cards, handicraft items and paintings etc. which were made in the family by themselves.
Beside that so many sympathizer help financially to this project. Mananji runs two more projects under the organization “ Surman Sansthan” ,they are ‘ Koshish’ for providing shelter and employment to destitute women and ‘ Fulwari’ for arranging ‘ one teacher pathshala’ and to celebrate the festivals in a adopted slum ‘Jotwara,Jaipur’.

Now Mananji wishes to create ‘Surman Gram’ a village where all these children, destitute women stay with self- respect.
Prof. Yeshwantrao Kelkar Yuva Puraskar 2011 will be presented by Shri R.C. Lahoti (Former Chief Justic, Suprem Court) to Smt. Manan Chaturvedi on 4th January 2012 in the special function at 57th National Conference of ABVP which will be held at Delhi from 4th Jan.2012 to 6th Jan.2012. 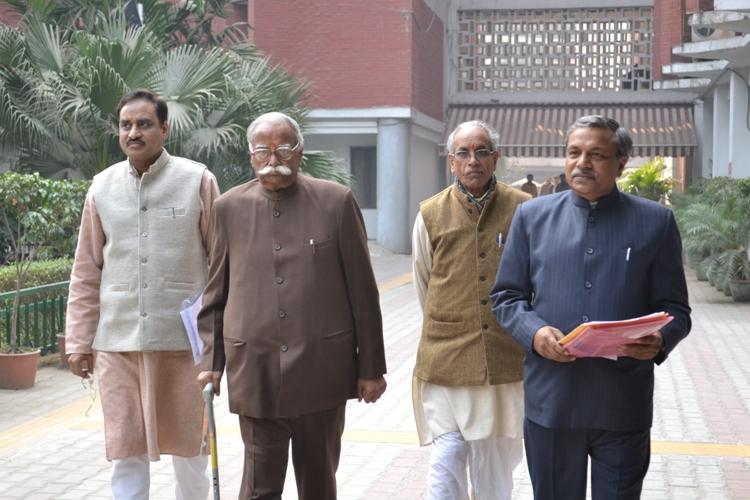