Anders Behring Breivik, the mass murderer, believed that there would be a 21st century version of the Knights Templar to save Europe from being run over by Muslims. Knights Templar was an armed Christian movement created in 12th century by Christian fundamentalists with blessings and support from the Catholic Church. It waged number of battles with Muslims of the times and had a bloody history. “Norwegian Mass Murder:  A Warning to the World”
What is interesting about the Norwegian who murdered scores in cold blood in the name of some ideology is his description by the European media as a ‘Christian Fundamentalist’. Which, of course, he is.
His so-called Manifesto refers repeatedly to a medieval movement called ‘Knights Templar’.  Anders Behring Breivik, the mass murderer, believed that there would be a 21st century version of the Knights Templar to save Europe from being run over by Muslims. Knights Templar was an armed Christian movement created in 12th century by Christian fundamentalists with blessings and support from the Catholic Church. It waged number of battles with Muslims of the times and had a bloody history.
While the media in Europe rightfully highlight this aspect of Breivik’s ideological background some in India found it appropriate to link him to the Hindutva movement. In his 1500-page so-called Manifesto Breivik does refer to India, and according to the media reports in more than 100 pages. He does mention about some books authored by Indians. He also makes several other observations – some history related and some about the contemporary political situation in India. But to insinuate that Breivik was inspired by the Hindutva propaganda is misleading and motivated.
Breivik’s act of killing innocents is reprehensible in strongest possible words. But the attempts to link it to Hindutva movement are also equally reprehensible. For, ideologically speaking, his views are more akin to hordes of conservative writers and thinkers of both sides of the Atlantic. In fact, he profusely quotes from the writings of respected conservative writers. His ideological position on issues like immigration, multiculturalism etc is no different from that of the likes of UK Prime Minister David Cameroon or German Chancellor Angela Merkel or French President Nicholas Sarkozy.
Each one of them have condemned his act of mass murder, so did many conservative thinkers. The duplicity of our ignoramuses is conspicuous in their attempt to blame the Hindutva movement for Breivik’s despicable act but their complete silence on his core Christian fundamentalist ideas. Also, this ‘guilt by association’ theory (there is no association, except some references from writings) is peddled out by these people selectively. By the same logic we have to blame Koran for the acts of Islamic terrorists; banish Marx, Mao, Lenin and Che etc up to Arundhati Roy, for, they are the ideological motivators of the Maoist terrorists. Breivik was also an admirer of the ‘Tea Party’ of Sarah Palin and of course his role models include Putin. Are they to blame for his acts?
It is important to note that this attitude of contempt and condescension of the Left-Liberal cabal is what is responsible for such heinous happenings. Issues that the conservatives raise, which today capture the imagination of a large section of the Europeans – thinkers and commoners alike, are dismissed and derided by these worthies rather than discussed and debated honourably. In fact the conservative writers, who are the biggest losers of Breivik’s horror, have been repeatedly warning the West about this impending disaster.
Breivik’s gory act should be condemned by everybody. But that is not enough. It is time we sit up and discuss the issues like multiculturalism, immigration, problem of Islam’s assimilation with Liberal Democracies etc without any malice. By refusing to do that and by indulging in witch-hunting we would only be inviting many more such tragedies.
Tail Piece: For this horrendous crime of killing around 80 people Breivik can get a sentence of just 21 years in jail. Norway, under the influence of the Liberalist campaign, banished death penalty. It is now interesting to see what these so-called champions of human rights would say when it comes to punishing Breivik.
http://ram-madhav.blogspot.com/

Wed Jul 27 , 2011
Noted Kannada Music Director Shri Mano Murthy visited the Narendra Nele (ನೆಲೆ नेले ) , a center for street children and interacted with the children. Every month illustrious personalities from different fields are called upon to interact with the children so that they are inspired to perform better in life. NELE is […] 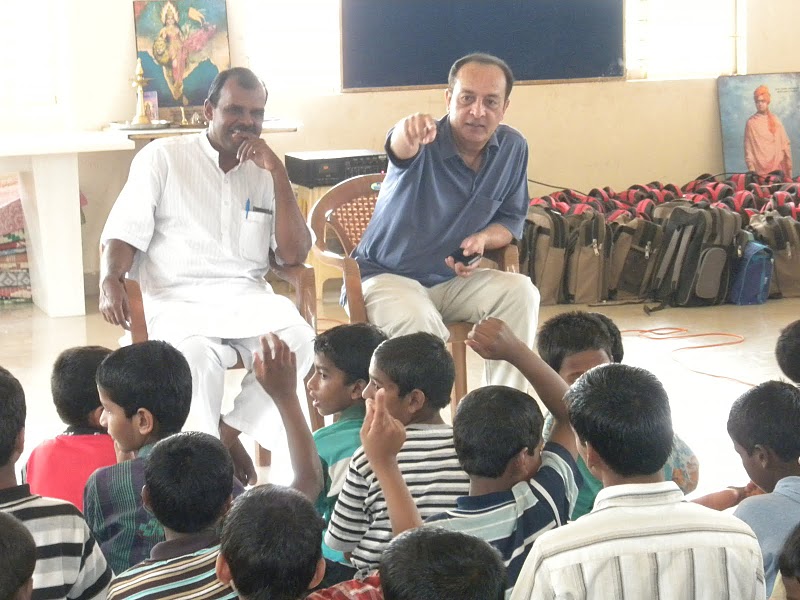