Anna Hazare’s decision to go on fast once again from 16 August is going to stir up nationwide reactions. It is clear from the response of the Government that there is enormous anxiety over how the proposed fast would turn out. Would it attract same attention nationally as it did before or it would fizzle out this time? Of course people in the Government would sincerely wish it fizzled out. But the national mood doesn’t seem to suggest that. Recent Times of India poll showed that about 80% urban youths strongly support Anna Hazare’s campaign. That is bad news for the Government. It is the urban crowds – including film stars, young professionals, sportsters, university-going boys and girls – that attract maximum media attention. Our media’s weakness for urbane things is too well-known. In fact Anna’s fast on the previous occasion was a major success partly due to the attention it attracted from the media.

That is not to suggest that he doesn’t command the support of rural populace. Corruption in our country has become so frustrating to every ordinary citizen – an urbanite and a rural man alike – that today anyone seen fighting against it will immediately receive the support of the whole country. No section in the country is spared of this national disgrace. Corruption has become so virulent that the fed up nation jumps at any bandwagon that is seen to be a bulwark against it. People don’t even want rationale – whether a particular form of protest is justified or not etc. They just don’t want to tolerate this utterly corrupt regime for a single day more.

In fact Anna’s agitation is a product of this public frustration and anger, so were the other agitations like that of Baba Ramdeo etc. The support they enjoy had been spontaneous and across the board. Some in the Government and the political establishment tried to give knee jerk reactions but ended up befooling themselves. They resorted to silly and superfluous campaigns like linking the popular anger against the corrupt that has manifested in Anna’s and Ramdeo’s movements to the RSS. They claimed, quoting intelligence sources, that the RSS was behind the movements and the leaders were only their ‘mukhota’ – frontmen. They even tried to justify their Fascist and unconstitutional midnight crack down on Ramdeo’s supporters with the fictitious claim that they had intelligence inputs about massive mobilization by the RSS to further Baba’s campaign.

As Pratap Bhanu Mehta stated in one of his articles, they were only enhancing the prestige of the RSS by making such allegations. The RSS has historically been playing an important role in all such public agitations. In seventies when Loknayak Jaya Prakash Narayan launched his historic campaign against the corrupt in the political establishment the RSS cadres too joined his campaign. The ABVP played a very important role in Loknayak’s campaign. Later when Indira Gandhi imposed draconian Emergency and curbed all the fundamental rights of the citizens of the country the RSS cadres actively opposed her undemocratic rule and again joined the Lok Sangharsh Samiti campaign in big numbers. Even the BBC acknowledged the crucial role played by the RSS during those trying times to save our democracy describing it as “the only non-Leftist force”.

But it must be noted that those movements were supported by many other sections of the society too, like the Socialists, the Gandhians etc. Even a section of the then Congress Party also finally joined Loknayak’s movement.

This time too the RSS cadre have been playing a similar role only. They are not ‘behind’ anybody nor is anybody their ‘mukhota’. They are WITH every movement that reflected and manifested the determination of the patriotic people to throw out this corrupt political establishment. They will continue to do so. Even in the forthcoming renewed agitation of Anna the RSS cadres, along with millions of other countrymen, would do thier utmost to make it a success.

Though there is a Government sponsored Lokpal Bill before the Parliament the agitators led by Anna say that it is just a hogwash. Government’s steadfast opposition to including the Prime Minister, who is the first among the equals in the Cabinet, in the ambit of the Bill raises suspicions in the minds of the people about the intentions of the Government. Simply put, biggest strength of Anna and others is the utter lack of credibilty of this Government on the question of combating corruption. People believe Anna more than they believe even the Prime Minister whose facade of personal honesty stood thoroughly exposed today.

Anna’s movement starting from Aug 16 is bound to attract huge support from the people. Government seems hell bent on crushing it. Any such misadventure will certainly recoil on the Government severely. Memories of the brutal crackdown on Ramdeo’s supporters are still very fresh in the minds of the people. Reaction to it’s highhandedness would be very serious this time. In stead the Government should try to accommodate the suggestions of Anna and others in it’s draft Bill and then refer it to the Parliament. Even Anna agrees that the Parliament is the supreme authority in passing or not passing the Bill. In either case the Members will be answerable to the voters in their respective areas. That is the only option left for the Government now.

Sun Aug 14 , 2011
Bangalore August 15:   It was a ocean of patriotism at Banappa Park, Near Corporation Circle Bangalore when Dr Pravin Bhai Togadia inspired the public who gathered in thousands. It was the occasion of midnight celebration of Independence day along with a commitment of making a dream come true of Akhand […] 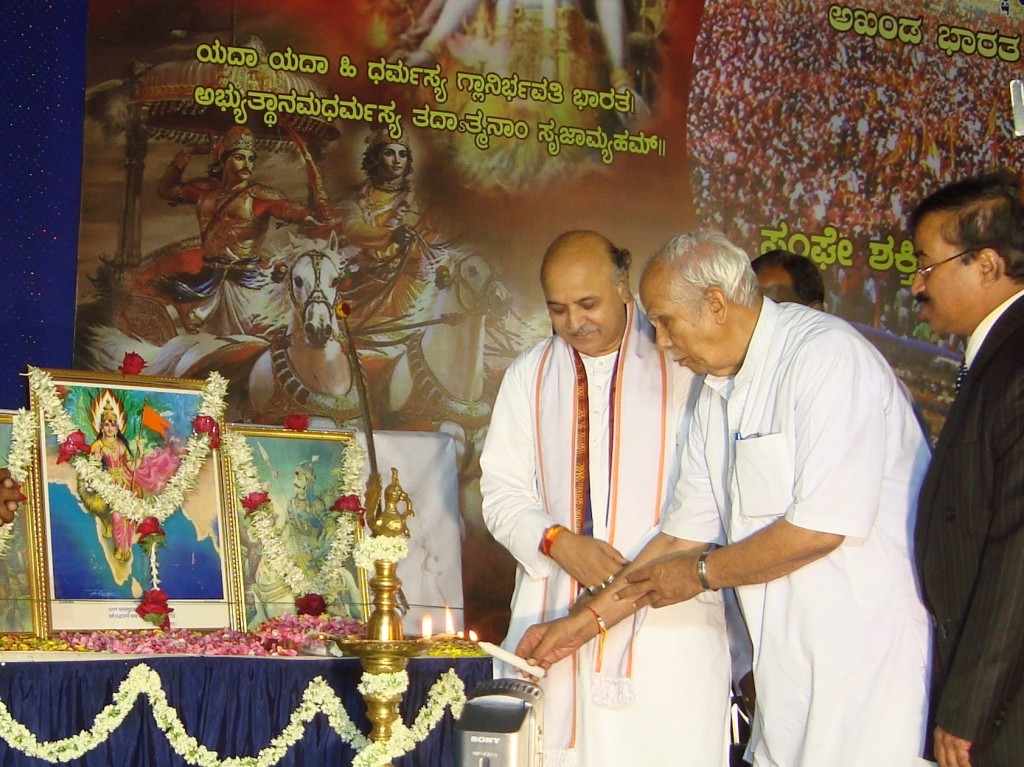