New Delhi: On saturday June 4th, 2011, Yoga Guru Baba Ramdev began his indefinite fast-unto-death at Ram Lila Grounds of Delhi to bring back the black money stashed in tax havens abroad. Around one lakh peole, in active support to the cause and in expression of solidarity to Baba Ramdev are also sitting at the Ram Lila Grounds. The satyagrah during which Baba and his supporters would only have water began at 7 am in the morning with people pouring in from every nook and corner of the country. By noon long and serpentine queues extending upto 3 km— from the entry point of Ram Lila Grounds— was visible outside the Ram Lila Grounds. Chanting “Vande Matram” thousands of eager people were seen lining up to get inside the canopy tents erected especially for this Satyagraha.

The support for the cause cut across regional and gender disparities and both women and men could be seen sitting inside cheering Baba with frequest chants of “Vande Mataram” and “Bharat Mata ki Jai”.

Ramdev Ji later said that there was a major ploy to render this movement unsuccessful and he would elaborate more on this at an appropriate time. He further added that no political perosnality would be allowed to deliver speeches from the dias and use this people’s movement to further any body’s agenda.

Those who shared the dasis along with Baba Ramdev included Sadhvi Ritambhra, Mahant of the Gangeshwar Dham, Pandit Devkinandan Thakur, Sadhna ji of the Jain Samaj, representatives from Churches and Maulvis from the Muslim community.

Sri Balkishan a close confidant of Baba Ramdev said the movement has spread to other parts of the world as well where people of Indian origin in 17 other countries are participating in this satyagraha from today.

On a Saturday, Dr Anil Pandey is yelling “Vande Mataram” and “Bharat Mata ki Jai”at the Ram Lila Grounds at Delhi. An ayurvedic doctor from Gujarat, Dr Pandey is not practicing any yoga asanans with Baba Ramdev nor experimenting on any of the ayurvedic therapies in the scorching heat of Delhi, rather he is here for a purpose—get the Black Money stashed in tax havens abroad. Baba Ramdev estimates there is around Rs 40 lakh crore black money in tax haven nations such as Switzerland, and this figure is growing fast.

“We support Baba Ramadev for this Satyagraha. We will continue with our satyagraha till the government accepts all our demands,” says Dr Pandey, squatting with his friends and relatives at the mattresses laid down for Satyagrahis at the Ram Lila Grounds.

Well, Dr Pandey is not alone. Around one lakh people cutting across regions, gender and religion actively support Baba Ramdev and are braving the Delhi heat and are on a fast with the Yoga Guru —temperature hovers around 40 degree celsius during Summers in Delhi.

As I find my way inside the especially erected canopy tents what strikes me most is the energy and patriotic fervour of these voluteer satyagrahis. The tents are packed with men and women, young and old with a huge number in their traditional attrires with colourful turbans.  Amidst cries of Vande Mataram, enthusiastic hands rise in support of the cause led by Baba Ramdev. Not a soul complains and there are no signs of weariness either.

Whether these chants fall on deaf ears of those in the power corridors just a few kilometers away from the Ram Lila Grounds  will be seen over the next few days but it does assure me of one thing. The aam aadmi —the common man, may not always react to misgivings of the government but that definitely does not mean it goes unnoticed. It lies in the sub-conscious minds and given the right opportunity  it vents out.

For instance, Balbir Kaur seemed to be in her mid-fifties and was here with her teenaged daughter. She says that she wants her daughter to live a dignified life where battles need not be fought to gain access to even the basic necessities of life. “Imagine how fast will the country progress if the government gets back the Rs 40 lakh crore Black Money,” questions a wistful Kaur.

The quantum of this Black Money may be disputed but everybody does agree that the size of “Black Money” is indeed very huge that has been accumulated by various fraudulnet means . The massive support to the cause only testifies that people neither forgive nor forget.

Sun Jun 5 , 2011
New Delhi: The Rashtriya Swayamsevak Sangh has condemned barbaric police action on people who were demonstrating peacefully to bring back the Black Money stashed in tax havens abroad. “Everything was absolutely fine till 11 pm so what happened all of a sudden? Abruptly, the police lathicharged and fired tear gas […] 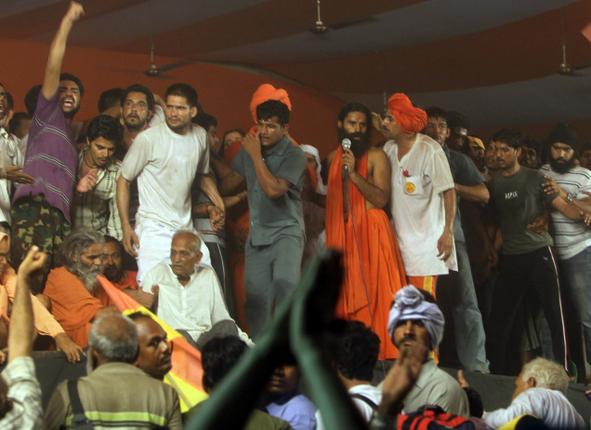