New Delhi: The midnight swoop on Baba Ramdev was an organised crackdown to meet political ends, Amicus Curiae Rajiv Dhawan told the the Supreme Court on Friday. Dhawan claimed that Delhi Police official were in was in constant touch with the Union Home Ministry during the crackdown on Ramdev and his supporters on the intervening night of June 4-5 at the Ramlila Maidan in New Delhi.

He also pointed out that when Ramdev was arrested, he did not make inciting speech and did not merit the lathicharge by the police.

The amicus curiae, which means advisor to court, quoted from police wireless logs of June 5, the night Ramdev was evicted from Ramlila Maidan.

One of the messages said Kamla Market police are beating people at Ramlila Maidan while another one says CRPF is not obeying orders and is moving out of Ramlila Maidan.

According to the police Ramdev was given a permission to hold a yoga camp for 5,000 people, but very soon the numbers swelled to more than 50,000.

The apex had issued notices to the Union Home Secretary, Delhi Chief Secretary and the Delhi Police for the midnight swoop.

Sat Dec 17 , 2011
Sullia, Dec 17 : “How long do you expect Hindus to sit quiet and suffer in silence when injustices are being inflicted on Hindu society, Hindu leaders, and Hindu girls? How can they continue to keep quiet and exercise restraint? It is impossible for us to be mute spectators for long. […] 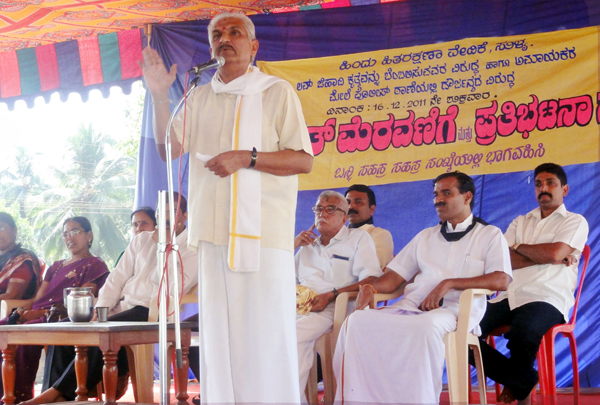