The Akhil Bharatiya Karyakari Mandal is gravely concerned about the indifferent attitude of the Government towards growing tensions along the borders; rising incidents of encouragement to separatism and terrorism from across the borders; emerging challenges across aerial and oceanic borders; and increasing threats in the international seas and outer space. The ABKM wishes to highlight the following challenges in this context.

China is constantly exerting military pressure on our borders; indulging in repeated incursions into our territory; demolishing military and civilian assets and intimidating civilians in the border areas. Presence of Chinese military in our neighbouring countries, development of military bases in those countries and strategic partnership with them with the objective of military encirclement of Bharat must be taken seriously. Some conspicuous examples of this encirclement are: arming Pakistan against Bharat; patronizing anti-Bharat terrorism there; its military activism in the PoK; attempts to control the reins of power in Nepal through Maoism; and the presence of defense experts in countries like Bangladesh, Myanmar and Sri Lanka.

The ABKM is of the considered opinion that apart from abetting terrorism and separatism from across the borders, China’s active support to the insurgent groups in our North-East is a direct challenge to the unity and integrity of our nation. Incidents of China using its cyber warriors for breaking into the information and communication systems of our country and spreading its spy network near sensitive areas by capturing projects through low cost tenders is also going to pose serious threats to nation’s security.

Government of Bharat has on one hand completely forgotten the resolution of the Parliament on 14 Nov 1962 for taking back the 38,000 sq. km territory annexed by China during the war that year; on the other hand its response to China’s new claims over another 90,000 sq km has also been woefully feeble. Government’s utter apathy towards development of basic infrastructure facilities like telecommunications, railways, roads and airports etc in view of these claims and military maneuvers of China in our border areas is ominous.

Stationing of long distance ICBMs capable of carrying multiple nuclear warheads along the Bharat’s border by China is a serious challenge. China has successfully tested anti-satellite and anti-ship missiles. It has developed nuclear submarines that are equipped with missiles, which can carry nuclear warheads and hit targets upto a distance of 8,500 kms. It is imperative on the part of Bharat to immediately develop capabilities to effectively counter these things.

Indian markets are brimming with Chinese goods thus leaving our native industry in doldrums; additionally the huge trade deficit with China is also emerging as a serious challenge to our economy. In Telecommunications area Bharat has not made any efforts to go beyond developing first generation technology. As a result all the equipment required in 3 G and 4 G technology is being supplied by China only. This is posing a serious danger to our information and communications systems. Our over dependence on China in high technology areas including power generation is leaving us permanently at the mercy of that country.

Bharat should take a firm stand against China’s attempts to divert river waters in Tibet and China including the waters of Brahmaputra and take lead in mobilizing nations that get affected by the diversion of these rivers like Bangladesh, Pakistan, Laos, Vietnam, Cambodia, Thailand and Myanmar for securing a just water sharing agreement with China.

On the western front activities of Pakistan are a matter of concern. Addressing the top military brass the Prime Minister has himself acknowledged the fact that there was an unprecedented rise in the cross-border infiltration in the last few months. According to one estimate seventy incidents of firing from across the borders or infiltration have occurred in the last four-and-half months along the Kashmir border alone. Growing influence of the fundamentalists in Pakistan Army is posing serious challenge to the safety of the nuclear arsenal there.

Recent killing of the fountainhead of global terrorism Osama bin Laden on Pakistan soil,  where he had taken shelter for years along with his family, exposes the deep nexus between the Pakistan Army and ISI and the international terror network. It needs mention here that the doctor who was instrumental in the capture of Osama is being tried on charges of sedition.

It is once again established that the ISI was involved in the recent bomb blasts outside the Delhi High Court. There is also adequate evidence that the ISI network is helping China in giving assistance to the Maoists. The links between the ISI and the dreaded Haqqani terrorist group that is active in Pak-Af region are well known.

Pakistan is relentlessly trying to destabilize the Karzai regime in Afghanistan. On the eve of withdrawal of the US forces from Afghanistan starting from next year owing to their internal situation Pakistan is pushing hard to install anti-Bharat fundamentalist Taliban regime there. Any such situation in Afghanistan will be a serious direct challenge to Bharat. The ABKM wishes to draw the attention of the Government towards these developments in the Pak-Af region. However the response of the Government of Bharat in this scenario still remains ineffective.

During the talks with Bangladesh in September 2011 adequate attention has not been paid to the national interests. Handing over of several thousand acres of our territory in Assam and West Bengal to Bangladesh under the pretext that it was already under the latter’s control can’t be justified on any account. It is unwise and unacceptable to cede more territory and get less in the name of territorial exchange. This would result in a large number of Bangladeshi Muslims in CoochBihar and Jalpaiguri automatically becoming citizens of Bharat. This will lead to serious demographic distortion in the region causing enhanced threat of separatism. It is unfortunate that the issue of millions of Bangladesh infiltrators residing in Bharat never figures in these talks. The ABKM demands that in all the treaties with Bangladesh the interests of our nation, its unity and integrity be considered paramount.

The ABKM notes with concern that the region of Indian Ocean is fast turning in to the new battleground for supremacy between the new power blocks reminiscent of the cold war days Europe. Countries of the Indian Ocean Rim are resource-rich and also strategically located in the new power-order.

Bharat has been a prominent presence in this region for millennia. The ABKM opines that Bharat’s two millennia old civilizational and cultural relations across the region should be further strengthened.

China has drastically improved its naval strength as well as its activities in the region. Its intimidating presence is leading to rising tensions in the region. On the other hand the US seems to be desperate about its distant presence in Diego Garcia and scrambling for foothold closer in the region. Creation of East Timor out of Indonesia in 2003, war between the LTTE and the Sri Lankan forces in our neighborhood, Taiwan issue etc represent the growing big power conflict in the region. This race for influence between these two countries is offsetting the balance in the region and escalating tensions.

The ABKM feels that Bharat cannot remain a mute spectator in this situation. A large number of countries in the IOR region too want Bharat’s benevolent presence to be a reassuring factor for regional peace and stabilization.

Our Government’s initiative of “Look East” is completing 20 years now. The ABKM calls upon the Govt. of Bharat to transform this “Look East” policy in to “Act East” policy and further our engagement with a large number of countries in the region. Our foreign policy objectives must be in consonance with our strategic needs.  In this connection it welcomes the new initiatives with countries like Myanmar and Vietnam.

Bharat has been experiencing the belligerence of China and its allies in the Indian Ocean region of late. Two recent incidents vividly illustrate this highhanded behavior -one between Bharat’s and Chinese Navy near Vietnam in the South Chinese Sea and another in the Arabian Sea between Bharat and Pakistan’s naval ships. From Gwadar to Hambanthota to Chittagaon to Coco Islands, the influence of China in the Indian Ocean region is growing fast posing serious challenge to our security. License for mining Poly-Metallic Sulphides in a 10,000-sq. km area in the Indian Ocean will provide China a plausible excuse to position its Navy there.

Our armed forces are capable of warding off threats from these forces. They have demonstrated their capability several times. However they seriously suffer from lack of infrastructural support as well as support for weapon’s modernization from the Government.

There is a serious disconnect between the nationalist aspirations widely present among the general public and the policy approach of the political establishment. Bharat has scientific capability, military prowess and patriotic fervor in abundance. But it is unfortunate that these aspects do not reflect in the policy initiatives of the Government.

In view of these security challenges the ABKM urges the Government to initiate effective measures to safeguard the entire national borders including the Indo-Tibetan border, sea and aerospace borders and also protect the national interests in the entire oceanic region; and adopt strong measures to counter the challenge of separatism, terrorism and infiltration. In order to counter all the security challenges before the nation, the ABKM demands that the Government should develop effective defense mechanisms and also to initiate extensive measures to achieve comprehensive self reliant in the fields of economy and high-technology. The ABKM appeals to the people to be ever vigilant on the issues of national security and prevail upon the government to take effective measures in this behalf.

Sat Oct 15 , 2011
Press Statement Sarkaryavah Suresh (Bhayyaji) Joshi ABKM, Gorakhpur: Oc 15: Public discourse taking place with regard to the involvement of the RSS in the anti-corruption movement is ill-intentioned and betrays a political conspiracy to weaken the movement. Sri Anna Hazare is a man committed to noble ideals. He has been leading […] 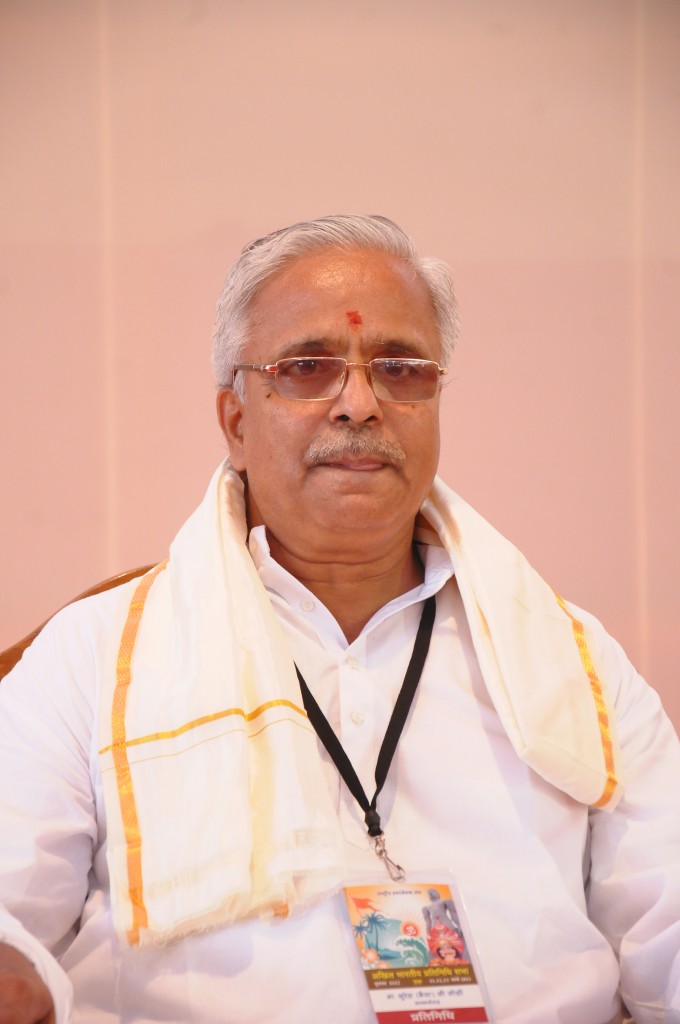