The news of most revered Sri Satya Sai Baba attaining Moksha has been received by millions of his devotees and lovers of our Dharma with profound grief and a sense of personal loss. Revered Sri Sai Baba had, in his long spiritual journey of more than 7 decades, rekindled the spirit of eternal human values of Hindu dharma in millions and millions of people all across the world and inspired them to tread the path of righteousness. Today the light spiritual ignited by his revered self pervades allover the world through his devotees who, cutting across geographical, religious and social boundaries, carry his sacred message in more than 135 countries.
Revered Baba had done yeoman service in the field of education, healthcare and socio-economic development of the poor and underprivileged people. He encouraged his disciples to open thousands of schools through which eternal Hindu sanskaras are being imparted to millions of children besides quality education. He brought waters to scorched lands of several districts and supplemented Government efforts in providing drinking waters to millions of people in Andhra Pradesh. Healthcare initiatives of Revered Baba have provided succour to millions across the globe.
Revered Baba had a special affection for the cause of Hindu unity and reform and always showered his choicest blessings on the activists of the RSS and VHP engaged in that mission. In an intuitive gesture revered Baba sent word to the RSS leaders to visit him on March 18, 2011. About 60 senior functionaries of the Sangh visited Puttaparti and received Baba’s blessings, which will remain as cherished memory for ever.
Revered Baba had ended his Leela in this Loka and attained Moksha. His spirit and message remain pervading this world eternally. We are sure millions of his devotees would continue to tread the path of Dharma prescribed by him.
On behalf of the RSS we pay our most respectful homage to the cherished memory of the great soul.

Find the copy of the condolence letter( pdf ) both in Hindi and English below,

Sri Sathya Sai Baba, the spiritual leader of millions of his devotees in India and abroad, passed away at the Sri Sathya Sai Institute of Higher Medical Sciences (SSSIHMS) at 7.40 a.m on Sunday.
The end came after 28 days of hospitalisation when doctors from the India, US and UK battled to treat multi-organ failure. He has been on ventillator and dialysis ever since he was admitted following cardio-respiratory and renal failure.
A brief statement issued by Dr. A. N. Safaya, Director of the Institute, said “Bhagwan Sri Sathya Sai Baba is no more with us physically. He left his earthly body on April 24, 2011 at 7.40 a.m. due to cardio-respiratory failure. Bhagwan ‘s body will lie in State at Sai Kulwant Hall for two days — Monday and Tuesday. Arrangements will be made for darshan after 6 p.m. today at Sai Kulwant Hall. We appeal to all not to rush to the hospital but to remain calm and have darshan in an orderly manner”. (THE HINDU)
Few file images given below, when Senior Sangh leaders including Mohan ji Bhagwat, K S Sudarshan ji, Ashok Singhal and several others met and discussed various socially concerned issues few years back.

NELE:Shelter for the homeless children

Wed Apr 27 , 2011
27th April,2011 Nele Namma Mane, a home for underprivileged children, provides shelter for children rescued from the streets or from abusive and neglectful parents. Many of the children are brought here by the police or social workers to prevent them from falling victim to crime and social evils, writes Aruna […] 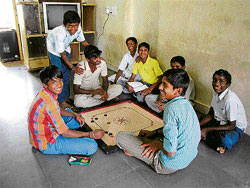