RSS has extended its supports for the movement initiated by Baba Ramdev . Baba Ramdev all set to launch a massive hunger-strike campaign from tomorrow, June 4 at New Delhi  for a cause of pressurising UPA government to bring back  black-money and to declare it as national asset and related issues. Here there is a media report on the same:

New Delhi The Congress-led UPA is on bended knee trying to placate Swami Ramdev in the run-up to his fast but it’s the Sangh Parivar, specifically the RSS, that could hold the cards.On May 27, eight days before the scheduled start of the fast on June 4, a written circular, signed by RSS general secretary Bhaiyyaji Joshi, went out to provincial organisers. The note specifically asked them to instruct swayamsevaks to support and participate in Ramdev’s programme — those who could not go to New Delhi would participate at the district level, was the message.

When contacted, Ram Madhav, member of the RSS’s national executive, said: “The Sangh has asked its swayamsevaks to participate in and support this fight against corruption in Delhi and in the districts.”

By all accounts, the Baba the UPA government now seeks to so strenuously placate is backed by the RSS in ways that the other satyagraha led by Anna Hazare wasn’t.

The imprint of the RSS was clear in the first week of April at Jantar Mantar, be it in the conspicuous use of a portrait of Bharat Mata as stage prop, or the formal attendance marked by a team of RSS office-bearers on Day 4 of Anna’s fast. It isn’t incidental that among the first chroniclers of Anna’s experiments in Ralegan Siddhi was one written by the RSS’s H V Seshadri.

But, according to sources, cracks soon appeared in the cosy relationship because of RSS “reservations” about those who flocked to Anna’s side from the other side of the ideological fence. The RSS was uncomfortable with friends of Anna like Swami Agnivesh, who is seen as sympathetic to the “Maoist cause” and others like Mallika Sarabhai and Medha Patkar, who were quick to join issue with Hazare over his certificate to Narendra Modi.

In the RSS’s view, with Ramdev at the helm, the danger of the “ultra-Left” flocking to the “anti-corruption crusade” is significantly diminished.

While the RSS professes “good relations” with all senior swamis and godmen, its relationship with Ramdev is special. There have been markers, from both sides. Then RSS sarsanghchalak K S Sudarshan was the chief guest at the inauguration of the Patanjali Yogpeeth founded by the yoga guru in 2006. Ramdev was present at the conclusion of the RSS’s four-month-long Gau-Gram Yatra at Nagpur last year.

A potential blip in the relationship was sorted out more recently. Ramdev’s proclamation of intent to float a separate political party last year had worried the RSS. According to sangh sources, the yoga guru had approached the RSS top echelons for support to the yet-to-be-formed party.

Sources said a small team of RSS seniors discussed the matter of a separate political party by Ramdev at the Akhil Bharatiya Pratinidhi Sabha, the highest body for policy formulation and decision-making, held at Puttur in Karnataka from March 11 to 13 this year.

There was a difference of opinion on the issue — one section of the RSS was of the view that the Sangh must support the new party when it is formed. The BJP, according to this argument, had fallen short of its role of political vehicle for the Sangh worldview and ideology. But the dominant view, that the Sangh would be better off repairing the outfit in hand rather than backing a new one, prevailed. This view emphasised the need for unity of Hindutva forces and the necessity of preventing a division in their shared support base.

The RSS message was delivered to Ramdev — that the Sangh would support his aandolan, but would be forced to withdraw the open support of its cadres if the yoga guru insisted on launching a separate political outfit. According to sources, it played a key role in Ramdev’s recent reticence on the political party issue that he had talked up with much fanfare only a year ago.

“I have been actively associated with Ramdev’s programmes since two to three years,” he said. Most recently, Govindacharya participated in Ramdev’s Bharat Swabhiman yatra in Goa and Nagpur. On Ramdev’s impending fast, he says: “When elected representatives fail to act as custodians of the people’s trust, society won’t sit idle… we need an opposition to corruption outside of the arena of power politics”.

Fri Jun 3 , 2011
A new news website  www.newsbharati.com is launched.  The website includes major news, reports, info related national issues and also the programmes, news reports and activities of national interest. News Bharati is an initiative of a team of professionals. It can be best described as a profession with a mission. Through […] 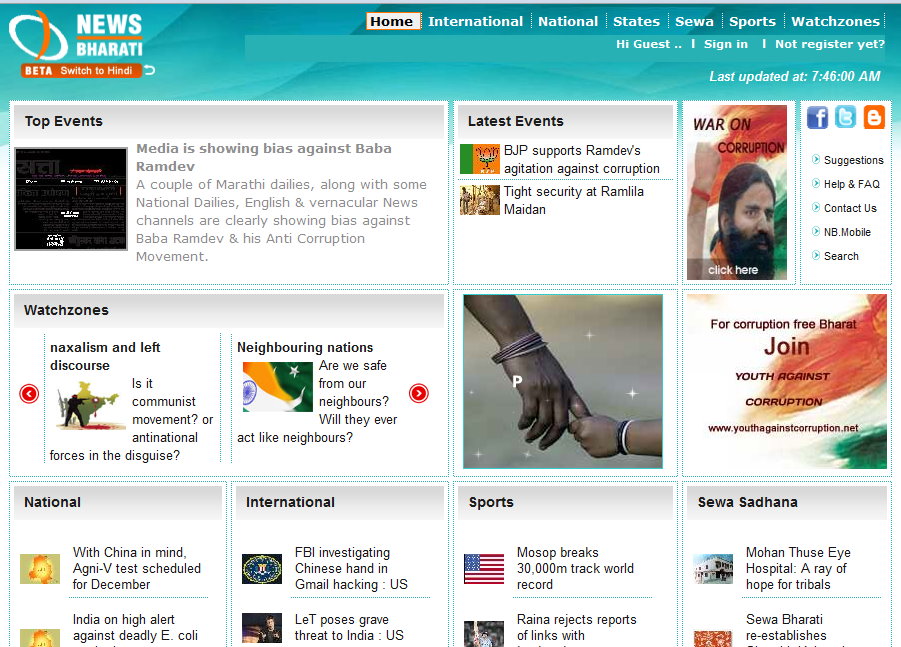