A pleasant surprise awaited us yesterday. We were all at the all-India meeting of the Prant Pracharaks (Provincial Organisers) of the RSS. This meeting was held at a far off North Eastern town of Tinsukia. The meeting was being held at a very serene and scenic school complex of the Vivekananda Kendra. This one was one of the oldest schools started by the Kendra in the North East.

We were cut off from the rest of the country and the world for the duration of the meetings. There were about 175 of us – all the senior functionaries from the RSS and several important full-time organisers from various like-minded organisations like the VHP, BMS, ABVP, Vanvasi Kalyan Ashram, Vidya Bharati and the BJP.

North East wakes up early. By 4 in the morning you would witness daybreak. Sun sets off early too, latest by 6 in the evening. Ideally Bharat should have two or three time zones like the US. At least the East and North East Bharat should have a +1 hour time zone from the rest of the country. That would save a lot of energy and time for this region.

We were completely cut off from the developments in the rest of the country not only due to the distance and allied factors like occasional poor mobile network coverage etc but also due to the intense deliberations taking place on various important issues and plans being drafted for future campaigns. It is normal with Sangh functionaries because of the back-to-back nature of the meetings and the insistence upon diversionless attention on the work at hand.

It is natural that in such a scenario we would miss the news about a tragic accident like the one happened to the Delhi-bound Kalka Mail on 10 July morning. It had apparently happened at around noon on that day. However I was alerted by an NDTV mobile alert when I turned it on at around 2 pm. Our session was to commence soon. So I rushed to locate the Prant Pracharak of Kanpur with the news. The accident area falls in his province. Somehow I couldn’t find him before the start of the session.

Finally at 3.30 pm we could meet. I told him to activate our Swayamsevaks near the accident place as also the other nearby paces for necessary help to the affected passengers. It was a ghastly accident. Two general compartments were very badly mangled. We got the information that at least 60 people have died and hundreds injured. What appalled us was that till 4 pm the Railway Accident Relief train had not reached the site of the accident although it was just a 4-hour normal train run time away at Allahabad. It speaks volumes about the inefficiency of our system.

Our phone went to the key functionary in Kanpur. He was so busy that he could barely speak to us for a minute; he was rushing to the hospital where several injured had arrived. He had already asked a number of Swayamsevaks to reach there anticipating need for blood and other help. We tried for the district secretary of the organisation in the affected area. It took a while, series of phone calls back and forth, to locate him. For several hours he was busy organising relief at the site along with more than hundred Swayamsevaks. Lastly we tried to reach out to the local head of the organisation, a doctor by profession. He told us that he was busy attending to the injured people in his own hospital as dozens of them had arrived.

Should we not feel happy? Here is a voluntary group of socially-conscious individuals which is in full force attending to the victims. They didn’t wait for the orders to come from above in the command structure, which in this particular case is far removed from the event. They didn’t even bother to inform the so-called higher ups. Only thing that occupied their thoughts at that moment was perhaps the duty to help the suffering passengers. Contrast this with the delays in the response of the Government machinery. It happens mostly because of the command structure.

By evening it was all over in the news. For a change the TV channels were showing visuals (which they would normally avoid by turning their cameras away) of Swayamsevaks involved in the relief activity. True to their intrusive style they managed to interview a couple of Swayamsevaks also. Ideally we would have expected our Swayamsevaks to avoid media bytes etc in such situations. But sometimes the intrusive style of the media becomes too much and one or two end up in minor violation of that fine line of the organisational culture.

I am writing this not to suggest that only Swayamsevaks respond in such times of calamity. Many other socially conscious individuals too do. But the Swayamsevaks enjoy a distinct advantage. They are mentally better trained and equipped due to their RSS background to respond to such situations. Also, they have an organisational structure to maintain orderly management of such otherwise chaotic situations. Perhaps the military enjoys this advantage besides the Sangh. Thirdly and most importantly the RSS has a network that can handle all the needs in such situations – doctors, blood donars, helpers, transport, food, security. You name it and you have people in the organisation who can be immediately put to work. This network of inspired individuals is what the RSS has created as an asset for the country.

They will be there wherever and whenever required. I am reminded of the day after the police crackdown on Baba Ramdev’s Satyagraha camp at the Ramlila Maidan in Delhi. At 5 in the morning on 5 June I saw more than 200 Swayamsevaks at the Jhandewala HQ of the organisation in Delhi. They were to disperse in various directions – to railway stations, hospitals, public parks – to extend help to the victims of the Police brutality. While all the leaders were busy making statements here was a band of young men which was silently scouting the streets of Delhi and helping the victims.

In the true tradition of the RSS, of course.

Tue Jul 12 , 2011
12 yrs on, Kargil battlefield turns into polo ground AZHAR QADRI DRASS (KASHMIR): From being a war zone 12 years ago, the sparsely populated town of Drass in Kargil district has recovered from the battle scars.   The road to Drass goes through god’s forgotten lands — there is silence […] 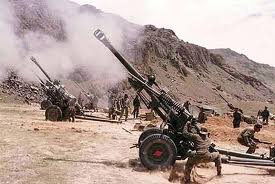