He was briefing the media of Bangalore about the proceedings and discussions of recently held 3-day meeting of the Akhil Bharatiya Karyakari Mandal (ABKM) of the Rashtriya Swayamsevak Sangh (RSS), from October 14 to 16 at Gorakhpur Uttarapradesh.

Speaking on the occasion Hosabale told, “Akhil Bharatiya Karyakari Mandal, has passed a major  resolution on National Security. ABKM is gravely concerned about the indifferent attitude of the Government towards growing tensions along the borders; rising incidents of encouragement to separatism and terrorism from across the borders; emerging challenges across aerial and oceanic borders; and increasing threats in the international seas and outer space”.

“In flood affected areas of Orissa, regions of Earthquake at Sikkim, hundreds of RSS Swayamsevaks were  involved in rehabilitation activities. Uthkal Seva Samithi, Seva Bharati and several onther co-organisations are doing their services to the victims of these natural calamities. RSS Swayamsevaks reached these spots soon and within 12hours and they initiated the rehabilitation process” said Dattaji.

“It will be the 150th birth anniversary of Swami Vivekananda on January 12 of 2013. Hence Sangh has decided to launch massive nationwide Centenary celebrations on Vivekananda from January 12, 2012 on 3 issues. First, a compilation of various social organisations which are working in small and large scales across India so that a commonness will be achieved and this task will be headed by Swami Vivekananda Kendra of Kanyakumari. Vivekananda, even after 150years, still an inspiration for social works” says Dattaji. “Secondly, Vivekanda and his thoughts on Women, and Third Vivekananda and Rural India. Vivekananda was very much keen on Rural development specifically the upliftment of poor and backwards. His quotes like ‘Daridra Devobhava’ symbolises his in deeper concerns on common man,” Dattaji opinioned.

“At the very spot where in 1893 September 11 Vivekananda’s historic speech took place at Chicago, we are planning for a permanent multimedia presentation which could give basic information on Life sketch and contributions of Vivekananda. His thoughts on universal brotherhood and others can be taken to a larger scale for new generation”  said Dattaji.

RSS Joint Secretary further said “In ABKM, we discussed many issues on national security. RSS feels the borders of the nation should be highly secured. As per reports in last one year, more than 70 times there were incidents of exchange of bullets by Pakistan at the borders. Osama Bin Laden was hiding in Pak, Dawood is hiding in Pak according to reports, and hence it is clear that Pakistan is highly supportive for terror activities. Recent Delhi High court blast is a fresh example”

“China is a major threat, it is eyeing Indian geography from all four corners. Through Burma, Trincomalee, Sri Lanka and Gadwar  Harbour of Pakitan, China selectively planned for India lands. The strategy of China is Encircling, Encouraging and Engaging. China has already captured 38000 sq kms of areas. Now it is claiming for 90,000 sqkm of land. China will make this as an International issue, and may take Indian Land areas near the Chinese border. Already China is welcoming citizens of Arunachal Pradesh even without Visa; so that mentally they can influence people of Arunachal as if they are belong to China. Hence as George Fernandes said China is Indeed our threat no 1” said Dattaji.

‘China is preparing its national army stronger day by day. Nuclear submarine war heads was recently developed by China, which India doesn’t have . The Country which attacked India 50years ago, may repeat the same after 50 years, is an alarm for us’

“RSS calls the public to ban the use of Chinese products which has a large scale impact on Indian economy in multiple ways. Chinese goods like toys, electronic devices, utensils, even  Idols of Hindu God like Ganesh are in Market. Hence we need to promote our Industrial growth rather than buying Chinese goods”, says Hosabale.

“Border issue with Bangladesh is indeed a cause of concern since decades. But recent visit of our Prime Minister to Bangla has increased the risk of losing more land to Bangladesh due a weak border strategy. There are 111 enclaves belonging to Bangladesh in India and 51 enclaves belongs to India in Bangladesh.  As a matter agreement on retaining these enclaves within respective territories of countries, the loss will be for India in which India will lose its land more than 10,000 acres. if Infiltration is very high, citizenship will be a problem. Bangladeshis are illegally penetrating to India, gradually they are becoming Citizens of India by obtaining all civic facilities. Hence RSS expresses deeper concerns over Bangla Infiltration. Unfortunately, the central Government is not acting enough to solve these threats. RSS will launch a nationwide awareness campaign about these elements disturbing national security”, said Dattaji.

RSS to launch campaign from Nov 1st till Nov 20th

RSS to launch campaign from November 1st till November 20th against the proposed Communal and Targeted Violence Prevention Bill-2011 which is well fabricated to appease minority. RSS already condemned and clarified the stand on the bill saying that it is an anti-Hindu Bill.

Answering to the questions from Journalists on Former Chief Minister of Karnataka B S Yeddyurappa,  Dattatreya Hosabale said, “The recent episode of Yeddyurappa is embarrassing to the RSS. Whenever BSY visited Sangh Headquarters, Keshavakupa, RSS Senior Functionaries advised him as he was a Swayamsevak.If he has not taken those advises seriously, it is wrong to blame RSS. If in a class of the 2 students one scores 90 marks and one scores 35 marks, we can’t blame the teacher for poor performance”

One thought on ““RSS to celebrate 150th birth anniversary of Vivekananda, nationwide” says Dattaji at Bangalore”

Sat Oct 22 , 2011
RSS National General Secretary Dattatreya Hosabale at Press Meet Bangalore. Bangalore, October 22: Answering to the questions from Journalists on few BJP politicians who were part of the government and were known Swayamsevaks, now behind bars for corruption charges,Dattatreya Hosabale told, “Indeed these incidents made us embarrassed. We advise our swayamsevaks […] 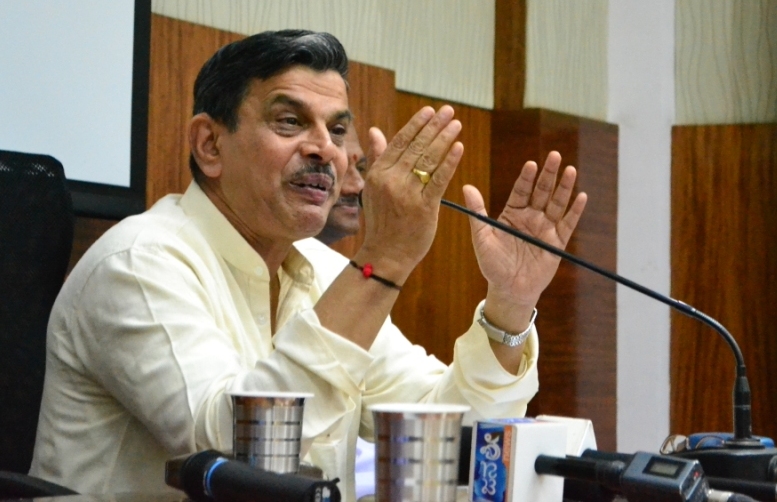