One thought on “Seva Bharati dedicates another bunch of houses to flood victims, this time at Raichur, Karnataka” 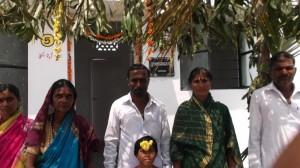