Our opposition to FDI in retail sector is total

BJP chances are bright in UP

Buoyed by the tremendous response to the Jan Swabhiman Yatra in Uttar Pradesh which covered 61 Districts and 375 Assembly segments, the former BJP chief Rajnath Singh feels that the BJP is bound to emerge as the single largest party in the State in the next Assembly elections slated for early next year. He says that the people have realised that only the BJP is capable of providing a purposeful, clean and development oriented government in Uttar Pradesh.

Logically arguing that the Congress has committed a major blunder by trying to promote multinational companies in the retail sector when food prices have skyrocketed and the western economies are declining at a fast pace, Rajnath Singh said the Congress has lost all its credibility with the people because of its communal politics, rampant corruption and proclivity for crony capitalism which help only those who are partners in the crime. Shri Singh said the BJP will oppose with all its might the Congress ploy to sell Indian retail sector to transnational corporations under pressure from foreign countries. Excerpts from the interview with Organiser editor Dr R Balashankar:

What is your assessment of BJP’s prospects in the next year UP Assembly elections?

I was pleasantly surprised by the overwhelming response from the people. The people are waiting for a change and whenever elections are held they will massively express their disapproval of the regimes both at the Centre and the State. There was such an emotional outpouring of support for the Yatra that at every place lakhs of pople came out to greet us. Now there is greater appreciation of the good work of the BJP government in the State and the NDA government of Shri Vajpayee. And we are sure this positive goodwill is bound to make a difference in the poll outcome.

What was the idea of your yatra when there are a few other such exercises also in progress? Do you think, the yatras of the SP and the Congress will cut into your prospects?

Certainly not. We have our niche constituency and our record is so different and positive that others cannot cut into our support base.  In two phases our two Jan Swabhiman Yatras covered the entire State. It was a serious effort to directly contact the people at all levels, understand and share their agonies in the long interregnum when the BJP was out of power and the SP and the BSP successively ruled the State for the last eight years. People are sick and tired of the never before seen corruption at all levels, total absence of governance, developmental activities, price rise and the deteriorating law and order situation. The feeling I noticed was that voters are ready for change and the BJP is the best alternative.

Since 1999, the BJP has been on the decline because of infighting and rebellion by senior leaders. Are you in a position to get an absolute majority?

True. There were organisational problems. There was lack of coordination at various levels. The absence of Atalji in the scene actively was also felt widely. But the cohesion in the party has increased in recent years. We are geared up for the polls. The cadre was activated during these yatras. And I can say by the time the elections are announced we will be battle ready.

The BJP seems to be late in preparation. You have also not presented a united front and there is no clarity on your chief ministerial candidate. What is your view in this regard?

These are not major problems. The ground is ready. We will declare our candidates by the month end. The candidate for the top post will be selected  by the party legislators after the polls. I am in national politics and not a candidate for chief ministership. People will vote for the party, because they are tired of the misrule of Samajwadi Party earlier and the BSP now. These parties have given shelter to corrupt and criminal elements. Now the Congress is welcoming with garlands deserters from these  parties. This has created a revolt in the Congress with traditional party workers finding themselves sidelined. Anyway Congress is nowhere in the picture. The much media hyped Congress rallies witnessed poor response from the public. The party is also weighed down by the inefficient, corrupt and paralysed government at the Centre.

There were reports that Mayawati was trying to come closer to BJP.

There is no truth in this. I have always been opposed to any truck with the BSP right from the beginning. Our earlier support to Mayawati weakened our party severely. We will not repeat that mistake again.

There is a general feeling that at the Centre your opposition to the UPA regime has been very soft and confused.

This is not true. We cannot afford to be soft on UPA which in its present condition is a national disaster. The people are on the edge, they are getting restive and impatient, the masses are so angry with the UPA misrule that anytime it can break the ceiling and blow out in the open. The success of Swami Ramdev and Anna Hazare agitation against corruption has in a way channelised public anger in a big way. The BJP is doing everything to expose the misdeeds and incompetence of the government

What is BJP’s stand on the Retail FDI, Pension Bill and other economic agenda of the UPA?

Our opposition to the FDI in retail is total. There is no way we can support it. In the first place there is no need for this. In fact in the last seven years the UPA has systematically instigated a capital flight from this country. The industry leaders in the country have been complaining that the investment atmosphere has become intolerable under the UPA. The government has failed on all fronts and now it has brought the FDI as a gimmick to divert attention from other issues.

At one time it was felt that your party was not very sure about opposing retail FDI. What is your view?

There was no stage when the party’s position was not crystalised on this. From the beginning we were opposed to it. That is why so far it was delayed.  It will destroy our farm sector. It will make the Indian farmer bonded labourer of the MNCs. They will dictate our farm produce, they will determine the price, they will dictate our yield and force the farmers to cultivate genetically modified Bt. Cotton, vegetables and fruits. It is a total sellout of the Indian farm sector to the MNCs by the back door.

Do you accept UPA’s claim that this will generate employment?

No way. We have studied the negative impact of the entry of retail chain. This will render over five million retail traders jobless. Indian markets will be dumped with Chinese and other foreign goods. Our farmers will get a raw deal. And the consumers will get cheated, with high price, monopoly, stale and discarded foreign goods. There is a big scope for a swadeshi agitation at this stage against this exploitation.

Do you think the government has not factored in all these aspects when it took this decision?

I cannot say that. This government is lazy and it rarely takes any decision. It acts under pressure. And I am sure, it took this unpopular decision under pressure.

The government has been talking about giving a new deal to the Indian farmer. Do you agree?

For long our farmers are being neglected. Farmer suicide has now become a daily happening. Only that these days they are not being reported. These suicides are bracketed as accidents, epidemics and unrelated to crop failure. As Union Agriculture Minister I had introduced a Bill to cover all farmers under a crop insurance scheme. This would have protected farmers from crop failures, low yield, attack  of crops by insects, etc. It is the farm indebtedness that lead to suicides. Loan waiver is only a temporary solution. When the UPA came to power in its first budget presentation, then Finance Minister P Chidambaram had commended our insurance scheme and promised to implement it. But since then it was buried. It shows how insincere this government is about protecting the farmer. Even the Swaminathan Committee recommendations are collecting dust for the last many years. It is high time we should take a fresh look and formulate a viable farm policy. In the absence of this no food Bill can work and there will be high food price and starvation deaths. 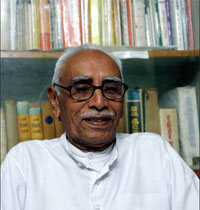