(With teachers and friends on different occasions)

Q : What is your opinion about the prevailing educational system in our country?
A : It has neither the good elements of the modern system prevalent in the West nor the positive content of our ancient system. Our young men do not even know that we have an ancient history rich with excellence in all fields of life. In the absence of any positive goal before the student, no wonder he takes to reading vulgar and foul literature to while away his time.

Q : You once said that the study habits have deteriorated these days. In what way?
A : Study of text-books and reference books by standard authors are given a go-by. ‘Short-Notes’, and ‘Questions and Answers’ have become the fashion of the day. Private tuition appears to the students to be another such easy way to pass. All such short-cuts have only ruined the student’s initiative, will and his ability to understand.

Q : But are not teachers also responsible for this to an extent?
A : Yes. A teacher should, in fact, feel it an insult to his caliber and devotion to duty if his students are required to take tuitions. Some teachers in fact actually goad their students to come to them for private tuition. This will affect the student’s moral fibre also. They will begin to feel that they need not do their work honestly. It is this loss of moral integrity that makes students take to immoral means to get through the examinations when all other short-cuts fail.

Q : How to rectify this?
A : The right attitudes and aspirations have to be implanted in the young minds right from the elementary school stage. For that we should draw upon the limitless storehouse of our ancient as well as modern literature which depicts our mighty national heroes and events. Especially our young men must be made to feel proud of being born in the great lineage of Rishis and Yogis. We must live as Hindus, we must appear as Hindus and also we must make ourselves felt by the whole world as Hindus.

Q : Will that not project an adverse image of our country in the eyes of the world?
A : On the contrary, it is only when we learn to respect ourselves that we can hope to command respect from the outside world also. In fact the world wants us to be true to ourselves and not to become mere carbon copies of some X, Y or Z.

Once a Frenchman came to me. He was invited for food. He gladly sat on the floor and took our food just like us with fingers – no spoon, no fork, no table. He said that he relished it all the more, and remarked : “When we come to you we must know and experience your ways and specialities of behavior and customs. Otherwise where is the fun in our coming all the way to your country?”

The ‘Edinburgh Review’ wrote as far back as 1872 that the Hindu is the most ancient nation on earth and it surpasses all others in its wisdom, charity and purity. But unfortunately we, the children of such an ancient and great race, have ourselves fallen a prey to foreign propaganda and forgotten our ancient history and heritage. A race with its roots pulled out can have no future.

Q : Have you any suggestion for improving the atmosphere in the schools?
A : Once I went to a school in Nasik. A number of pictures were put up on the walls of the corridor. But all of them were scenes depicting battles and such other things from Europe and elsewhere. Not one was from history or our epics. I asked the Head Master how these pictures could inculcate the right spirit in our younger generation. Why not have the pictures of the battles of Haldighat, Panipat etc., I asked. To that he remarked that one should not have a narrow outlook limiting one’s horizon to the country. Jawaharlal Nehru told me that we must keep open the windows to allow the breeze from all the sides to come in. Then I said to him that what is happening today is not throwing open the windows, but pulling down the walls on all the sides and bringing down the roof on our own heads! Such perverted notions of internationalism and similar other high platitudes are playing havoc with our young minds.

Without the firm base of nationalism, to speak of humanity and internationalism would be losing at both ends. And so far as our national philosophy and heritage is concerned it has always embraced within its fold the highest good of humanity. As such, preaching of our nationalism will strengthen the human values also.

Q : Can we say that the present day education is without purpose?
A : Once I saw a poster carrying an advertisement ‘Earn while you learn’. Well, our view has been quite the reverse of it. We say, ‘Learn even while you earn’. Ours is the concept of a lifelong student. It all depends upon the aim of life that we put forth before ourselves.
The irony of the present state of affairs is that the West is gradually waking up from gross materialism to spiritualism, whereas we are drifting from the better and higher life to one of mere materialism.

Q : How can we introduce religious education in our schools without bringing in any particular religion as such?
A : Certain fundamentals can be accepted, viz., belief in a Universal Being pervading the entire universe, and having the realization of that Supreme Principle as one’s aim of life.

Q : What are the courses to achieve that?
A : There are many. But broadly speaking, whatever may be the way, controlling the mind and preventing it from going the evil way is the basis. The principles of Yoga form the basis for all religious life, whatever the denomination of one’s faith be. Concentration of mind requires some training in Yoga. Emphasis should be on instilling shama damaadi shatsampatti (the sixfold virtues like tranquility, self-restraint) in the children. Now, in the present system, only some information and bread-earning tuition is all that is imparted.

Q : Is there any defect in the present system of teaching Sanskrit?
A : A lot. For example, there is no attempt even at the college level to make the students speak simple Sanskrit, as it is done in the case of English. The thesis for doctorate in Sanskrit – our classical language – is written in English! Such Ph.D.’s often cannot even speak a few simple sentences in Sanskrit. One such ‘doctor’ told me that the thesis will be considered by the committee only if written in English. I asked him if a thesis on English submitted in one of our languages would be accepted? That very idea appears to be preposterous! That friend told me that if one has to acquire a doctorate in the classical language of England, i.e., Latin, one has to learn reading, writing and even speaking in that language. One has to learn the art of composing poetry (whatever its quality) also!

Now in Mumbai, high school students are asked to choose between Science and Sanskrit. Naturally, the best students opt for Science. Is it the way to promote Sanskrit? Most of the European languages are better developed than Latin. And yet there is more Latin study in Europe than Sanskrit study in Bharat. There seems to be no appreciation of the national integrating value of Sanskrit education. The main drawback with us is the lack of love and will to develop our own languages.

Q : Probably preparation of text-books might present great difficulties.
A : No. I give an example. Once, before Independence, Rao Bahadur Shri Kelkar was the Education Minister of Central Provinces. As soon as he became the Minister he switched over the medium of instruction from English to Hindi and Marathi. An Englishman, who was the D.P.I., became furious and vehemently opposed the move. But Shri Kelkar was firm. He told the Englishman bluntly, “Well, you are only a director under me. You must carry out my instructions.” The other officials pleaded that preparation of text-books in Hindi and Marathi would present insurmountable difficulties. But Shri Kelkar brushed aside all those objections and ordered for the immediate implementation of the new policy. Of course, text-books were got ready, the students took to the Hindi and Marathi media with great enthusiasm and the new policy turned out to be eminently successful.

Q : Nowadays submission of theses in Hindi for doctorates is permitted.
A : For that, the issue had to be fought out in a court of law some years back, by a student who wrote his thesis in Hindi and challenged why it should not be accepted.
I fail to understand why this phobia with regard to our national languages has stuck to the minds of our educationists. Now, for example, there is no one who speaks Latin. No books are produced in that language. But still, speaking and writing in that language is a must for a doctorate. On the contrary, Sanskrit is a living language. There are many who speak it. Even today books and papers are published in Sanskrit. With all this, Sanskrit is taboo!

Q : Can we dream of our Government ever having the moral basis of Dharma for our education?
A :It need not be a mere dream! If all right thinking persons decide to have it, it will be a fact. The Government is always a reflection of the people. The people get what they deserve.

Q : What is the special feature of the Hindu concept of education vis-à-vis the modern system?
A : Recognizing and bringing out the diverse talents latent in man is taken as the cornerstone of modern education. The modern system has yielded substantial results too. We find men of great achievement in the various fields of arts and sciences in all modern countries. Merely stuffing of information into the brain and making it a lumber room, as is done in our country, is not its aim.
The Hindu concept of education goes further. It does not content itself in merely drawing out the latent physical and intellectual faculties in man. According to us life is not a mere bundle of desires and passions; there is an Ultimate Reality residing within us. To realize and manifest that is the basic aim of our system of education.

Q : But, how?
A : Our great Rishis have given detailed instructions with regard to its procedures. The teacher has a vital role in executing them. To start with, he has to inculcate in the students the ten principles of yama and niyama. Even if a small number of students in a school imbibe the spirit of yamas and niyamas, they will be able to spread a healthy atmosphere so that others also will follow them in course of time.

These principles need to be told to the young minds in an interesting way. When I was in the middle school we had a teacher, who, apart from his school teaching, used to tell us various stories from our ancient Puranas – very interesting and instructive. It is such stories which have been building up our tradition and character as a great and unique people.

Fri Sep 2 , 2011
By Mulkh Raj Virmani, ORGANISER SAFETY of cows of Bharatiya breed has all along been a matter of concern. Lovers of cow have run several movements culminating in supreme sacrifices made on November 7, 1966 agitation at the Parliament Street in New Delhi when innumerable people particularly several saints were […] 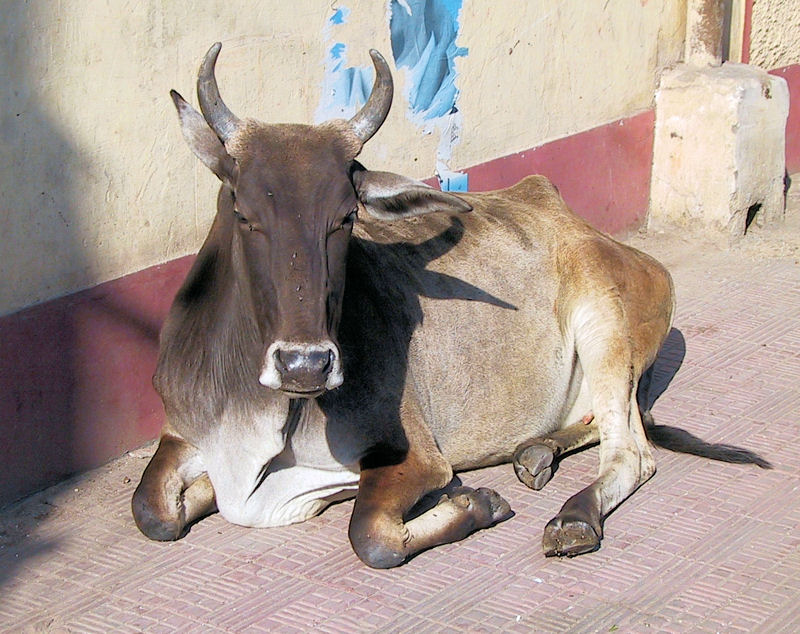