The Union Home Minister P Chidambaram recently said the RSS had decided to launch a movement with Ramdev in Puttur, Karnataka. How do you react to this statement by a senior minister in the government?
The allegations against the RSS are being made to divert attention from a series of corruption scandals and the black money stashed in foreign accounts abroad, as well as to misguide the people of the country. Ramdev has been working on the issues of black money and corruption for the past one year. He has been meeting several people to gather support. He also met members of the RSS.

But, to say the RSS started the entire movement is only an attempt to take away the attention from the problem of corruption. It is Ramdev’s movement and the Union government has failed to acknowledge the support he has received from his followers. We had passed a resolution in the Akhil Bharatiya Pratinidhi Sabha at Puttur in March, demanding an end to corruption, and that the government take steps to bring black money back. Accordingly, we decided the members of the RSS would lend support to any anti-corruption movement.

When there are anti-corruption movements in the country, the home minister seems to be concerned only about the people who are behind these movements. He is not interested in taking the necessary steps to solve these problems. The people are worried about corruption and black money and they feel let down.

There are allegations against social activist Anna Hazare that he is taking directions from the RSS. Why do you think some members of the Union government and political parties are making these allegations? The RSS had supported Anna Hazare’s movement…
Anna Hazare has been working in the field of social work for the past 25 years. He is inspired by the works of Mahatma Gandhi. He has been taking the lead in carrying out awareness and development programmes, and such a person doesn’t need directions from anyone else.

As far as we understand, Anna Hazare tried to take support of every political party and social organisation. The RSS believes there has to be a continuous effort for the betterment of society. All of us should rise above partisan feelings and support such movements.

We suspect a section of people are making these allegations to make the entire movement weak. More so, if we look at the people around Anna Hazare, there are some who are against the RSS. They are making these statements because of their ignorance and political motives.

On the night of June 4, when Delhi Police personnel started a crackdown against the followers of Ramdev, he was seen running around wearing women’s clothes. Does the RSS believe these are signs of a good leader who can lead mass movements?
Such inhuman measures against peaceful protesters and violation of human rights are not the correct steps taken by any government. First, we condemn the action of the government. Ramdev claims to have reliable information that there was a conspiracy by the government to eliminate him, had he not tried to escape. If we see his action in the context of a long-term movement and to protect oneself to lead it, it was not wrong.

The Congress believes the RSS is using undemocratic means to win power and it is planning a major awareness campaign. How will you react to that?
Interestingly, these allegations are being made by the same people whose undemocratic faces get exposed from time to time.

It is the same party that had imposed the Emergency in 1975 and curbed the democratic rights of the people. How can we expect them to honour democracy?

After the tragic death of Indira Gandhi, the entire Sikh community was blamed for her assassination and brutal riots started against the community. We would like to ask the Congress what face of democracy was that?

The RSS has always believed in raising its concerns within the Constitutional frame of our country — be it a satyagraha after the death of Mahatma Gandhi in 1948 when the RSS was blamed and banned, or the satyagraha demanding the termination of the Emergency and restoration of democracy in 1975. To make allegations like the RSS is undemocratic only brings out the undemocratic mindset of the government.

There are various social activists who have waged a war against corruption, but no political party has managed to project itself or take advantage of it. Is there anyone in the Bharatiya Janata Party (BJP) who could not only lead the movement, but lead the party against the ruling UPA government in the 2014 Lok Sabha elections?
First, we believe such issues that concern the people of our country must not be seen as political or election issues. Today, political parties are unable to raise these issues and have been unable to take the lead in these agitations.

As far as the BJP is concerned, we think the party believes in collective leadership and efforts and they have many such leaders in the party.

As far as the elections are concerned, we would not want to comment. When people work together as a team, such questions are irrelevant.

There are allegations against Swami Aseemanand and Pragya Thakur that they were responsible for bomb explosions in the country. Is the movement against corruption a counter offensive by the RSS?
The cases against Swami Aseemanand and Sadhvi Pragya Thakur have been doing the rounds for the past two years. All the cases are now under investigation or in the judicial process. Calling these incidents ‘saffron terrorism’ or Hindu terrorism projects the Hindu society in poor light and is an insult to the society. Even before any final verdict is given by a court, making such baseless allegations is nothing but dishonouring the judicial process and exposing one’s narrow-mindedness.

The RSS has already organised a nationwide protest on this issue on November 10, 2010, in which more than a million people participated in 703 places. Soon after, we conducted a door-to-door campaign to make people aware of the propaganda. Our members personally met 10 million people throughout the country. The RSS has been organising such mass awareness campaigns at different times in the country. It is not correct to link these issues with the problem of corruption and black money stashed in foreign banks.

Mon Jul 18 , 2011
New Delhi The RSS took a snipe at Digvijay Singh, who had accused it of ‘spreading terrorism’ and ‘making bomb factories’, saying it ‘pitied’ the Congress leader who was acting as a ‘street bully’. The Sangh fountainhead said neither Singh’s party nor the government takes his statements seriously. “We pity the […] 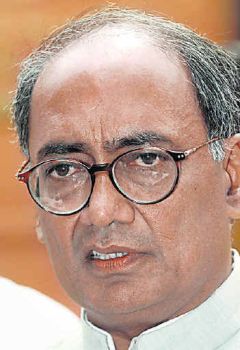