Detect and defeat this danger
By Dr Manmohan Vaidya

THE midnight crackdown on non-violent, peaceful and sleeping satyagrahis by Delhi Police at the instance of Central Government at Ramlila Maidan on the night of June 4 was condemned by one and all. The satyagraha, organised by leading yoga guru Baba Ramdev had received unprecedented support from all sections of the society. The use of tear gas and brutal lathicharge on unarmed and sleeping satyagrahis and that too at midnight exposes the Nazi mentality of the UPA government led by Congress Party. The security forces of this suppressive and cruel government did not even spare the helpless women, children and aged people. The condition of Rajbala is said to be very critical. Even if she survives she may not be able to stand on her feet in rest of her life. The truth of police brutality was evident from the heaps of slippers and luggage of the satyagrahis scattered here and there in Ramlila Grounds. The media successfully aired this news across the world.

Union Home Minister P Chidambaram, in his statement issued on June 9 which was widely covered by the media, justified the suppressive police action saying that the organisations like Rashtriya Swayamsevak Sangh and Akhil Bharatiya Vidyarthi Parishad were supporting the movement. Does the Home Minister want to say that the brutality was justifiable because the movement against black money and corruption was supported by the RSS? Is it anti-democratic if the countrymen, disturbed over the acute failure of the government in curbing corruption, try to make the government realise its constitutional duty through peaceful and non-violent means? Was the satyagraha by Baba Ramdev an undemocratic act? Is it democratic as well as justifiable to commit brutality over the peaceful and sleeping agitators at night, and also to forcefully prevent the people who tried to put off the fire caused (or deliberate) on the dais? Can this type of brutality and inhuman activity be justified just by saying that it was supported by the RSS? This whole episode exposes the fascist mentality of the Congress-led government.

The Rashtriya Swayamsevak Sangh has passed a resolution at its Akhil Bharatiya Pratinidhi Sabha organised in March in Puttur, Karnataka. In the resolution it had drawn the attention of the entire nation to the menace of growing corruption and had called upon the countrymen to join any activity, agitation or movement conducted for curbing corruption. The RSS, through media, had also widely circulated this message. It was no secret. The statement of the Home Minister claiming that it had been decided at the RSS meeting that Baba Ramdev would lead the agitation, not only shows his ignorance and ill-will towards the RSS but also is an attempt to undermine the strength of lakhs of supporters who are lined up behind Baba Ramdev.

The second incident is a little older. The fast unto death organised by noted Gandhian and social activist Shri Anna Hazare at Jantar-Mantar on April 5 for a Jan Lokpal Bill, had also received unprecedented support from different sections of the society. Many organisations, individuals and associations had extended full support to that agitation. Sarkaryavah of RSS Shri Bhaiyaji Joshi had also sent a letter of support to Shri Hazare supporting his initiative for curbing corruption. Shri Hazare had broken his fast after an assurance from the government. But after some time, Shri Hazare publicly said that he felt cheated by the Central Government. He had also warned and cautioned Baba Ramdev publically to be careful while dealing with the UPA government. The media did a commendable job by covering the agitation and educating the people on that issue. Many dignitaries and common people extended their support to Shri Anna Hazare. Some of them could physically reach there and several others supported in silence from their respective places.

The Hindustan Times on June 14 carried an article by self-styled social activist Harsh Mander who is also a member of Sonia Gandhi-led National Advisory Council (NAC). The title of that article was “Why I didn’t go to Jantar Mantar?” Only Harsh Mander knows it better what difference does it make by his going to Jantar Mantar and supporting the agitation of Shri Anna Hazare. And why should he find it necessary to give public clarification for it? I started reading his article curiously expecting a major point of difference in principle with Shri Hazare. But I was disappointed. The three of the four reasons that he cited in his article for his not going to Jantar Mantar included, first, he saw there the influence and presence of people like Baba Ramdev, who had supported Ayodhya movement. The fact is that Baba Ramdev had made his presence at Jantar Mantar on last day i.e. in the afternoon of April 8 only. The second reason that he cited was that RSS leader Ram Madhav was welcomed at the dais there. In fact, it being a people’s movement the dais was open to all. Some RSS leaders including Shri Ram Madhav had gone to Jantar Mantar with the support letter from RSS Sarkaryavah Shri Bhaiyaji Joshi on April 8 i.e. on the fourth and last day of the fast. Who stopped Harsh Mander going there in the first three days? The third reason that he cited was that Shri Anna Hazare praised the developmental initiatives of Gujarat Chief Minister Shri Narendra Modi. This he did only after the fast was over. The question that arises in the mind of even an ordinary person is that all these incidents happened only on last day of the fast. Then what prevented Harsh Mander from going to Jantar Mantar during the initial three days?

May be that the fourth reason (or the first in his article), was the most important reason which prevented him from going to Jantar Mantar. Citing that reason, Harsh Mander writes that the stage was decorated with a picture of Bharatmata, almost identical to that propagated by RSS. Now this seems to be the prime reason which really prevented Harsh Mander from going to Jantar Mantar and which existed there since the first day of the fast. It was the picture of Bharatmata. He, however, did not make it clear in his article whether he accepts or not the concept of Bharatmata, and there will hardly be any worthy son of Bharatmata who does not believe in the concept of Bharatmata. It means that Shri Mander does accept the concept of Bharatmata but because the picture of Bharatmata on the stage had resemblance with the Bharatmata propagated by RSS he could not join the agitation. Can this be a justifiable reason strong enough to keep a patriot away from joining patriotic public movement? This reveals the fascist mentality of such persons which should be condemned in strongest words. I agree that there could have been many reasons for not supporting this agitation. Some may not agree with the leadership of Shri Anna Hazare; some may have apprehensions about the objectives of the movement; some may disagree with the demands raised during the movement or some may have objection to the methods adopted for the agitation. Even, some may have objection to the galaxy of supporters in team of Shri Anna Hazare. Any of these reasons could have been justifiable for not supporting the movement as everybody has freedom of opinion in democracy. But it is beyond one’s comprehension that resemblance of the picture of Bharatmata on the stage with one propagated by RSS can be reason to boycott a people’s agitation. It is an insult to the entire ethos and concept of India as a nation and reveals a fascist mentality.

The third incident is very old. However it came to my knowledge just recently. I was at a place near Hubli in north Karnataka for attending the summer training camp of RSS in the end of April. I came to know about this incident there only. The first Prant Sanghachalak of Karnataka, Shri Appa Saheb Jagajinni, was also a Congress activist. In those days, despite being a Congress activist some people used to be office bearers of Hindu Mahasabha or RSS also. After the Partition, the Congress Government banned the RSS alleging its hand in the unfortunate assassination of Mahatma Gandhi on January 30, 1948. Following baseless propaganda and poisonous campaign on the part of the then Congress government, some people were instigated to attack and vandalise RSS offices and the houses of some RSS swayamsevaks. The then RSS Sarsanghachalak Shri Guruji had officially dissolved the RSS soon after the ban was imposed and he had appealed to all the swayamsevaks to remain unprovoked and not to react, saying “be calm at all costs”. The most violent vandalising attacks were reported from southern parts of Maharashtra i.e. Kolhapur, Sangali and Belgam. The only incident of burning four people alive was reported from this area only. A violent mob of some youth attacked the Belgam Sangh Karyalaya. Since there was no reaction from the swayamsevaks, the outraged attackers had freehand and after breaking the door of the Sangh Karyalaya they started throwing the things outside and started smashing them under their feet. This type of violence continued for some time. There were some pictures of great personalities of Bharat in the Sangh Karyalaya. Those pictures too were met with the same fate stumbling and smashing under feet. One picture among them was of Mahatma Gandhi. The attacking mob in the madness of fury did not even spare the picture of Mahatma Gandhi. Before smashing Gandhiji’s picture the mob had a thought for a moment and then declared that though the Gandhiji’s picture is from RSS office it deserves to be smashed and stumbled upon. This was the reaction of the violent mob outraged by unfortunate assassination of the great worshipper of non-violence. This incident also exposes the same fascist and despicable mentality.

The timings and people associated with above three incidents may be different. But despite being different in nature, the same intolerant and fascist mentality seems exhibited in all these incidents. This is the reason why a non-violent and peaceful public movement becomes worth treating inhumanly if it is supported by the RSS and because the picture of Bharatmata decorating the stage of hunger strike of Shri Anna Hazare resembles with Bharatmata propagated by RSS, the whole public movement becomes worth boycotting and Mahatma Gandhi though is highly revered but his picture if found in a Sangh Karyalaya deserves to be stumbled and smashed under the feet. This intolerant and fascist mentality which was exposed in these three incidents is the real danger for the pluralistic and democratic traditions of India. This dangerous mentality must be identified, exposed and opposed by nationalist forces. The basic tenets of democracy are being violated and strangulated in the name of democracy itself. It is need of the hour to detect, expose and defeat this dangerous mentality.

(The writer is Akhil Bharatiya Prachar Pramukh of RSS)

One thought on “Three different incidents, the same mentality : an article by Dr Manmohan Vaidya”

Tue Jul 26 , 2011
By Ram Madhav, RSS Central Executive Council Member, New Delhi July 26, 2011  Anders Behring Breivik, the mass murderer, believed that there would be a 21st century version of the Knights Templar to save Europe from being run over by Muslims. Knights Templar was an armed Christian movement created in 12th century […] 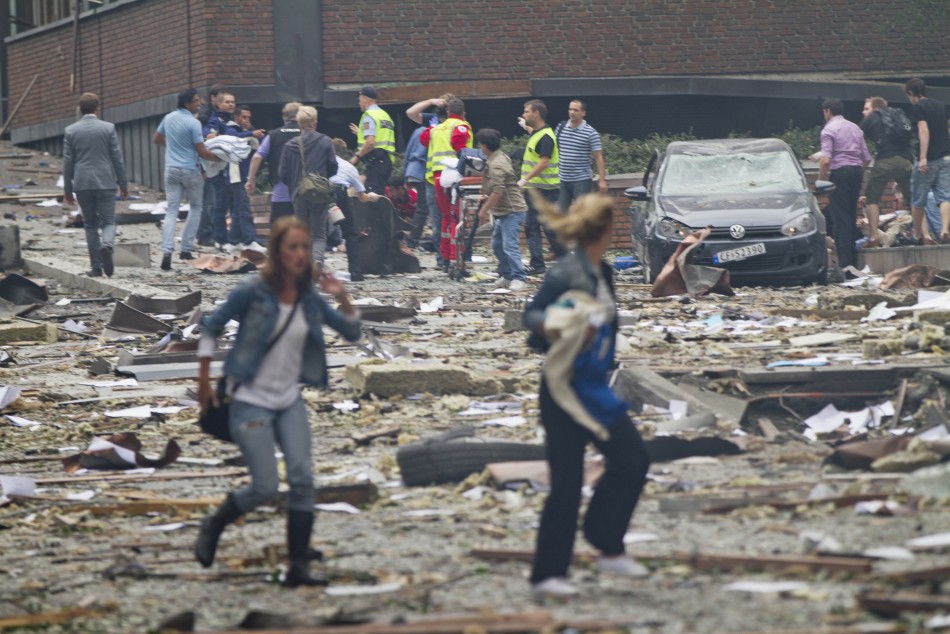