Bangalore: Veteran RSS Pracharak, thinker, writer, Social Worker Dr.Upendra Shenoy passes away on Monday, 9th May 2011 evening at 6.15pm at Bangalore. He was suffering from prolonged illness of kidney.

Dr. Upendra Shenoy had deep knowledge in multiple fields. He was an expert in medicine, education, philosophy and agriculture among other things. He was responding to important issues of current affairs with his scholarly analysis. He had conceived several socially beneficial reforms in education and health. He constantly focussed on sustainable Swadeshi models in several walks of life including education and economy. He contributed towards rural development and Gurukul education.

Born in 1937 at Sringeri of Chikmagalur District, Dr Upendra Shenoy completed in study in Ayurvedic Medical Science at Mysore. He was a practicing physician for some time. He acquired specialization in homoeopathy medicine. He remained unmarried and involved himself in full time social service by becoming RSS Pracharak in 1973.

Dr Upendra Shenoy was one of the founder member of ‘Prajna Pravah’, an intellectual forum of Rashtriya Swayamsevak Sangh at national level. He was Akhil Bharatiya Pramukh of the organization during for several years during its formative period.

He also pioneered the organisations including Krushi Prayog Parivar, an organisation dedicated to promote sustainable agricultural practices and simultaneously making farmers economically independent. He initiated Swadeshi Science Movement at national level, now is transformed to Vijnan Bharati. His thought on rural development gave birth to a new forum Gram Vikas, working towards the betterment of rural life at all levels. He prepared a ground for Child education under a banner of ‘Shishu Shikshan’.

Vyaktitva Vikas Andolan, a movement to promote personality development among common citizens, was one his memorable contribution. He was also one of the founder members of Arogya Bharati, a forum for healthcare at national level. Rashtrothana Research and Communication Centre (RRCC) is a platform initiated by Dr Shenoy, meant for research and intellectual activities at Bangalore’s Rashtrothana Parish at.

From last several decades he was updating and maintaining a database of newspaper clippings in more than 50 categories. He continued his contributions till the very end and through his most recent concept of Arogyamitra (deploying paramedics as an interface between patients and medical professionals of different systems of education) he dreamt of relieving the confusion and suffering among patients.

A Public Condolence meet has been organised on May 20th, FRIDAY at 6pm, to pay final tributes to Dr Upendra Shenoy, at Rashtrotthana Parishat, Chamarajpet Bangalore.

From Nagpur RSS national Headquarters
——————————-
We express our Sranddhanjali to respected Sri Upendra Shenoyji. He was our Senior Pracharak symbol of simplicity  and dedication.
He was original thinker in Reviving Bharateeya values specially in Gram vikas Agriculture and Education.
An voracious Reader thinker and good friend of all.
He was an expert in Homoeopathy in Integral approach in Medical field.
We lost a great personality Guide and Philosopher specially for Karnataka.
With folded hands with tears and bowing my head before that great Soul I pay my sraddhanjali at his feet.
I pray god to give him Sadgati and Courage to all of us to bear this agony.
My pranams to his Fanily members and to all swayamsevaks.
I can understand the feelings and grief of Rashtrotthana karyakartas. I appeal to all those karyakartas to be courageous and i feel Sri Upendrajs Atma will guide us in rebuilding our society on Original Bharateeya values.

(File photos of Dr Upendra Shenoy, at an Intellectual Meet held in 2006 on account of birth centenary of Guruji Golwalkar.) 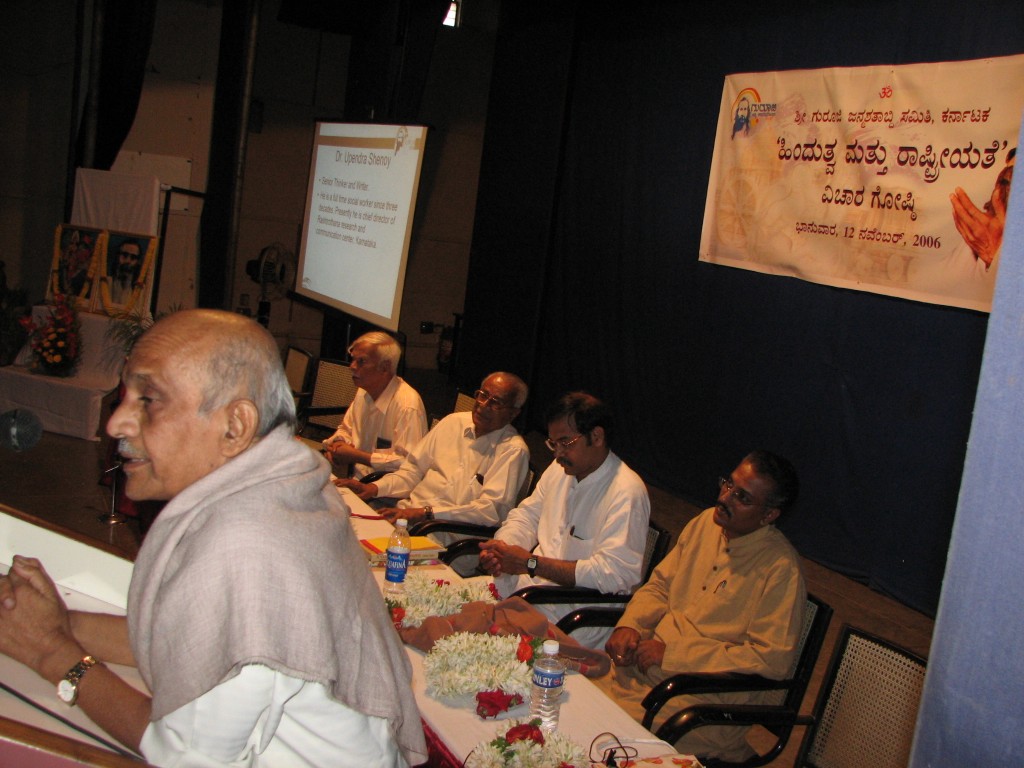