The world’s ever first of its kind, World Samskrit Book Fair held at Bangalore from January 7 to 10, has been huge success in terms  of both- to imbue spirit of Samskrit enthusiasm at all levels and  the number of book sold, along with a massive presence of Samskrit well wishers in this 4day historic event.

Inaugurating the Book Fair and the associated Rashtreya Samkrit Sammelan CM Yeddyurappa said that “ Samskrit is a rich language with a great Heritage. If we lose Samskrit, we are losing nothing other than our culture and tradition. Sanskrit represented the deep-rooted wisdom and knowledge of Indian culture. The Karnataka government supported the language for the last two years and promoted Sanskrit in the majority of universities” He also ensured the support of the State Government in Samkrit related activities. ‘The already established Samskrit University will be strengthened with more facilities’, he added.

For having made Samskrit as Second official language of Uttarakhand, Ramesh Pokhriyal, the Chief Minister of Uttarakhand was honoured during the occasion. Speaking at the event Pokhriyal remineded the great heritage as well as the contributions of Samskrit to the ancient world which still has not lost its relevance yet. We should be proud of our ancient Samskrit contributions, let’s spread awareness around the world about the same, he told. Even he also pointed out that 2 cities in Uttarakhand are to be declare as ‘Samskrit Cities’, where even a lay man can communicate each other through Samskrit.

Former Chief Justice of India Justice MN Venkatachalaiah presided over the inaugural event. He told that “Dr. B R Ambedkar’s perspective of  Samskrit being the national language was reported in 1947. August 11th issue of an National media. Unfortunately the great language could not have that place after India became republic for some other causes. Samskirt teachers should get good remuneration so that Samskrit education provides not only life but also living.”

Anil Kumble, former Indian cricket captain inaugurated the Jnanaganga — an exhibition showcasing the knowledge heritage of India by, with the lighting of the ceremonial lamp. Samskruta Gramaha, a model of the working Sanskrit village was inaugurated with the ringing of a bell by Vishwshwara Hegade Kageri, Education Minister of Karnataka.  Kumble in his address to the gathering mentioned that he is an ardent lover of Sanskrit. ‘Sanskrit is the foundation of all languages. It was indeed heartwarming and an eye-opener to visit this fair. What Sanskrit has donated to our world is astonishing. I am honoured and humbled to be a part of this cause. It’s like comparing T20 and normal cricket. Sanskrit is the foundation of all languages. I hope to speak in Sanskrit someday’ said Kumble.

In the valedictory event, Dinesh Kamath, The national organising secretary of Samskrit Bharati expressed deep concerns about prompting further awareness in the society about Samskrit learning and speaking. ‘Once Samskrit was considered to be one in the list of dead languages. Now in Samskrit is no more a dead language, it came up with efforts of many to a considerable level it is an endangered language. From sports to arts and news to debates, Samskrit has a presence. For countable population of Urdu, If a  Urdu TV Channel is possible, why can’t there be a Samskrit channel for a large population? ‘Samkritam Sarvathram’ Samskrit everywhere is my wish’ said Dinesh Kamath.

–          According to the publishers who have experience of several book fairs since decades, in this World Samskrit Book Fair visitors were much specific about their choice and interest.

–          People from all social spectrums, from religious leaders to Ministers, corporate employers to farmers, students-teachers, and people from all caste, language, religion participated with much Samskrit enthusiasm.

–          The exhibition which reflects and explains the knowledge heritage of India, was one of the key attraction, was well appreciated by the public. National Manuscript Mission is also showcased ancient literary texts and languages. Organizations like ISRO, CDAC and others reputed institutes also joined their hands in this mega event to present India’s strides in the areas of mathematics, astronomy, metallurgy, avionics and others. Several ancient implements were displayed. Information cascade on ancient languages, scripts etc via journals, books, charts, presentations, etc were being organized.

–          Each day thousands of School students visited the exhibition and were curious about the concepts explained in Astronomy. Astrology.  Vedic mathematics, botany, zoology, agricultural science, planetarium, formation of soldiers in different patterns as explained in epics like padmavyooha etc.

–          Vice- Chancellors from 14 Samskrit Universities were participating in the Fair. In Samskrita Kavi Goshti, Poets from parts of the world presented their own work through recitals.

–          The cultural programmes in Samskrit held at Conference Hall and Kuvempu Kalakshethra was witnessed by thousands Samskrit well wishers.

–          It was observed that visitors were more interested in understanding concepts in Science tradition of India and pride of India book series.

–          The samskrit Village show, which symbolizes a livelihood at village based on Samskrit major lifestyle, influenced the Urban Population of Bangalore. From vegetables to eatables Hats to STD booth, all aspects of social life were communicated and explained in Samskrit.

–          Demonstration of A traditional village judiciary system in Samskrit was new to many, attracted many.

–          The controversial novel ‘Lajja’ in Bengali that led to the exile of Bangladeshi writer Taslima Nasreen will be translated into Sanskrit, too. Samskruta Bharati has taken the onus of translating the book under Saraswati Seva project, which has reproduced many books from regional languages in Sanskrit. The organisation, dedicated to promote Sanskrit, has decided to translate at least 1000 books in the next five years.

–          More than 8000 delegates from 24 states of India were participated during the national conference held as a part of World Samskrit Book Fair.

–          The cultural programmes in Samskrit held at Conference Hall and Kuvempu Kalakshethra was witnessed by thousands Samskrit well wishers.

–          A foreign guest at the venue, Michael Williams, was from Manchester of UK, was a student at Oxford University, Sanskrit is like his native language, words roll off his tongue effortlessly. He speaks fluent Sanskrit. Michael prefers to email in Sanskrit, whenever he wants to communicate with his teachers and friends. “I use the Devanagari script. But we do not have a system yet, where email IDs can be written in Sanskrit,” he says.

–          THE ENTIRE PROGRAMME WAS FIRST OF ITS KIND IN SAMSKRIT IN WORLD, BY ALL MEANS, WAS A SUCCESSFUL EVENT. 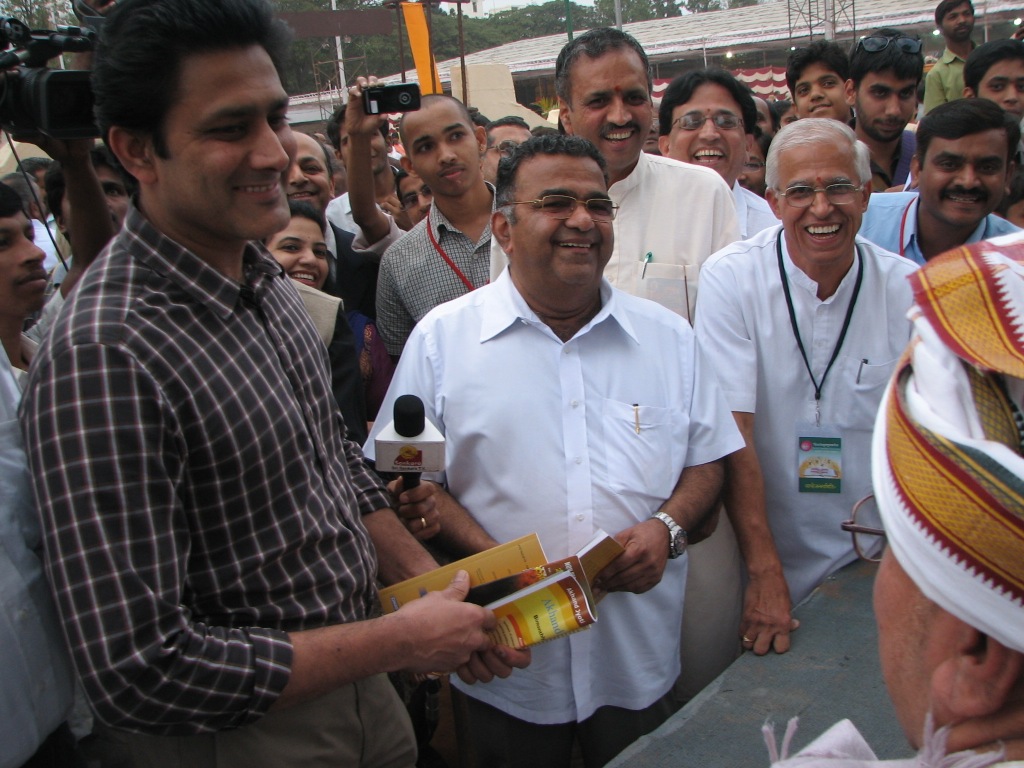