He expressed his anguish that some political parties are branding Hindu Organisations as terrorist organisations just to achieve their political means, which is a dangerous trend. He opined “If Hindus really want to become terrorists, who will survive then ?”.

“The height of corruption the country is facing” he said: “is dragging the common man also into it knowingly or unknowingly”. Corruption is rampant at the political leaders’ level, Minister level and at the judiciary level which is alarming. This could be attributed to wrong government policies, the general environment with which we live in, and the lack of value based education.

On the other hand there is an imminent threat to National Security due to China’s expansionist tendency. China is always a “Samrajya vadi”. Its symbol is a dragon which we must be aware, he said. It always wants to expand influencing smaller states and in turn increase its grip. Keeping this in mind the meet discussed the urgent need to strengthen the North-Eastern border as well as installing a strong communication network and transport system.

This apart, we also see several positive things happening in this country. Citing specific examples he said: there is a huge awareness among the Hindus regarding the issues plaguing the country. They are slowly taking to their cultural roots and that was evident in the huge Sanskrit Book Fare at Bangalore recently, where 4 – 5 lakh ordinary people visited the fair and bought books. Now, other states are also interested in arranging such fairs for the benefit of common man.

There is also a trend of Kumbha Melas happening at various parts of the country with the theme of Social Harmony which was earlier happening for Dharmic purposes and it is a welcome sign. The Shabari Kumba at Gujarat was one such which awakened their Dharmic responsibilities through Social Harmony. We even celebrate the birthday of rivers. One such was the Narmada Kumba at Madhya Pradesh which was attended by 30 lakh Hindus and a good example for Social Harmony.

Sangh work is always positive in spite of governments suppressing it. There could be some temporary setback here and there, but Sangh is surging forward with its positive work and that is what statistics says he said.  Be it Gram Vikas Yojana at a Universal level, Vishwa Go Gram yojana – protecting the indigenous cows, and the training camps and workshops from the micro to macro level through out the country.

Replying to a query he said: BJP is not a sister organisation of the Sangh and RSS has no wings. But they too carry the same ideology and during their difficult times they take brotherly advice. We always insist that every body work towards achieving the ideological goal.

Answering another question about successor to the highest post, he said, the some office bearers of RSS are elected through democratic process.

Regarding the specific topics chosen at the meet when there are so many issues troubling the country, he said, those topics which concerns the common man most and threat to national security were chosen for discussion. And he concluded saying: Corruption could be defeated with an action plan of mass mobilisation and awareness programme in a democratic way as well as cooperation with already existing movements which addresses these issues. 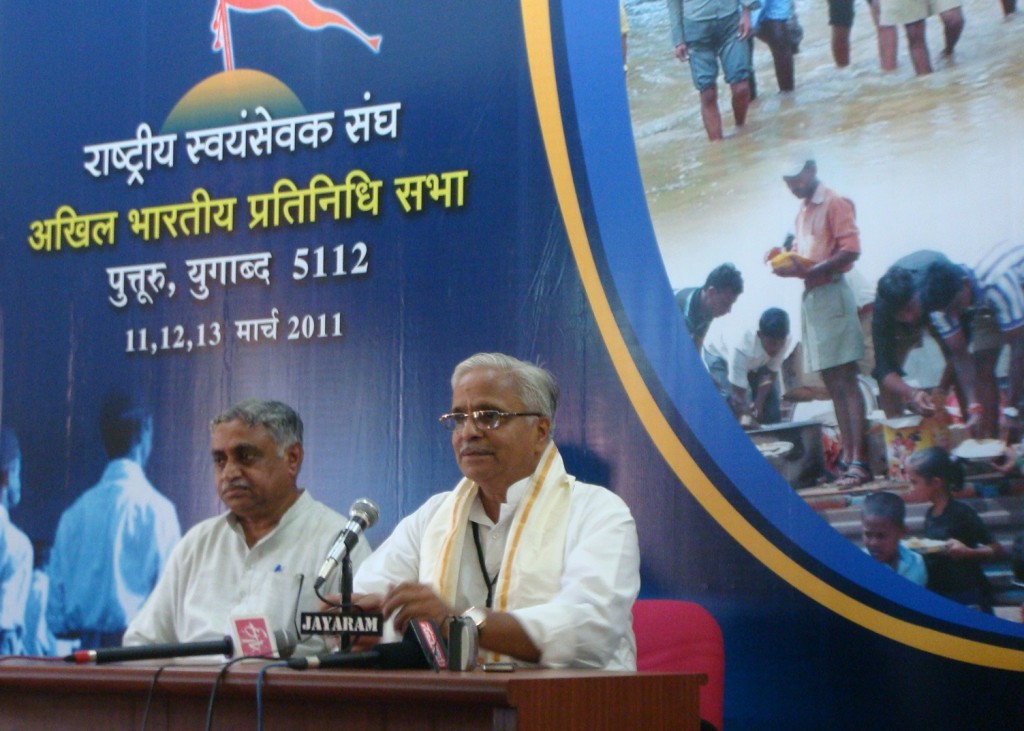