1. New rule give some relief to nuclear suppliers :

New Delhi : The government has finalised rules for the implementation of the country’s new nuclear liability that aim to meet the concern of American nuclear suppliers wary of being exposed to unlimited liability in the event of a Fukushimatype accident involving any of their reactors. [The Hindu p1]

2. East Asia meet to have China tilt : NEW DELHI: China will be the

primary political and military establishment in Asia -that is scheduled to

Agni-V To Be Tested By February: New Delhi: The countdown has

begun. Within three months, India will gatecrash the super-exclusive ICBM

like the US, Russia and China that brandish long-range strategic missiles

Targeting China, Others: New Delhi: Investigators have unearthed a

new and deadly pattern of cyber attacks in which Indian government

servers have been used by foreign entities to target the computer

Information Commission has directed RBI to reveal names and details of

banks. The CIC rejected RBI’s argument that it held the information in

fiduciary capacity, and disclosing it would hurt India’s economic

a bid to prevent educational institutions from demanding capitation fee for

admission, the government wants to double the proposed penalty to Rs. 1

NEW DELHI: The government is finally going ahead with the 26% foreign

direct investment in pension funds and setting up of a regulator for them.

resistance from the Left -was taken by the cabinet on Wednesday.[HT p1]

lokpal bill during the winter session of parliament beginning on November

9. Petrol Prices to be Revised Every 15 Days, Move to align rates with

international levels, as they prepare to replace the opaque pricing

mechanism with a transparent and predictable system, top executives

: NEW DELHI : The decision to slash petrol price has once again

demonstrated the lack of elbow room for the Manmohan Singh

state elections round the corner, the government will have to be more

attentive to the political and electoral needs of Congress. [ET p2]

11. US sacks 2 for frisking Kalam inside aircraft : NEW DELHI:US

authorities have sacked two officials of their transport security agency for

12. CAG will go ahead with controversial audits: Rai : New Delhi:

complaint that he had overstepped its brief, Comptroller and Auditor

audits of controversial decisions when he told members of the joint

parliamentary committee (JPC) about the ongoing audit of the Ultra Mega

Finance minister Pranab Mukherjee complimented the role of the

Comptroller and Auditor General (CAG) in setting up checks and balances

Wednesday debunked charges that he had attempted to influence the

Comptroller and Auditor General (CAG) on the 2G spectrum report and

insisted that he never overstepped his brief. [ET p3]

strengthened its argument that the politically incendiary audit report was

crore for highway construction. Among these, four are in Uttar Pradesh

alone, including one from Lucknow to Congress president Sonia Gandhi’s

Meira Kumar has convened an all party meeting on Thursday. After large

sailing of the upcoming session.[HT p8]

Maoists were more dangerous than any terrorist outfits and held them

responsible for the Gyaneswari Express mishap which took place last

bribe, the Delhi high court on Wednesday granted them bail in the cashfor-

21. Army must have say in AFSPA row : Advani : Jammu : Pointing out

that the Army was being demonised in J-K, senior Bharatiya Janata Party

(AFSPA) without consulting the troops.[IE p8]

22. Yatra not an attempt to repackage myself, says Advani : Chandigarh

for that matter.[The Hindu p5]

23. Aruna Roy Not Happy with Redressal Bill : NEW DELHI : A section of

and activist Nikhil Dey, has said that the government’s proposed

Council Chief Urges SC And Bombay HC To ‘Reconsider’ Their

Wednesday urged the Supreme Court and the Bombay High Court to

New Delhi :Prosecution witness and Group president of the Reliance

recorded his statement in March.[IE p3]

CBI of falsely implicating him in the Sohrabuddin Sheikh fake encounter

case in a bid to destabilize the Narendra Modi government.[IE p6]

Karnataka HC on Wednesday granted a conditional anticipatory bail to

him in two cases of alleged illegal denotification of government land.[HT

expressed resentment against their humiliation by the local

: Despite virtually clearing all legal hurdles for his return to active politics,

Lokayukta Justice N Santosh Hegde on Wednesday lashed out at

politicians who questioned the relevance of the Lokayukta. “BJP

(Bharatiya Janata Party) leaders are campaigning against the Lokayukta

to weaken the impact of the illegal mining report,“ Hedge told media

Sankaranarayanan has referred back the Goa Lokayukta Bill, 2011 to the

32. Not a poll gimmick, says Mayawati : Lucknow : A day after her Cabinet

Mayawati sought on Wednesday to dispel the criticism that the decision

was made with an eye on the Assembly elections.[The Hindu p1]

Congress is treading cautiously to avoid upsetting its negotiations with

resolution for division of state: NEW DELHI : Faced with Mayawati’s

wriggle out of the politically untenable situation. [ET p2]

35. BJP ropes in Vajpayee for Atal Charishma in UP : Azamgarh : Former

Prime Minister Atal Bihari Vajpayee is back in BJP’s campaign. the party

has clearly fallen back on its tallest Brahmin leader, Vajpayee, to take the

LUCKNOW : The UP Police has registered criminal cases against Union

37. Maya hits back : Centre wants to stall UP division :Lucknow :

Rejecting the Congress suggestion for setting up a states reorganisation

Cabinet on Wednesday approved a national panel’s recommendation for

amending the Central list of OBCs, paving the way for inclusion of more

than four dozen more castes in about 20 states and Union Territories.[IE

what could perhaps be his last chief ministerial bid, Mulayam Singh Yadav

sought a farewell gift from his supporters: A clear majority for the

Samajwadi Party in the coming UP polls. [TOI p12]

by UP chief minister Mayawati’s proposal to divide the state into four, the

BJP has decided to move a no-confidence motion against the

government. The BJP move may help it deflect attention from its studied

silence after Mayawati announced her plan on Tuesday. The party is yet

proposal in the assembly.[HT p9]

41. Gehlot Takes Care of Caste And Community Equations While

has inducted six ministers, dropped five and promoted minister of state for

the Congress-led Delhi government for handing out provisional

regularisation certificates to unauthorized colonies, the BJP has alleged

The process of trifurcation of the Municipal Corporation of Delhi has

property will soon become a costly affair, with the Delhi government

Action: New Delhi: A lawyer, who allegedly got his client to sign a will

the influence of liquor, found himself in the dock for alleged fraud. The

in the dark, dingy cells. Free for now, the seven were greeted with hugs,

tears, smiles and sweets, as the wait finally ended for the them as well as

47. All teams have fixed games: Ex-ICC cop : London: The former chief of

fixing at some point or the other. [TOI p1]

48. US does not fear China, says Obama, US Widens Military Ties With

Wednesday that the United States does not fear China, even as he

announced a new security agreement with Australia that is widely viewed

as a response to Beijing’s growing aggressiveness. [TOI p20]

Thu Nov 17 , 2011
‘Face criticism, ignore praises to achieve task of Param Vaibhav’ Indore : “Social activists who have chosen a tedious path of social service, should not turn around in midway, that is the rule of the game”, said Sarsanghchalak (RSS chief) Dr. Mohan Bhagwat while inaugurating a teachers training camp related to […] 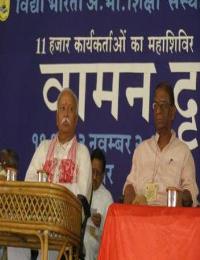