1. Back off on South Sea: PM to China, ‘Indian Interests Commercial

And Legitimate’: Bali: India firmly rejected China’s objections to its

commercial” and sovereignty claims must be settled according to

China it would continue its oil and gas exploration in the South China Sea,

3. ‘US firms must work within our N-liability law’ : Bali: Prime Minister

on civil liability for nuclear damage, indicating the law cannot be tweaked

4. Decide if you want to stay in alliance, Didi tells Cong, ‘We Don’t Need

Parties Having Covert Relations With CPM’: Kolkata: “Decide whether

:Less than two weeks after the West Bengal chief minister’s standoff with

the UPA government over the hike in petrol prices was sorted out, cracks

in the Congress Trinamool alliance have started to show again.[HT p12]

:Responding promptly to interlocutors’ request to relieve them of their

Mamata Banerjee has called for a meeting with them on Saturday. The

six-member team of interlocutors on Thursday, in a letter to the CM, had

expressed their desire to be relieved of their responsibilities.[IE p2]

intelligence agencies have come across credible information that Maoist

Mamata Banerjee. But she is not the only one: there are at least eight

on Friday cleared infrastructure projects worth more than Rs 25,500 crore.

It sent clear instructions to various departments to clear all procedural

hurdles for these projects, covering the highways, urban metro and power

after the then telecom minister Sukhram misused his official position to

telecom firm after receiving bribe of Rs 3 lakh, a special CBI court has

convicted him in the telecom scam. [TOI p13]

10. Centre, J&K to prepare new draft of AFSPA : Jammu : The Centre has

leader L.K.Advani’s former aide Sudheendra Kulkarni, who along with

party’s two former MPs got bail in the cash-for-vote scam, is likely to join

Mr Advani during the last leg of his Janchetna yatra. Sources disclosed Mr

Manmohan Singh and UPA chairperson Sonia Gandhi should apologise to

the nation for the ‘political conspiracy’ under which BJP whistle-blowers

13. Leak of Lokpal Bill tapes has govt worried : New Delhi: The tapes of

proceedings of the parliamentary committee discussing Lokpal Bill have

reportedly found their way out into the public domain, triggering sharp

concern in the government. [TOI p18]

14. ‘People came on streets for Lokpal, not Jokepal’ : New Delhi: There

appears to be very little ground for reconciliation between the government

wing be brought under the purview of Lokpal. [TOI p18]

national sports development bill even though the both groups had

‘unverified’ data being collected by the Unique Identification Authority of

minister P Chidambaram has expressed concern over such an exercise

creation of false profile in the project which may compromise internal

scam from Tihar jail, the BJP on Friday announced that they will be

years from the organisation on charges of anti-party activities, the

Bharatiya Janata Party on Friday disqualified from membership of the

Legislative Assembly six other legislators who along with him had crossvoted

in favour of the ruling National Conference and Congress nominees

during the Legislative Council polls in April this year.[IE p2]

on Friday said it favoured constitution of the second States Reorganisation

Commission (SRC) to address similar demands from other parts of the

:Overwhelmed by the support received by the crowd in Rishikul ground

during his 60-year-long political career, is much more than the power he

would have enjoyed as the Prime Minister of the country.[Pioneer Daily

22. A room for Ms Bharti, and two campaigns : Lucknow : A day after BJP

at the state party headquarters here to set up an office for Uma Bharti,

the room. Her nameplate was also put on the entrance door of the

23. Congress close to deal with Ajit for western UP : NEW DELHI:Hard

ahead of the crucial Uttar Pradesh Assembly elections, as leaders of the

DELHI:Wary of the possibility of Chaudhary Ajit Singh drifting to the BJP,

Ahead of the Uttar Pradesh polls, the government is set to announce a

package for handloom sector in a bid to boost credit availability, subsidize

evoked absolutely no interest in the four regions.[AA p2]

27. Opp banks on BSP rebels to upset Maya applecart : Lucknow : At the

fag end of the BSP Government’s tenure, the Opposition is all set to

motion against her Government, and is pinning its hopes on ruling party’s

28. BJP to support JMM in Mandu bypoll : Ranchi : It’s going to be a toolittle-

too-late story. The State BJP on Friday announced its decision to

It leaves a bad taste in the mouth of JD(U) candidate Khiru Mahto, who

had lobbied for electoral support from its NDA ally.[Pioneer Daily p4]

29. Bhatta-Parsaul: FIR against 30 cops for rape : Noida: In another

setback to the UP police, a city court on Friday ordered registration of FIR

agitation there in May this year, as well as for refusing to register a

30. SC clarifies : SPO ruling only for Chhattisgarh : New Delhi : The

Naxal special police officers (SPOs) would apply only to Chhattisgarh, and

not other parts of the country.[IE p1]

Delhi : Councillors and party workers of Delhi BJP are preparing a grand

welcome for veteran leader L K Advani, who will be concluding his Jan

Chetna Yatra at Ramlila Maidan on Sunday. With the Municipal

Corporation of Delhi (MCD) going to polls next year, MLAs and party

workers are going all out to put up a show.[IE p5]

Capital, the party’s municipal councillors are caught up in preparations for

his reception at Ramlila Maidan on Sunday, leaving the MCD’s affairs in

Register its protest against the trifurcation of the Municipal Corporation of

plans to raise Rs 2,000 crore to stay afloat. Of this, the airline requires

through guarantees and approximately Rs 1,000 crore through a

combination of fund infusion by promoters and a rights issue. [TOI p27]

MUMBAI: If you have travel plans for December, be prepared to shell out

more for your air tickets. Hoping to make the most of the holiday rush,

37. Azhar, others slam Kambli’s fixing claim, ‘Why Was He Silent For 15

semifinal was a result of match-fixing, his former teammates ridiculed the

ready to create a “new security team” favourable to Americans and

promised the US to hand over Pakistan-based 26/ 11 perpetrators

including those from its intelligence agency to India. [TOI p1]

:Pakistan’s civilian government is said to have offered to act against the

Indian security services in an assurance given to the United States.[The

Sun Nov 20 , 2011
NEW DELHI Senior Bharatiya Janata Party (BJP) leader LK Advani on Sunday concluded his 38-day Jan Chetna Yatra — to draw public attention to the issues of black money andcorruption — with a public rally at the Ramlila Maidan in the capital. While addressing a rally at Ramlila Maidan Advani said his yatra was a […] 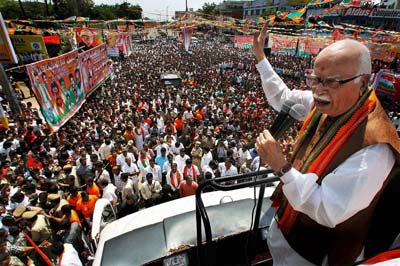