Thirty seven years ago this week, the Constitution was brutalised to turn India into a police state. One of the men who helped enforce Mrs Gandhi’s dictatorship is set to become the keeper of the Constitution

News would travel fast in Jamshedpur, a small sleepy town in the 1970s where there were few distractions from the daily routine. This was some three decades before the advent of the Internet and cell phones. Computers were unheard of and television notionally existed, courtesy Doordarshan, in the big metropolitan cities. Few homes had telephones and still fewer had telephones that were not perpetually ‘out of order’.

In Jamshedpur, life was played out, frame by frame, in monotonous black and white, with occasional stretches of technicolour excitement. Jump cuts were considered too startling, but they couldn’t be avoided entirely: These usually came by way of unsettling news from the world beyond Jamshedpur, either borne by the Calcutta papers that came by the morning train and were distributed late in the afternoon, or riding the radio waves of Akashvani. People tuned into All India Radio to listen to Lotika Ratnam and Nilima Sanyal, not so much for what they had to say but to hear their voice so that they could imitate their accent. But that was okay, because, as I said, news travelled fast in Jamshedpur.

And so it was that although the Calcutta papers did not arrive on June 26, 1975, everybody knew by mid-morning of the events with cataclysmic consequences of the previous evening in faraway New Delhi. Prime Minister Indira Gandhi had ‘recommended’ to President Fakhruddin Ali Ahmed the declaration of Internal Emergency as she had information that there was “an imminent danger to the security of India being threatened by internal disturbances”. The President had complied without a murmur of protest.

At the stroke of the midnight hour, civil liberties and fundamental rights had been suspended; censorship imposed; Opposition leaders arrested; and, dictatorship of the dynasty had replaced democracy of the people. India was in chains all over again, this time enslaved by its own. “Don’t talk to strangers,” parents instructed their teenaged children.

Over the next few days a strange fear descended upon the people of this country — the fear of being punished and persecuted by the Emergency regime through its many agents and agencies. The dreaded midnight knock became the metaphor of those dark, terrible days when friends stopped trusting friends, relatives shunned relatives, teachers squealed on students and vice versa, and censors eager to please Congress bosses decided what was fit to print.

Not everybody, though, was appalled by Mrs Gandhi’s tanashahi — I learned that word from our physics teacher who was a tyrant in the classroom but would incessantly rage against the tyranny of what he would bitingly describe as an “illegitimate Government”. There were middle-class collaborators who, convinced that imitation was the best form of flattery, mimicked Sanjay Gandhi’s mannerisms and style of speech, and wore white kurta-pajamas similar to his. Hoodlums wore white kurtas over drainpipe pants and ran extortion rackets. Many people thought the Emergency was a good idea because trains ran on time and Vinoba Bhave endorsed Mrs Gandhi’s evil decision, calling the Emergency“Anushasan Parv”. Newspapers, barring honourable exceptions, caved in without a fight: Journalists, asked to bend, chose to crawl.

Meanwhile, dissent and its expression through protest was met with swift retribution. The RSS, which mobilised its vast network of swayamsevaks to launch an underground movement against Mrs Gandhi’s dictatorship, was banned. But that did not deter swayamsevaks from persisting with their movement that was described by The Economist as “the only non-left revolutionary force in the world … its platform at the moment has only one plank: To bring democracy back to India.” The only other organisation which led from the front in the fight-back was the Akali Dal. Mrs Gandhi tried to coopt the Akalis, but they rebuffed her gesture; for them, freedom was far more important than power.

The Intelligence Bureau and the Central Bureau of Investigation were used for intimidating and harassing both rich and poor on mere suspicion of anti-Emergency activism. The Income Tax Department was instructed to let loose a reign of terror on trade union leaders. People were arrested and packed off to jail; many of them were brutally tortured to extract a confession that would serve the Emergency regime’s political interests — for instance, that he/she was a CIA agent.

The Constitution was slyly amended to declare India a Sovereign Socialist Secular Democratic Republic, an absurdity whose burden we are still forced to carry. To inspire confidence in the Supreme Leader, a massive Soviet-style propaganda offensive was launched. Billboards were put up with slogans like “The Leader is right, the nation’s future is bright!”In offices, including those in the private sector, Congress goons put up posters, urging people to “Work more, Talk less.” It was all very darkly reminiscent of the Third Reich.

Mrs Gandhi had the Supreme Court packed with handpicked ‘committed’ judges whose job it was to overturn the Allahabad High Court’s judgement of June 15, declaring her 1971 election as void and disqualifying her from contesting elections for the next six years. To demonstrate their ‘commitment’ to her, the judges also suspended the provision for habeas corpus without which India is no different from a police state ruled by a tin pot dictator.

By the time Mrs Gandhi called a general election in the spring of 1977, the people had made up their minds. On voting day they voted out the Congress! Mrs Gandhi and her son Sanjay were trounced in constituencies they considered to be their family heirloom and, therefore, theirs by right. A chastened Mrs Gandhi lifted the Emergency on March 21, 1977.

Thirty-seven years later, the excesses of the Emergency era may appear too distant in the past to be worthy of recall. But to believe that would be incorrect. There has been no change in the attitude of the Congress and the party’s first family makes no effort to hide its unshakeable belief that it has the divine right to rule India, either directly or indirectly, and not be held accountable for the many sins of omission and commission of which the Nehru-Gandhis are guilty. Indeed, to forget the Emergency would be a grave injustice to those who suffered so that liberty and rights would be ours.

It will forever be a matter of abiding shame for Bengalis that one of their own — Chief Minister Siddhartha Shankar Ray — came up with the idea of using the Constitution to kill freedom in India and drafted the declaration of Emergency to which Fakhruddin Ali Ahmed meekly appended his signature.

Those who are not well-disposed towards Mr Pranab Mukherjee would add the name of a second Bengali to the list of the villains of 1975-77 — his. As Minister for Finance in those dark days he did Mrs Gandhi’s bidding and more than helped keep dissenters at bay through the expedient means of getting the Income Tax Department to ruthlessly hound them. Seen in this context, it’s only apt that he should resign from the Cabinet close to June 26, the 37th anniversary of Mrs Gandhi’s Emergency, to assume the charge of ‘Keeper of the Constitution of India’ as President of the Republic.

The writer is a senior journalist based in Delhi

Mon Jun 25 , 2012
New Delhi: Rashtra Sevika Samiti has organised 35 training camps this year across the country. About 5,000 activists are being imparted training in these camps.  A similar training camp of four Prants (Kashi, Awadh, Goraksh and Kanpur) was organised in Kanpur from May 27 to June 14. A total of […] 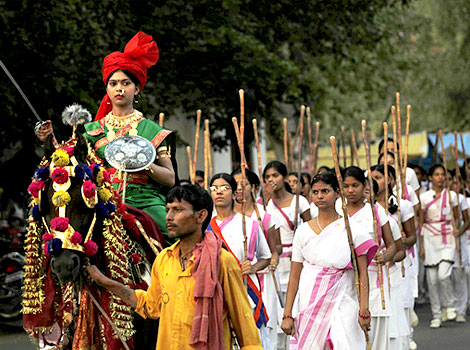