m/2012/04/rajaram.png?w=76&h=96&h=119″ alt=”N.S. Rajaram” width=”76″ height=”119″ />Here is the substance of the St. Thomas story: First, if he existed he was a twin brother of Jesus which is unacceptable because Jesus was the Only Son of God. Next, he could not have preached Christianity in 52 AD because Christianity and the New Testament came into existence only in the fourth century, after the Council of Nicaea called by Roman Emperor Constantine in 325 AD. The first Christians came to India with the Syrian merchant Thomas in 345 AD escaping persecution in Persia. Lastly, the Namboothari Brahmins settled in Kerala only after the fourth century AD, so could not have been converted by Apostle Thomas in 52 AD using the Bible from three centuries later. – Dr. N.S. Rajaram

According to Christian leaders in India, the Apostle Thomas came to India in 52 A.D., founded the Syrian Christian Church, and was killed by the fanatical Brahmins in 72 A.D. His followers built the St. Thomas Church near the site of his martyrdom. Historians however say this apostle, even if he existed, never came to India. The Christian community in South India was founded by a Syrian (or Armenian) merchant Thomas Cananeus in 345 AD. He led four hundred refugees who fled persecution in Persia and were given asylum by the Hindu authorities.

This story was too commonplace to attract converts. So Christian leaders identified the merchant Thomas with Apostle Thomas and created the dramatic story of the Apostle’s persecution and death at the hands of the “wicked”Brahmins of South India. This became current in the 16th century when thePortuguese gained control of the west coast of India and forced the Syrian Christians to follow the Catholic faith. The Portuguese also destroyed theKapaleeswara Temple that originally stood on the site now occupied by the San Thome Cathedral on the beach.

The creation of this myth and the history is told in detail by the Canadian scholarIshwar Sharan in his famous book The Myth of St. Thomas and the Mylapore Shiva Temple. The purpose of the myth was to create a local martyr. Christianity depends heavily on the appeal of martyrs who are projected as victims like Jesus Christ. Then as now, Church leaders liked to pose as victims to generate sympathy and propaganda. But no matter how much they tried, the Hindus of India refused to supply the Portuguese with martyrs. So they were forced to create their own. So they turned the merchant Thomas into the Apostle Thomas killed by the Hindus.

In his foreword to Ishwar Sharan’s book, the Belgian scholar Koenraad Elst wrote: “In Catholic universities in Europe, the myth of the apostle Thomas going to India is no longer taught as history, but in India it is still considered useful. Even many vocal ‘secularists’ who attack the Hindus for relying on myth in the Ayodhya affair, off-hand profess their belief in the Thomas myth. The important point is that Thomas can be upheld as a martyr and the Brahmins decried as fanatics.”

Targeting Brahmins to undermine Hinduism was a favorite tactic among missionaries. Elst gives the true picture: “In reality, the missionaries were very disgruntled that the damned Hindus refused to give themmartyrs (whose blood is welcomed as ‘the seed of the faith’), so they had to invent one. Moreover, the church which they claim commemorates St. Thomas’ martyrdom at the hands of Hindu fanaticism, is in fact a monument of Hindu martyrdom at the hands of Christian fanaticism. It is a forcible replacement of two important Hindu temples (Jain and Shaiva) whose existence was insupportable to the Christian missionaries.”

Another motivation for the myth was to erase the unsavory record of the Catholic Church’s close association with thePortuguese pirates and even worse, the Goa Inquisition inspired by St. Xavier. But serious scholars including Christians have rejected this myth as we shall soon see.

Who was this Apostle Thomas and why was his name invoked? The main sources relating to Apostle Thomas are two Gnostic (non-Biblical) texts known as the Acts of Thomas and the Gospel of Thomas. According to them Thomas was the twin brother of Jesus. For this reason the Thomas myth is not accepted by the Vatican because of a doctrinal problem: Jesus as the Only Son of God cannot possibly have a twin brother. (Greek for Thomas is Didymus, which means twin brother.)

Christians in South India who identify themselves as St. Thomas Christians claim that their ancestors were blessed by Apostle Thomas in 52 A.D. who preached from the Bible. This has no historical basis as we shall see. In fact, there is no evidence that Thomas even existed. His “history” is full of contradictions as will become apparent.

As just observed the Portuguese missionaries who came to India in the 16th century found that they could not do without a local martyr and created the myth of St. Thomas claiming that he was martyred in India. They gave no explanation as to how they discovered it more than 1500 years later. Marco Polo is supposed to have mentioned it but there is no authenticmanuscript that can be attributed to him. Then there is the question of how he discovered it more than a thousand years later.

There is even a tomb that is supposed to contain his martyred remains in Mylaporein Chennai. But the problem is there are several such memorials spread across Persia, Acre (Israel) and a few other places dating to different times, all laying claim to be the place where Apostle Thomas was martyred and buried!

After examining all the evidence, the late Father Heras, former Director of theHistorical Research Institute, St. Xavier’s College, Bombay, said in 1953 that he was convinced that the tomb of St. Thomas was not in Mylapore. He had earlier said, quite emphatically in The Aravidu Dynasty of Vijayanagara, that the Portuguese account of their discovery of some relics was “a most barefaced imposture [with] all elements of a forgery.” Heras was himself a Jesuit father but also an eminent historian.

This is not the end of the story, for while denying the myth because it challenges Jesus as the “Only Son of God” the Vatican wants to have it both ways. On September 27, 2006, Pope Benedict XVI gave a speechat St. Peter’s in Rome in which he recalled an ancient tradition claiming that Thomas first evangelized Syria and Persia, then went on to Western India, from where Christianity also reached Southern India. Syrian Christians derive status within the caste system from the tradition that they are converted Namboothiris (Brahmins), who were allegedly evangelized by St. Thomas after he allegedly landed in Kerala in AD 52.

There are serious problems with this theory: the Namboothiris started settling in Kerala only from the fourth century onwards, which means they did not exist at the time the alleged St. Thomas allegedly came to Kerala. So we have a possibly non-existent apostle preaching in the first century from a text, the New Testament, dating to the fourth century, to a people, the Namboothiris who settled in the fourth century or later. In reality the Pope’s original statement at St. Peter’s, reflected the geography of the Acts of Thomas, i.e. Syria, Parthia (Persia / Iran) and Gandhara (Afghanistan / Northwest Pakistan) — all far removed from Kerala in the southernmost tip of India.

This is not the end to the contradictions. If Thomas landed in Kerala in 52 AD, he could not have taught from the Christian Bible(New Testament) with its four gospelswhich came into existence only in the fourth century. In fact Christianity did not exist at the time because there was no Christian scripture! In addition, the famousSt. Thomas Cross supposedly brought by him made its appearance in Kerala only in the fourth century, about the same time as the Namboothiri Brahmins. So it is quite possible that the highly ornate St. Thomas Cross [with Hindu motifs carved in it] was borrowed from the Namboothiris, having nothing to do with St. Thomas or even Christians. The Church borrowed its cross from the Egyptians and the oldest so-called St. Thomas Cross is a pagan Persian symbol.

As if this were not confusing enough, FatherFrancis Clooney, a theologian with the Harvard Divinity School has stated that St Thomas had preached in Brazil, no matter that Brazil as we understand today was unknown in his time. According to Clooney, one Ruiz de Montoya, writing in Peru in the mid-seventeenth century, thought that since God would not have overlooked the Americas for fifteen hundred years, and since among the twelve apostles St. Thomas was known for his mission to the “most abject people in the world, blacks and Indians,” it was only reasonable to conclude that St. Thomas had preached throughout the Americas:

“He began in Brazil – either reaching it by natural means on Roman ships, which some maintain were in communication with America from the coast of Africa, or else, as may be thought closer to the truth, being transported there by God miraculously. He passed to Paraguay and from there to the Peruvians.”

So here is the substance of the St. Thomas story. First, if he existed he was a twin brother of Jesus which is unacceptable because Jesus was the Only Son of God(born to a virgin). Next, he could not have preached Christianity in 52 AD because Christianity and the New Testament came into existence only in the fourth century, after the Council of Nicaea called by Roman Emperor Constantine in 325 AD. The first Christians came to India with the Syrian merchant Thomas in 345 AD escaping persecution in Persia. This was probably because Roman and Persian empires were great rivals. The Namboothiri Brahmins settled in Kerala only after the fourth AD, so could not have been converted by Apostle Thomas in 52 AD using the Bible from three centuries later.

Finally, the myth was created by Portuguese missionaries in the sixteenth century with the help of pirates. They destroyed also the Kapaleeswara Temple and a Jain temple building the church known as San Thome Cathedral in 1504. It acquired its present status and recognition as a cathedral (grand church) under British patronage in 1893. It was also the Portuguese who converted the Syrian Christians to the Catholic faith.

So, all these contradictions have to be reconciled before the myth of St Thomas can be taken seriously. – Folks Magazine, 7 November 2009

» Editor’s Note: Historians do not agree about the date for the coming of Namboothiri Brahmins to Kerala. Marxist historians make their arrival as late as the sixth century AD. However with the identification of the Namboothiri priestMezhathol Agnihothri (b. 342 AD), the date can be moved back to the fourth century. Namboothiri historians themselves do not give a date for the arrival of their community in Kerala from North India.

» Dr. N.S. Rajaram has referred to the second (1995) edition of The Myth of Saint Thomas and the Mylapore Shiva Temple for this article. The second edition is now out of print and not available on-line. However the third (2010) edition, which contains everything in the second edition, revised with corrected dates and many new references, is available on The Ishwar Sharan Archive. 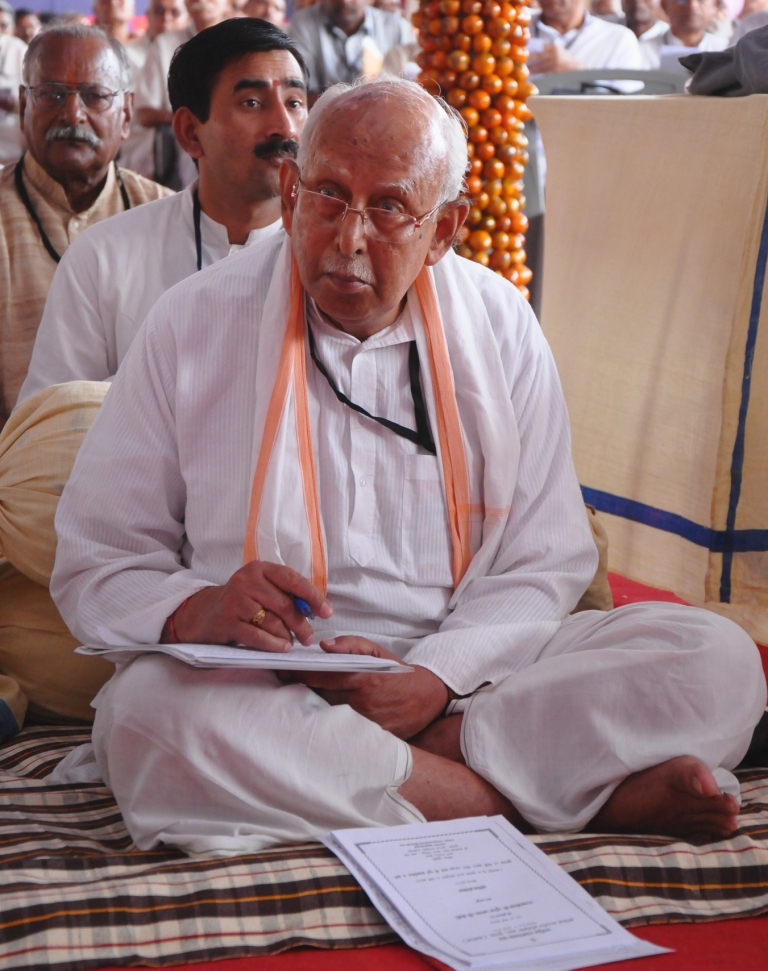