Not many persons I know have their Birth Anniversary on February 29, a date that comes only once in four years. But one prominent person I have known who belongs to this category is Shri Morarji Bhai Desai, former Prime Minister of India. This year, 2012, is a Leap Year. Morarji Bhai’s great grandson, Madhukeshwar Desai invited me for a function at Valsad, about one hundred kms. from Surat. It is here that Morarji Bhai’s ancestral home still stands, and where his family had some other properties also, which have been donated to social organizations.

India became independent in August, 1947. On the midnight of August 14/15, Pandit Nehru was sworn in as Prime Minister. The country suffered a military humiliation at China’s hands in 1962. Pandit Nehru could not bear the shock of China’s betrayal, and passed away in 1964.

Panditji was succeeded by Lal Bahadur Shastri. Again, for Shastriji, Tashkent proved costly. He could not survive the agreement Moscow presumably made him agree to at Tashkent.

In 1966, Indiraji took over the reins of office and won two Lok Sabha elections in succession – in 1967 and 1971. But the Emergency which her Government imposed on the country in 1975 proved suicidal for the Congress Party.

In 1977, thirty years after independence, for the first time in the history of independent India, a non-Congress Government headed by Shri Morarji Bhai Desai took over at New Delhi. This was Jana Sangh’s first opportunity to participate in the Central Government. Vajpayeeji, Brijlal Verma of Madhya Pradesh and myself were three from the Jana Sangh included in Morarji Bhai’s Cabinet.

At the very well attended Valsad meeting to honour Morarji Bhai on last February 29, I said that among the veterans of India’s Freedom Movement I have worked with, the two stalwarts I have found never willing to compromise with principles or ethics have been Jai Prakash Narain and Morarji Bhai. When in 1979, Morarji Bhai’s Government was facing a crisis because of the so called Dual Membership issue, in order to help avert the crisis, Vajpayeeji, Brijlal Verma and myself went to Morarji Bhai and handed over our resignation letters to him. Actually Janata Party President Chandrashekharji had met me, and had suggested that this could possibly prove a way out.  But as I have recorded in my autobiography :

“Morarjibhai did not even weigh the offer.  He rejected it outright saying, ‘Why should you resign? What wrong have you committed? Even if your offer is going to help my government, it would be immoral on my part to accept your resignations. I would rather quit myself, instead of making you quit”.

The Supreme Court’s recent judgement on the Delhi Police’s brutal crack-down on Baba Ramdev’s followers on Ramlila Ground came extensive excerpts of a Times of India article with the title “Ramlila Ground: Tryst with history”. Readers  would find these excerpts interesting.

Para 60 of the judgement reads:

The Ramlila Maidan provided an accurate barometer of the country’s political mood in 1960s and 1970s which can be gauged from an article dated 18th August, 2011 in the Times of India which stated as under:

“It was in Ramlila Ground that Jai Prakash Narain along with prominent Opposition leaders, addressed a mammoth rally on June 25, 1975 where he urged the armed forces to revolt against Indira Gandhi’s government. Quoting Ramdhari Singh Dinkar, JP thundered, “Singhasan Khali Karo, ki janta aati hai (Vacate the throne, for the people are here to claim it)”. That very midnight, Emergency was declared in the country. Less than two years later, the ground was the venue for another Opposition rally that many political commentators describe as epoch-changing. In February 1977, more than a month before Emergency was lifted, Opposition leaders led by Jagjivan Ram – his first public appearance after quitting the Congress – Morarji Desai, Atal Bihari Vajpayee, Charan Singh and Chandrashekar, held a joint rally.

That the Ramlila Ground provided an accurate barometer of the country’s political mood in the 1960s and 70s can be gauged from the fact that in 1972, just around three years before the JP rally, Indira Gandhi addressed a huge rally here following India’s victory over Pakistan in the Bangladesh war. In 1965, again at a time when the country was at war with Pakistan, it was from here that then Prime Minister Lal Bahadur Shastri gave the slogan ‘Jai Jawan Jai Kisan’.

According to Delhi historian, Ronald Vivian Smith, the Maidan was originally a pond which was filled up in the early 1930s so that the annual Ramlila could be shifted here from the flood plains behind Red Fort. It quickly became a popular site for political meetings, with Gandhiji, Nehru, Sardar Patel and other top nationalist leaders addrssing rallies here. According to one account, as Jinnah was holding a Muslim League rally here in 1945, he heard someone in the crowd address him as ‘Maulana’.  He reacted angrily saying he was a political leader and that honorific should never be used for him.

My colleague Arun Jaitley has last week released to the media a perceptive analysis of the Supreme Court verdict. He has complimented the court for upholding the citizen’s right to protest peacefully against any Government decision he disagrees with. But he still urges strongly that the latter part of the Court’s decision be reconsidered.

Jaitley says: “The judgement of the Supreme Court lays down a landmark law inasmuch as it upholds the right to protest as a fundamental right of speech and to assemble. However it shakes the foundation of the fundamental right by laying down a highly doubtful proposition that once the right to protest is denied, the protester must meekly accept the denial or run the risk of contributory negligence to the police oppression.

This part of the judgement requires to be extensively debated and possibly reconsidered.”

Morarji Bhai’s three-volume memoirs titled The Story of my Life mentions that when Morarji Bhai was in prison during  the Emergency, at some point, he received a message from Mrs. Indira Gandhi indicating several conditions which if accepted by the Opposition, she would think of lifting the Emergency. Morarji Bhai says :

“She (Indira Gandhi) laid down several conditions for lifting the Emergency. They included giving up the right of satyagraha. Whatever may be the view of others, I would prefer death to giving up these precious and inalienable human rights and duties. I would prefer life-long detention to becoming the Prime Minister in conditions such as the Emergency. I believe there will be hope for the nation’s and society’s future only so long as there are a few people still prepared to pay the extreme penalty to keep the torch of freedom burning.”

Mon Mar 5 , 2012
Haridwar March4: The Fourth International Conference of the Elders of Ancient Tradition is being held at Deva Sanskrithi Viswa Vidyalaya (DSVV) of Haridwar. The event is witnessing a vibrant congregation of 14 of the world’s oldest cultures and religions. The programme jointly organized by International Centre for Cultural Studies (ICCS) […] 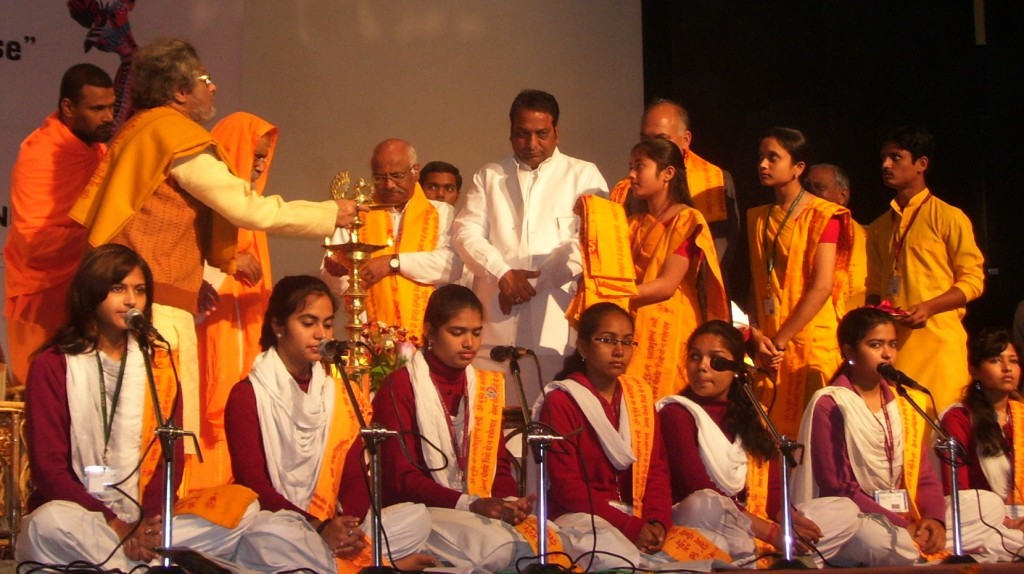