Suddenly we are seeing the news about Violence in Assam. Visual and Social media are feasting over it, especially for first time news followers. It looks like there is something wrong with Assam, but if you closely see the history of Assam, there is nothing new about these incidents. Poor Assamese have been going through this, almost every day, for decades. There were even attempts like making Assamese language as compulsory (in education) in 1961 or Assam agitation in 1980’s to send back Bangladeshi infiltrators.But there hasn’t been a single successful solution for this issue. The use of North Eastern border by Pakistani infiltrators is also no news to us. The moment we take the name Assam we should ideally be remembering the natural beauty of the state, the jungles, the landscapes, the Brahmaputra, wildlife, the tree plantations, the monuments and the temples.  Once Swami Vivekanandnanda had said “next only to Kashmir, Assam is the most beautiful place in India” unfortunately the situation in Assam is no different from Kashmir when it comes the socio-political instability.  The people are suffering same issue ofillegal infiltrators and vested interests in both the states, who want to make strong existence in India through the back door entry.

State government, being helpless duck, is not able control the situation.Even when we are reading this article, the state and central government has named this as “unprecedented ethnic violence” which actually started in Kokrajhar district of lower Assam.

On top of it, Chief Minister of Assam saying that he cannot assure if there wouldn’t be any fresh violence which can happen because the situation is beyond control.  If you closely watch the social stability in Assam for past few decades, nothing has happened overnight, the state and central governments have seen that this work is done by illegal infiltrators of Bangladeshi and Pakistan, who have been trying to capture the beautiful land of Assam through various ways.  Again, as per some of the reports the main cause for the violence is related to land encroachment which lead to killing of four youths who resisted inJoypur under Kokrajhar police station limits.

The government one-sided lenience about the issue, just for Vote Bank politics, is hitting hard for the local tribes.  The locals are suffering for decades together.  People who have entered in our nation illegally are owners of tea estates, business establishments, retail shops and almost every business.  It is making the local Assamese life more difficult in their-own motherland.Tribals who were once leading a happy and peaceful life are being harassed by these infiltrators.

It is a well-known fact that post-independence, there have N number of proofs about illegal Bangladeshi immigrants and governments-after-governments have been silent about the issue.  Sudden rise of registered voters have been a proof of people entering the borders in groups, because at some point the number was so high that even biologically it wasn’t possible to increase the population.  But even today there has been no attempt from the governments to differentiate between the locals and the immigrants.  They have been enjoying the all the facilities of central governments minority scheme.

It’s unfortunate to see that even after 65 years of independence Indian government is trying hard to control the situation in their own state.  Year after year, there have been temporary reasons given by governments killingall expectations of Assamese locals.  Today the number of these infiltrators has grown high, so much so that even local police cannot handle the situation they had to call the military and paramilitary forces to control the situation.  The government should really stop giving the smaller reasons like ethnic violence or land issues, the problem is much bigger and deeper then what we have been told and shown.

First government should stop calling this violence instant and probe into these well planned attacks which are repeated every year. The so called human right activists who make noise even if a rapist is beaten by the police and most of the famous visual media who have been making continues allegations about Gujarat(not Godhra) incident even after ten years, but today they have been silent about the entire issue. Isn’t it unfortunate to first allowing people to cross borders illegally and on top of it they troubling the local helpless tribals.

It was great feeling to see India’s outrage(on social networking sites & outside) over the shocking molestation of a girl on 10th July in the same Assam, by seeing every Indian’s interest about this case, within 15 days the state government with the help of central government nabbed all 15 culprits(that’s the result of people’s involvement and media’s report). But at the same time of the incident, there was planned violence which was started by some vested interests, which has lead to a shocking disturbance in Assam today. 40+ people lost their life(by the time I could finish this article the number has increased by 8 pople), thousands of people have been injured, nearly 2 Lac people have fled from there home’s in search of security, this includes women, kids and aged people. Don’t you think that government should have taken action about it before/along with solving the molestation case? Doesn’t this show the government double standards? Don’t you think that entire Indians/Media should be with our Assamese brothers and sisters in this time of crises? Let us spread the news and raise our voice.

The situation is not new and no different from Kashmir, Tripura, Bengal or Odisha, till the government seriously handles the issue at the root level, i.e. border issue, we will continue to have such planned attacks, will our government really put effort to save our own people??

Thu Jul 26 , 2012
New Delhi, July 26, 2012: Today, Dr Pravin Togadia has written a letter to the new President of India, Pranab Mukherjee. The letter dwells on the issue of current ethnic cleansing of original tribes, other Hindus & Non-Muslims including Christians in Assam perpetrated by Bangla Deshi infiltrators. Dr Togadia is very […] 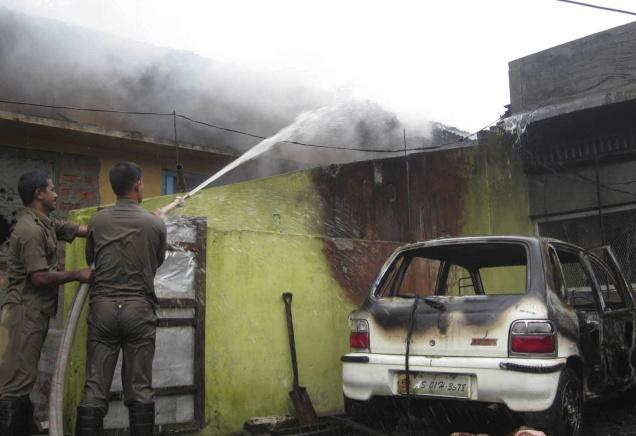