Bangalore July-27: In Assam, a sustained and systematic violence has been unleashed against native population and tribal communities. As of today Nearly 2,00,000 (2 lakhs) people have been displaced from their homes. An emergency response to the fast developing crisis is a need of the hour.Param Foundation has initiated crisis management by supporting all peace initiatives. We have initiated resource mobilization with the intent of providing relief to the victims of violence. Param foundation has partnered with seva organization in Assam that is working on relief activities. The foundation is receiving updates from local people and we are in the process of identifying requirements of the victims to reduce their suffering. Please go through a detailed article on the conflict in Assam below that gives you an idea of the situation. Please circulate this mail among your friends and colleagues and help Assam violence victims. Donors can transfer the money to the account details below.

Note: 80G receipts are available for the donors. Please send an email to info@paramfoundation.org with the address, email and telephone number of the donor. Receipts will be sent through the courier.

Background information about the Violence

Over 5 days in sustained & systematic violence against Original Tribes & other Hindus in Assam perpetrated by Bangla Deshi Infiltrators who have settled in Assam, around 1,70,000 people have lost their homes. Men, women and children have been killed, schools  and houses are burnt. Police confirm that the clashes began when unidentified men killed four youths belonging to Bodo tribe on Friday, 20th July 2012, night in Kokrajhar district.  Angered Bodos attacked Muslims in retaliation, suspecting them to be behind the killings. Since then, the violence has spread to more than 500 villages.

In recent years, Assamee tribes have vented strong anti-immigrant and anti-Muslim sentiment against Bangladeshi settlers. The tribes have clashed with Bengalis in deadly riots several times since the 1950s. Illegal Muslim migrants are sheltered actively by local Muslim populations and Muslims are accused of land-stealing. Muslim immigrants have inharmonious relationship with the locals. Simmering tensions is observed from a very long time between Assameese and the thousands of mostly Bengali Muslim settlers. As in the present case, aggressive attitude of immigrants is usually the cause of erupting conflicts between local people and illegal Muslim migrants.

Illegal immigration from Bangladesh has become “big problem” for India. It is difficult to assess how many illegal immigrants are currently residing in India. In recent decades, Muslims are constantly sneaking the porous border and almost 1.4 million illegal Bangladeshis have migrated to India over the past decade alone. It is a very well-known fact that Muslim infiltrators are entering North East and then many of them are travelling across the country to settle in different parts of the country. Local Muslim population provides shelter to the illegal immigrants in North East and elsewhere.

Recent violence has severed road and rail links connecting the narrow neck of the northeast to the main body of India. Innocent tribes Karbi Anglong, Khasi, Bodo, Dimasa, Jaintiya are worse affected, many losing their bread earners in attacks. Indian politics has failed to address the problem of Muslim infiltrators. Vote bank politics has taken precedence over the national interest. In 1971, during the civil war in neighboring East Pakistan, at least 10 million Hindus fled to India to avoid persecution (rape, murder, forced conversion, etc.) from Muslims.  Today, Hindus in India are being displaced within the country due to intolerant attitude of Muslim immigrants.

Commemorative programme in memory of Vishal at Bangalore

Fri Jul 27 , 2012
Bangalore – July 27: A commemorative programme in memory of Vishal, the slain ABVP leader has been organized in Bangalore by former co-workers. Vishal was a victim of ruthless campus politics. A human, a son, a student who wanted to soar high like Swami Vivekananda and Bhagat Singh, towards the […] 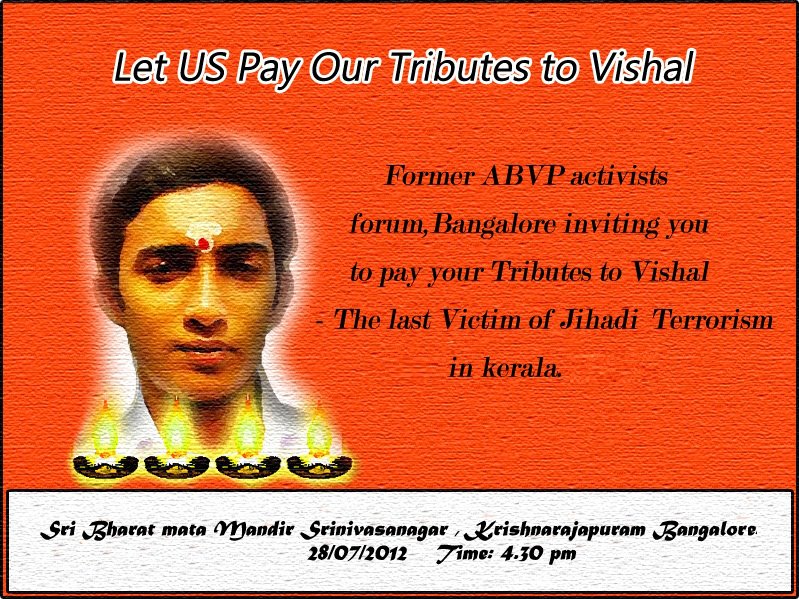