Chennai November 04, 2012: After distancing itself from the controversy over Nitin Gadkari’s business dealings, RSS on Sunday said it was upto BJP to decide on his second term as party president.

RSS General Secretary Suresh Bhaiyyaaji Joishi was speaking with reporters at Chennai, said “It is not an issue of RSS. political parties have their own system and their core group. We are not playing any role”,  at the conclusion of its three-day National Executive Council meeting at Kelambakkam on the the outskirts of the city.

The Summary of Bhaiyyaji Press Meet:

In the just concluded National Council Meet, review of work, discussions on current situation and plan for the next year were discussed. RSS is running different types of activities in 52,000 places in the country and out of which about 40,000 are daily meetings and 12,000 are weekly/monthly meetings. As always we continue our efforts on increasing the work, this year in comparison to last year the daily meetings have increased by 3000. Also in the daily meetings (of about 40,000) 75% of those who attend are below 45 age and out of that about 20,000 are below 25. We have concentrated on college students. In 11,000 colleges there are about 1000 plus activities for the students. Another area of focus is IT Professionals. As you all are aware there are IT hubs in places like Pune, Bangalore and Noida. In about 500 places IT professionals come together once in a week or even daily. As you would be aware Sangh Swayamsewaks involve in many service projects especially in Slums, Urban, tribal areas and remote villages. Over 1,50,000 service activities are being conducted by RSS.

In the last 2 to 3 years there has been focus on rural development. 250 villages in 15 states have been adopted for carrying out programmes to improve health, agriculture, self reliance and social harmony. We are sure in near future we will see good results.In the same way the program on Cow protection was taken up and a movement on cow protection  launched by saints called the Vishwa Mangal Gou Gram Yatra in which RSS volunteers also participated has yielded good results. Six hundred new Ghoshalas / research units have started.

Two resolutions were passed:
·         Serious security threat due to infiltration in Assam and other parts of country.
·         Need for comprehensive response to security challenge vis-à-vis  China.

Q 1: In your analysis you must have analysed strong and weak areas. Can you tell us which are the areas that need more work?
Answer: We need to improve in Jammu & Kashmir and also the North East. Since last year, Arunachal and Manipur have been made as new zones and work is improving. There are also some problems in Bengal. Our work is good in Kerala, Karnataka, Rajasthan, Madhya Pradesh, Chhattisgarh, Delhi and Gujarat.
Q 2: What is the RSS stand on businessmen entering politics? Can industrialists enter politics?
Answer:  Industrialists are also part of the nation and part of society. They can play different roles. Many industrialists come to RSS and work in educational field, social change programs, economic development and tribal welfare. So industrialists can take part in any welfare activities and also politics.
Q 3: In case of Gadkari there is a case of misuse and conflict of interest. Can such people enter politics? This opens allegation for misuse of power.
Answer:  We have already issued a statement on allegation against Gadkari. We have asked for impartial enquiry. All persons or organizations should be subjected to probe and it found guilty should be, punished as per law. But merely based on allegation, how can we say that he is wrong. A probe is needed and he has himself asked for a probe.
Q 4: Any discussion took place on Gadkari in the ABKM?
Answer: The discussions were focused on social issues, security issues etc.
Q 5: Does RSS endorse Gadkari for the second term?
Answer: This is not for RSS to decide. Political parties have their own system and they decide and we do not play a role in that.
Q 6: Girish Karnad has alleged that V.S . Naipaul is taking a right wing stand in his writings?  Do you think it is an unfair criticism on the Nobel laureate?
Answer: I do not have the details on what he said.
Q 7:Ram Jethmalani has written to RSS leadership that Modi should be the PM? What is your position?
Answer: It was not written to RSS Chief. It was written to BJP leadership.
Q 8: But does RSS have a view on that?
Answer:  Political parties take political decisions. We are not contesting election. It is their decision and it is not the time to say anything.
Q9: There is a suggestion that in Kerala the RSS should work with CPI(M).
Answer:  The said article has come in Kesari.  It is the Editors’ view and it is not necessarily the view of Sangh.
Q 10: What is RSS view on Kejriwal? Initially BJP joined with Kejriwal but now he is attacking BJP also. Is he taking the role of opposition?
Answer:  Kejriwal has raised issues. Gadkari has offered for a probe. No illegal act can be tolerated. Allegation alone is not enough but impartial probe is needed. If found guilty, should be punished by law as provided in the legal system.
Q 11:Have the allegations on Gadkari come as embarrassment?
Answer:  Not a problem connected to RSS.
Q 12:Will RSS conduct an independent enquiry?
Answer: We do not have any mechanism to conduct an inquiry.
Q 13: Will you form your own committee and conduct an inquiry?
Answer: It is not necessary.
Q 14: RSS often talks of national interest. Karnataka is not sharing water. What is the RSS message to BJP government?
Answer: Based on Supreme Court water has been released. Every government should follow Supreme Court order.
Q 15:What is your stand on Koodankulam?
Answer: We are for pro development. In the interest of country development should go on. We never oppose this type of projects. We expect it should be honest. They should not be pressurized by other countries. Church is involved in this protest. This project should be welcomed by all. We should take of environmental factors into account in such projects.
Q 16:Was there any discussion on PM candidate for BJP?
Answer: If political parties decide then we will think..
Q 17:You must be having a view on candidate?
Answer: This is too early !
Q 18: Will BJP come to power?
Answer: People will decide !
****************************************

Sun Nov 4 , 2012
Vadeyara Hobli, Udupi District November 04, 2012: It was a traditional and warm welcome for Bharat Parikrama Yatra at Vadeyara Hobli village near Kundapur of Udupi on its 88th day. RSS Pracharak Sitaram Kedilaya inspired the villagers by his thoughtful interactions during Graam Sampark. Launched on August 9 at Kanyakumari, Bharath […] 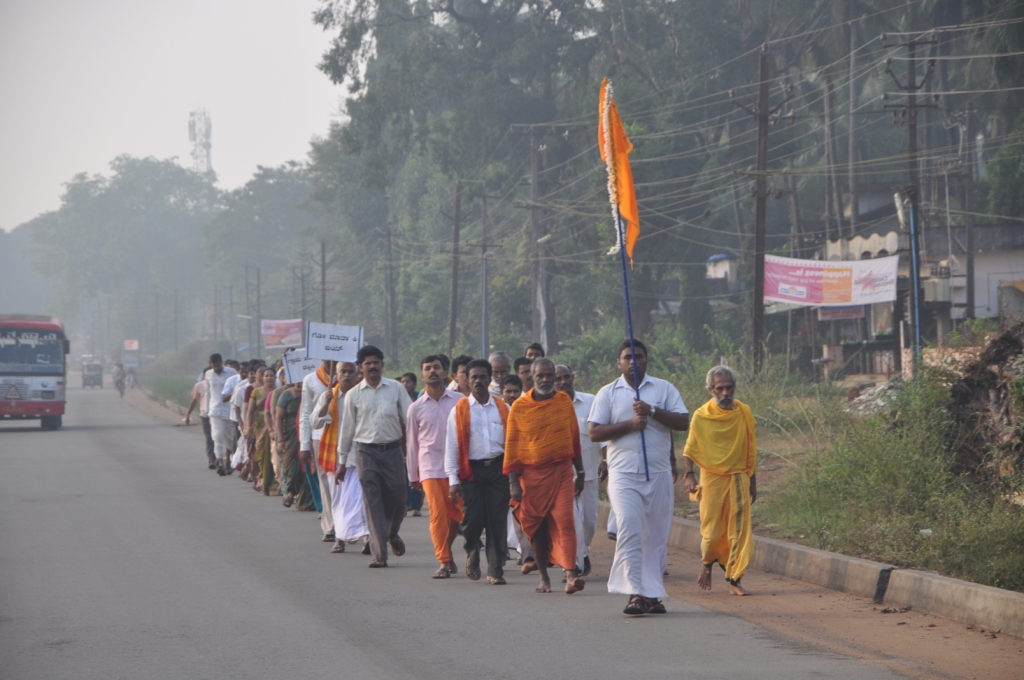