Defamatory comments on Judiciary and RSS

Mumbai: In a major breakthrough, Dapoli court in Maharashtra on January 10 issued summons to Marathi journalist and Hindu bashing former Loksatta editor Kumar Ketkar to be physically present before Dapoli court on April 16, 2012. The court ordered Dapoli Police Inspector to approach Kumar Ketkar to hand over summons for the second hearing on defamation suit filed by social activist NR Shigwan.

After thoroughly studying the evidences produced by lawyer of Shri Shigwan, regarding objectionable comments made by Ketkar against judiciary, the Court reached to the conclusion that there is substantial content in Ketkar’s articles which defames Indian Judiciary and the RSS.

Ketkar, in his defamatory article published in Marathi daily Loksatta on October 25, 2010 about the Rashtriya Swayamsevak Sangh and Indian Judiciary, gives an appall by saying that ‘RSS people with the ‘innocent’ and ‘harmless’ face have occupied key posts in media, bureaucracy, educational institutions, in police department and even in judiciary. Ketkar commented in the article that everyone has watched how strong is the ‘network’ of RSS from media to judiciary in the consequences of the Ayodhya verdict.

If Ketkar can’t prove his allegations against Indian Judiciary, he might face stringent punishment in near future. The only way out for Kumar Ketkar is to apologise in public for his defamatory comments and to produce written apology to court, otherwise he would have to face legal complexity. Petitioners have claimed that this is first court case Kumar Ketkar is facing in his life for his baseless series of articles targeting Hindu organisations. It would be interesting to see how Ketkar tackles this legal difficulty. (Newsbharati.com)

Sun Jan 15 , 2012
Mumbai: A crossing at Mulund (West) in Mumbai was named after Bharatiya Mazdoor Sangh founder the late Dattopant Thengadi recently. The crossing was named due to the efforts of BMC Corporator Shri Vishwanath. It is to be noted that a proposal to this effect was placed before the BMC in […] 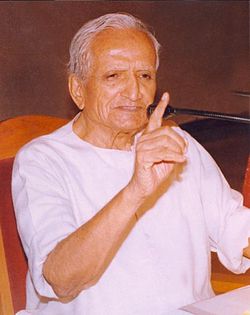