Illinois USA: Sri Vasudev (Baburao) Telang, one of the last swayamsevak who had seen Dr  Keshav Baliram Hedgewar, the Founder of RSS closely, passed away on Thursday, September 06, 2012 at 2:35 PM at the Wynscape Nursing Home in Wheaton, Illinois, USA.

Vasudev ji, then called Bsbu, was among the first swayamsevak who joined the firstSangh shakha in Mumbai at the Marwadi Vidyalaya in Girgaon in the early 30s along with Vinayakrao Walawalkar and other few.

Babu became Baburao when P.P. Guruji conferred the responsibility of Sanghachalak of Girgaon nagar on him.  He remained in that post until he left for USA to stay with his daughter Bansi Dhananjay Joshi in Wheaton, Illinois, in 1990.

Baburao ji was born on November 18, 1918. He earned his bachelors’ degree as a Textile Engineer from VJTI, Mumbai.  Then he started his career with Sizing Material, moved to Mettur Bearsell and retired in 1987 from Modern Mill as General Manager, Textile.

He did his OTCs in three consecutive years – 1938, 1939 and 1940.  He had the fortune of listening to Doctorji‘s baudhik during all those OTC’s.  In 1940 Doctor ji was ill in Pune and Baburao ji accompanied him in his last travel to Nagpur to attend the OTC.  He was sitting in the front row when Doctor ji delivered his famous last bauddhik in the third year OTC in 1940.

Baburao ji had close association with P.P. Sarsanghchalk Doctor ji, Guruji and Balasaheb ji.  He was trained under Doctor-ji, made sanghchalak by Guruji and attended Balasaheb ji in the Pune jail during the emergency.

He knew well most of the senior sangh adhikari from those days – Eknath ji Ranade to Sudarshan ji.  He was involved and supported the work of Nana Palkar Smruti Samiti since its inception.

During his stay in Wheaton, Baburao ji regularly attended sangh utsav and other special programs.  From his limited income, he used to offer Guru Dakshina samarpan without fail.  Many a times he would be the first one to offer contributions for new sangh programs and relief fund drives.

Swayamsevak and karyakarta in the Chicago area were fortunate to have a fatherly figure of Baburao-ji to draw inspiration from.

Baburao-ji is survived by his son Vivek – an attorney in Washington DC, daughter Nutan Jai, her husband Dr. Atuj and their daughter Mallika; and another daughter Bansi Joshi, her husband Dhananjay and their two daughters Reshma and Shilpa.

Sun Sep 9 , 2012
Bangalore: A Programme  to commeerate 23 Martyrdom of Mr.Tika Lal Taploo, first to fall the victum of Bullets of Terrorist in Srinagar is organised at Bangalore on September 14, 2012. Details are in the given below invitation: Please Click for enlarged View: email facebook twitter google+ WhatsApp 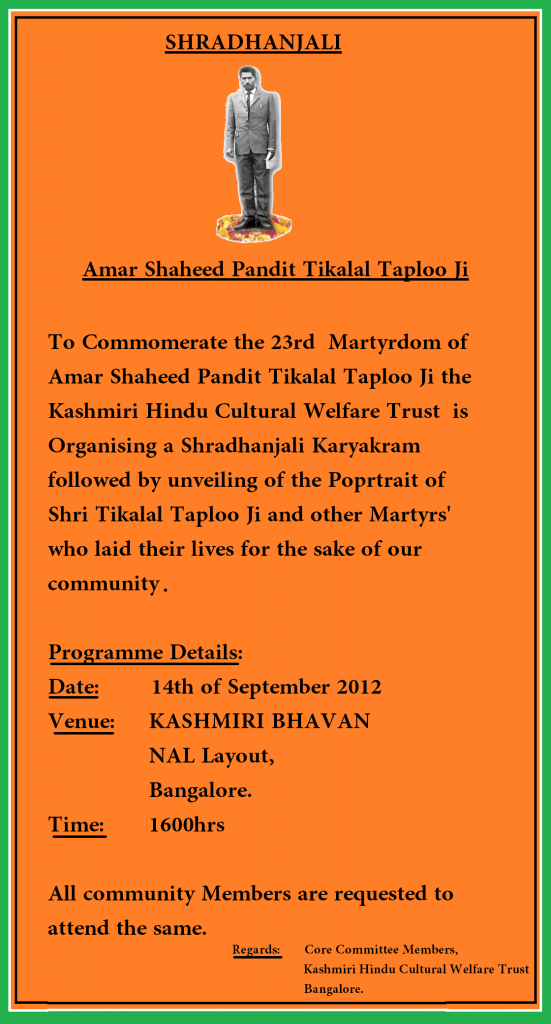