NEW DELHI — K.S. Sudarshan, who died early on Saturday, tried reaching out to Muslims and Christians during the nine years he headed the RSS, India’s most influential Hindu group.

The Rashtriya Swayamsevak Sangh appartachik was also a passionate votary of ‘Swadeshi’. His bluntness at times discomforted his RSS colleagues and those in the Bharatiya Janata Party (BJP) as well.

An engineer by training, the 81-year-old was a whole-timer of RSS for more than five decades. He headed RSS from 2000 to 2009, during which time Atal Bihari Vajpayee was prime minister (1998-2004). On more than one occasion, Sudarshan made it clear that he was not happy with the BJP-led Vajpayee coalition on core Hindutva issues.

He generated controversy with a suggestion in 2005 that Vajpayee and BJP star L.K. Advani should step down and let a younger generation take charge of the then ruling party.

As chief of BJP’s ideological fountainhead, Sudrashan made Sangh’s views known to Vajpayee from time to time.

Surdarshan’s comments at Bhopal in 2010 calling Congress president Sonia Gandhi a CIA agent angered the Congress. Both the BJP and RSS distanced themselves from his remarks. Well-read in Marxism, the RSS chief was a firm believer in Swadeshi, saying the philosophy of self-reliance was a way to make the society more equitable.

He stressed on self-sustaining rural economy and sustainable consumption. The Bharatiya Mazdoor Sangh (BMS) said Sudarshan strived a lot to bridge the gulf between the Indian Muslims and Christians with the Hindu society.

“He personally attended and interacted with many scholars with the same purpose.

He was the main speaker at the Sarva Pantha Samadar Manch of BMS, which works for inter-religious harmony. Sudarshan was born in Raipur into a Brahmin famil o June 18, 1931. He attended an RSS shakha at the young age of nine. He became a pracharak in 1954. In 1964, he was made the prant pracharak of Madhya Bharat (undivided Madhya Pradesh).

In 1990, he became the RSS joint general secretary.

Thu Sep 20 , 2012
Trichur, Kerala : ‘Sudarsanji is the person who was the model for all the leaders who realizes the value of Communal harmony. He made it possible in Kerala through his visit and talks with all religious leaders, especially with the Christian Community. The birth of mankind is not for to quarrel […] 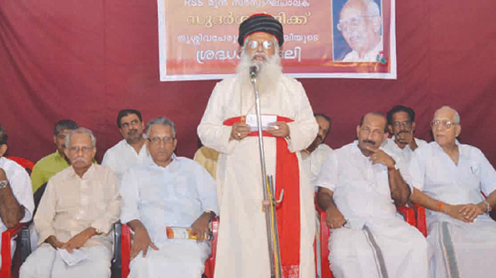