Bangalore July 3: A massive protest has been organised on July 9, Monday at Mangalore infront of district collectors office, rejecting the Interlocutors report on Jammu and Kashmir.

Voice your protest directly against the Government of Bharat appointed Interlocutors report that will fragment the nation.

Interlocutors report: A beginning of another divide?

Prima facie the report is not only objectionable but highly damaging to the unity, integrity and sovereignty of the nation. In a way the demands of the separatists have been given official sanction through this report.

In fact when it was revealed that two of the three interlocutors had participated in Anti-Bharat seminars upon the invitation accorded to them by ISI agent Dr.Ghulam Muhammad Fai, questions were raised on the intentions of the interlocutors group.

The report submitted by the group of Interlocutors on Jammu-Kashmir constituted by the central government does not portray the suggestionsthat emerged by talking to people from diverse sections of the society.In effect this report,which is in the name of unanimity among all the stake holders and citizens, is actually a favorable report prepared as per the demandsof the state and central governments. In fact the report addressesfistful of those separatists who were born out ofwanton and knee-jerk policies of the central government. The basis of such policies is the false beliefs that have been nurtured by them for the last 64 years.

The previous session of the parliament ended only some time ago. If the government was really keen on a debate on the recommendations of the interlocutors, it could have presented it in the parliament. But it seems that the government’s intent is to enforce the report through the back door. If it is indeed so, it should understand that it is playing with fire.

The interlocutors report is a bundle of contradictions and a part of the international conspiracy to separate Jammu-Kashmir from the rest of nation. Any kind of debate is not possible on this anti-national document.This report should be rejected in its totality and it is absolutely necessary to directly challenge this trend.

By reading the following recommendations made by the Interlocutors, one can realize what their intentions are and where doestheir loyalty lie.

Recommendations of Interlocutors and answers of nationalists

 Promptly ensure that movement of people, goods and services across the LOC and international border is free from any hindrances. For this constitute a combined committee of advisors or a united organization from both sides of the border which will plan for the development of the whole region.

To ensure that this be done, it is not only required to take the consent of the separatists groups in Bharat but also the consent of so-called Azad Jammu-Kashmir government and governments of Pakistan and China. Given the circumstances today this is nothing but mere speculation.

The above recommendation also means that Bharat abandon its position, of 6 decades, on Jammu-Kashmir that it is an internal matter and accept the sovereignty of so-called Azad Jammu-Kashmir government, Pakistan and China respectively and forsake its claim. The interlocutors have recognized the sovereignty of Pakistan over illegally occupied territories by mentioning it as Pakistan Administered Areas (PAK) throughout the report instead of mentioning as Pakistan Occupied Territory (POK).

The truth is that the Article 370 is a mere a procedural mechanism that does not guarantee any autonomy to the state. Moreover, the laws that are applicable to Jammu-Kashmir under this mechanism are alsoin forcein other parts of the country. If the same laws are for the welfare of 120 crore Bharatiyas, how can it be against the welfare of 1 crore 20 lakh people of Jammu-Kashmir. It is notable here that in 1952 Sheikh.

Protest at Madhugiri against JK report

Sun Jul 8 , 2012
Madhugiri, Karnataka: Massive protest was held at Madhugiri of Karnataka, against the Interlocutors protest  report on Jammu and Kashmir. T Nagaraj, Jilla Sanghchalk of RSS,  Chi.Su.Krishnamurthy, KSP Prisident and several other socio-political leaders were present during the protest. Later a delegation of ‘Jammu and Kashmir Ulisi Horata Samiti’ submitted memorendam to madhugiri […] 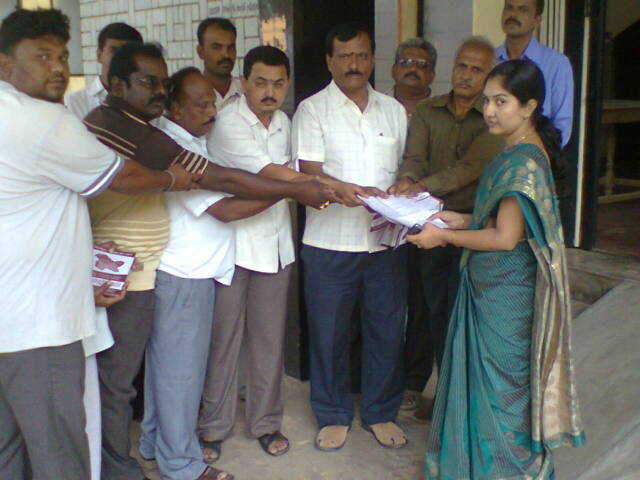