Mumbai: A crossing at Mulund (West) in Mumbai was named after Bharatiya Mazdoor Sangh founder the late Dattopant Thengadi recently. The crossing was named due to the efforts of BMC Corporator Shri Vishwanath.

It is to be noted that a proposal to this effect was placed before the BMC in 2005 and it could be materialised only in 2011. BJP leader Shri Ravindra Bhusari inaugurated the crossing at a function which was attended by thousands of people.

Sun Jan 15 , 2012
By Jyoti Lal Chowdhury in Silchar in ORGANISER Assam: “Netaji Subhas Chandra Bose and his ideals remain the perennial source of inspiration for the younger generations of the country in the hour of crisis,” said Dr Purabi Roy, Head of the Department of History, Calcutta University, and a distinguished researcher […] 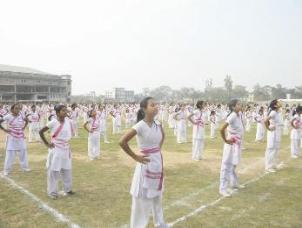