Organiser, Editorial August 26
What began as a trickle has become a mass exodus now. Thousands of Hindu families from Pakistan, who have entered India on a pilgrimage visa, do not want to go back to their homes. Faced with the rather daunting atmosphere of discrimination, humiliation, intimidation and persecution, they want to make India their home. Their plight is pathetic. They have to either give up their religion or forsake their homes. They have chosen the latter.

The population of Hindus was around 22 per cent in 1951 (it was 25 in 1947). By 1998 it had declined to 1.7. Today it is hovering around one percent. Pakistan first of all needs to explain this drastic fall in the number of Hindus.
The flight of Hindus from Pakistan is not a breaking news story as is being made out by the media, especially the TV channels. Organiser had covered the issue in detail earlier this year. Information on human right violations committed on minorities, particularly Hindus has been coming for decades now. Hindus are not allowed their right to idol worship, they are not allowed to cremate their dead, their festivals are celebrated muted for fear of reprisal. In day to day life, Hindu women are abducted, forced into marriage with Muslim men and converted. Several such cases have come to light recently.
Though the Pakistani spokespersons are trying to brush off the issue as a community or clan related, rather than religious, citing that Muslims too are being targeted, the truth is that Hindus are being attacked for their religion. The Pakistani government extracts a written affidavit from the Hindus travelling to India that they would not defame the country outside. Such is the level of repression within the system, not to speak of the rogue elements functioning with quasi official sanction.
The Indian government, under the minority-obsessed UPA, has been a deaf and dumb spectator of the plight of Hindus world over. It has not reacted to their pleas for citizenship and rehabilitation. The government that staked its relation with Sri Lanka to vote in the United Nations over the issue of Lankan Tamils has not taken an official stand on the Pakistani Hindus. The UPA’s double standard is puzzling to say the least. India is the only country in the world today which is home to Hindus. They turn towards us in times of distress. The Indians are morally bound to help any Hindu who seeks asylum here.
India allows millions of Bangladeshi Muslims to come and settle  illegally. See the consequence in Assam. They are also bestowed with such citizens’ privileges as voter I-card and ration card. Pakistani Hindus on the other hand, living for over decades in India are yet to be recognised as citizens of this country.
There is no comparison whatsoever between Pakistan and India. Yet it is appropriate to mention here the stark difference in the attitudes we have towards our respective minorities. While the Indian government identifies districts with significant Muslim population for special attention, the Pakistan government goads and supports those who persecute and drive Hindus out of that country. Muslims are the fastest growing community in India. They enjoy separate civil code, their places of worship are beyond the touch of government agencies, they are showered with freebies and incentives, so much so that the Prime Minister has declared that Muslims have the first right on our resources.
Coming back to the issue of Pakistani Hindus, for the people of Pakistan, Hindus may be an unwanted baggage. But we cannot allow them to face the same attitude here. India belongs to Hindus and Hindus world over belong to it. Anytime, they are welcome to come, live and grow roots here. They must not be seen as immigrants or refugees. That must be the firm attitude of the government of India, whichever party is heading it. It is not a political issue. Such an unequivocal stand of India would go a long way in strengthening the morale of Hindus world over. We have written in these columns about the harrowing life of Hindus in Bangladesh, Malaysia, Nepal and of course Kashmir. The government of India must declare a policy of welcome to all Hindus. And the Pakistani Hindus are victims of their own misplaced trust, when they chose to stay back there after the partition. They have suffered six decades for it. It must not be allowed any longer. End their misery and embrace them as our own. 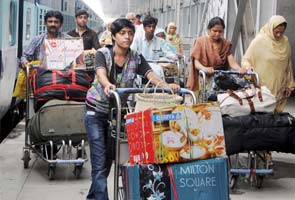