JAIPUR: Rajasthan chief minister Ashok Gehlotabruptly left a session of the Pravasi Bharatiya Diwas here on Monday after he found a gathering of NRIs cheering Gujarat chief minister Narendra Modi for his barbs at Congress leaders and UPA.

Modi was his usual self, hitting out at UPA for its “step-motherly treatment” of Gujarat, and the audience lapped it up, clapping at regular intervals, forcing an embarrassed Gehlot to rise abruptly and grab the microphone from Modi.

“Aapko jitna bolna hai bolo… main jaa raha hoon.” (You continue your rhetoric but I am leaving),” he said. However, the two did shake hands and exchanged smiles before Gehlot left the dais.

The response that Modi received from the delegates also left the moderator of the session, overseas Indian affairs minister Vayalar Ravi fuming. Ravi vented his anger at NRIs who were keen on showering praises and extending support to the Gujarat chief minister. He snapped at one of the NRIs, not allowing him to speak further, when the delegate commented that Rajasthan needed a Modi clone.

Earlier, making his introductory sppech, Ravi had targeted Modi, saying, “Everybody copies success models, even Modi does. And, then he claims he is the best.”

While Gehlot talked about support from the Centre, Modi took the opportunity to harp on “step-motherly” treatment. “The Rajasthan CM was taking about how much he had got from the Centre. I am not that fortunate. Gujarat gets nothing from the Centre, it’s a self-made state,” he said. “I don’t have the facts and figures like Gehlot had, but in 2001 my state had 11 universities. Today there are 41, many of them for specialized subjects like forensic science.” He then went on to list projects in Gujarat which the Centre ‘liked’ but failed to respond to.

Offering to host the 2015 Pravasi Bhartiya Divas, Modi sought Ravi’s consent. He said, “You (Ravi) had awarded PBD to Jaipur last year in New York in a minute but why not now?” But the latter remained quiet.

A few minutes earlier, Gehlot had heaped lavish praise on Ravi recalling how the latter had asked him to host PBD at a gettogether of people of Rajasthan origin in New York last year.

Wed Jan 11 , 2012
BHELUPUR (BUXAR): It was an emotional ‘pilgrimage’ for Trinidad and Tobago prime minister Kamla Persad-Bissessar to her ancestral village Bhelupur. She tried to fight back her tears but failed. As tears rolled down her cheeks, the ‘granddaughter of the soil’ entered her ancestral home and hugged women relatives in this remote and dusty village […] 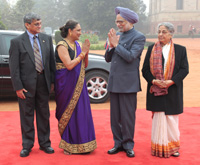