Ram Madhav on Twitter,says 'Many twitter blockings were without any Rhyme or Reason'

Fri Aug 24 , 2012
Bangalore August 24: RSS Ideologue Ram Madhav, who recently joined Twitter, expressing his personal opinions, has said “Many twitter blockings were without any rhyme or reason. So brazen that no law was cited either. Will be challenged in courts.” Ram Madhav expressed his suport for patriotic tweeples. Yesterday well known […] 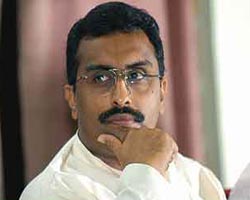