Mumbai April 19: Prominent leaders from Maharashtra and Madhya Pradesh (MP), including RSS chief Mohan Bhagwat, were targets of the gang of Students Islamic Movement of India (Simi) from MP, which was busted last month by the Anti-Terrorism Squad (ATS). During interrogation of the accused , it has emerged that the gang has  made Maharashtra its base for the past few months to earn money and then target leaders in both states. However, they were arrested even before they could start work.

A senior official of the ATS, requesting anonymity, told HT the gang had moved to the state after its operations were targeted in MP by the police. “They had set up bases in Aurangabad, Jalna and Buldhana and had rented houses in the area. They were also trying to recruit locals into their gang,” the official said.

Immediately after their arrest, ATS ascertained that the gang was setting up base in the state to commit robberies to raise money for terror.

The ATS has also found that two arrested, Abrar and Akhil, had links with top leaders of the Indian Mujahideen (IM). ATS also knows that the group they have arrested is part of a core group Mal-e-Ganimat within the MP Simi.

The gang members after the crackdown in MP in 2011, did not have much money and had come to the state to escape police attention and also to earn money by committing robberies, the official said. The gang has committed more than six bank robberies in MP and was also involved in looting 12 kg of gold in MP in early 2011. Members of the gang are also wanted for the murder of an ATS constable in MP.

Thu Apr 19 , 2012
NEW DELHI April 19: India on Thursday test-fired for the first time its most-ambitious strategic missile, the over 5,000-km range Agni-V, in a bid to join the super exclusive ICBM(intercontinental ballistic missile) club that counts just US, Russia,China, France and UK as its members. The solid-fuelled Agni-V, which will bring the whole […] 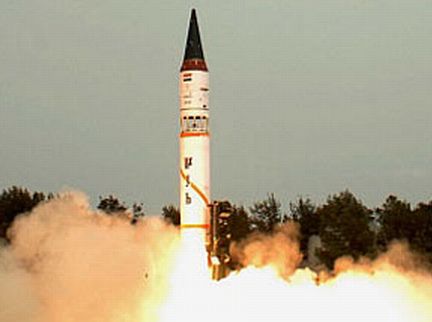