Aluva, Kerala: His Holiness Pujyasri Jayendra Saraswathi Sankaracharya Swamiji of Kanchikoti Peetham stressed the need for practicing devotion to the God and Nation. He affirmed that this is a must for the present changing times.

He was delivering this speech in a meeting at Keshavasmrithi, the RSS State Secretariat in Aluva during his two days Kerala visit. Swamiji said that the actions of RSS, founded by Dr. Hedgewar, led to the growth of awareness and culture in the community. He cautioned that the militant operations are being taking place in different parts of our country and this will pave way for destabilization of the nation. However he praised that RSS’s movement is a role model for the world. The Swamiji said that “I am happy to be born in India and what RSS doing are actions of Punya”. The Swamigal who reached earlier in the Keshavasmrithi was warmly received by the students of Veliyathunadu Thantravidyapeetham with Poorna Kumbha under the directions of PEB Menon – RSS Pranthsangh Chalak, Dr S Ayyappan Pillai – Dist. Sanghchalak and Dist. Karyavahaks P Madhu and Prasad Babu.

Tue Feb 14 , 2012
Gwalior, February 13: Criticising Salman Khursheed’s remarks about Batla House encounter, Dr Pravin Togadia, International Working President of VHP said, “Salman Khursheed claims that the encounter was fake, the govt was going to take action against it but kept quiet due to election and Sonia Gandhi’s eyes were full of tears […] 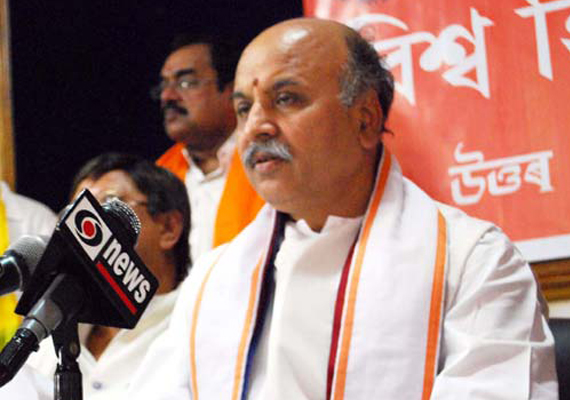