Bangalore June: 27 :‘ORISSA Government is all set to implement the Guarantee of Citizens’ Services Act. The Orissa cabinet has approved a draft bill in this regard and has been sent for approval of the Central Government’ said Sri. B.K.Patnaik, Chief Secretary of Orrissa, here today. He was on a visit to Bangalore    to study the process of implementation of Guarantee of Citizen Services Act.

He was talking in ameetiung arranged in this regard under the chairmanship of Sri.S.V.Ranganath, Chief Secretary, Govt. of Karnataka. He interacted with the heads of implementing departments. Dr.Shalini Rajaneesh, Principal secretary, DPAR and Mission Director Sakala, Sri.Maneesh Moudgil, Additional Mission Director Sakala, Dr.B.R.Mamatha, Joint Director and Nodal officer for  Publicity Sakala, and other senior officers of different implementing Departments of Home, Revenue, E-Governence, Transport and others  were present in this interactive session.

Dr.Shalini Rajneesh, while addressing the meeting, said that, SAKALA the process of implementation of sakala, and said that Citizen services Act is as good and as effective as RTI Act.

Mr. Maneesh Moudgil explained the practical problems in implementing SAKALA  and also assured that the Mission had taken it as a challenge and had deviced mechanism to overcome hurdles.

Sri.S.V.Ranganath who chaired the meeting said that Government is  striving hard to simplify the procedural process and its also thinking of bringing 300 more services under the purview of Sakala. He opined that the acceptance of SAKALA by the political leadership of the State barring any political affiliations is the main reason for the phenomenal success of Sakala.

Dr.B.R.Mamatha,  the nodal officer, publicity, SAKALA, said  an Action Plan for Publicity of SAKALA was a consciously Planned Strategy and was aimed at creating awareness about SAKALA to every nook and corner of the State.This has led to its success. She said that involving both conventional and non conventional media for the publicity and using innovative methods like social networking sites were the reason for this effective publicity.

Sakala; What the system essentially means for the common man is that the bureaucracy will have to deliver within a set deadline a list of services notified in the Karnataka Gazette.

In all, 151 services of 11 major government departments have been brought within the ambit of Sakala, and they are Commercial Taxes, Education, Food and Civil Supplies, Health and Family Welfare, Home, Labour, Revenue , Transport and Rural Development and Panchayat Raj.

Bangalore, June 27: The SAKALA Programme ( Karnataka Guarantee Of Services to Citizen Act) has also managed to generate interest among socially conscious school students. Aditi Mallya school located in Yelahanka have come forward to assist the Department of Information in the Publicity Campaign launched by the Department for a period of one year.

The students of class 12 of Aditi Mallya school today attended a workshop on SAKALA organized by the Department Of Information for them.

Dr.Mamatha.B.R., Joint Director, Department of Information and Nodal Officer, Publicity, SAKALA, addressed the students about the Act, its benefits and the communication, Action Plan adapted by the Department.

The students will be assisting the Department in door to door campaign, Social networking campaign and will also prepare creative software for audio-visual Media, Street plays and such other activities.

Thu Jun 28 , 2012
Puskar, Rajasthan June 27: “Muslims in India have not come from outside but belong to this country and is an inseparable part of the national life of this country like their Hindus”, observed K S Sudarshan, former Sarsanghchalak of Rashtriya Swayamsevak Sangh (RSS) here on Tuesday. Sudarshan was delivering inaugural […] 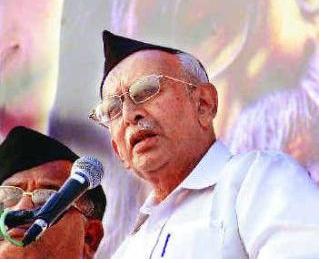