Mammoth gathering of swayamsevaks in Kanyakumari: RSS Sarsanghachalak Shri Mohan Bhagwat addressed a huge gathering of swayamsevaks at Nagerkoil in Kanyakumari district of Tamil Nadu on February 12. The event was organised as part of the 150th birth anniversary of Swami Vivekananda. A total of 15,906 swayamsevaks in complete uniform participated in the function. More than 51,699 people from the general public including a large number of women also witnessed the event. Former judge of Chennai High Court Shri AR Ramalingam presided over the function. Prior to the function a welcome committee under the chairmanship of Shri VVD Raveendran, leading industrialist, was formed and the Committee successfully organised the event. The secretary of the Reception Committee Dr Sreenivasa Kannan who is Kanyakumari Vibhag Sanghachalak, delivered the welcome speech. Addressing the swayamsevaks, Shri Bhagwat said mere celebration of Swami Vivekananda’s birth anniversary is not sufficient, real remembrance of him would be through implementing the values he propagated. “Today’s event should encourage us to study and think more on the lines of Swami Vivekananda,” he said.

“Swami Vivekananda lived his spiritual life entirely for nationalism and the countrymen. He had won America by his very first word. He had observed in great detail the material abundance and the wealthy life of America. He was accommodated by a rich man in his palatial house with all types of modern amenities of that time, and looked after cordially by him. But in the midnight that rich man was awakened by a cry. When he woke up and began to find out the place from where the cry came, he had seen Swamiji sitting on the floor in his room on the ground and weeping bitterly. The rich man asked Swamiji whether there was any slackness in his hospitality or is there in any way Swamiji was discourteously treated. Swamiji replied tearfully about the wealthy way of life of Americans and the piteous and pathetic life of millions of people of his motherland and the restlessness it created in his mind. The host was wonder struck and began to rever the Swamiji more for his patriotism and inner feeling for his fellow countrymen. Such was Swami Vivekananda! He lived not for his welfare but only for the welfare of his country,” Shri Bhagwat said. He said Swami Vivekananda shown the way for the development of the country—Bharat should exist as Bharat only and make progress only in Bharatiya way. It should not change itself as a carbon copy of any other country. He always remembered the lion cub-sheep story.

Keeping the story of a cub which grew up with sheep and forgot the character of a lion in his mind, Swami Vivekananda found out the reasons for the sorry state of affairs of the people. “Our rulers, even though raised amidst us, had forgotten themselves like the lion in the sheepherd. We were unable to progress due to our self forgetfulness, even though it was our rule. Problems are here every where starting with border problem. We are the solution to all our crises. We are the descendents of those who lived and shed their sweat and blood for this nation,” Shri Bhagwat added.

He further said Swami Vivekananda performed “Bharat Parikrama” (spiritual circular pilgrimage by foot around Bharat) and understood clearly the problems of Bharat. He realised the need for an organisation to mould men who will think all the Hindus with good qualities in the entire world as their kith and kin. Doctor Hedgewar had his education in Kolkata and had participated in various activities for the freedom struggle. He had been imprisoned twice, once before starting Sangh and once after that for participating in the Independence struggle. He started shops to sell Swadeshi products. He had run a paper to inspire nationalism. He felt the need for well organised, reliable, strong, young men who can withstand anything. He held discussions about this subject with great personalities like Gandhiji, Netaji, Veer Savarkar and Malaviyaji. This is the vision envisaged by Swami Vivekananda. So he started the Sangh in 1925 to bring Swami Vivekananda’s dream of man-making into reality. He had seen with his own eyes the growth of Sangh in the right path in 1940,” Shri Bhagwat said.

He said the identity of this nation is Hindutva. Our forefathers without staining the earth with the blood of anybody from Mexico to Siberia, without changing anything, gave the Hinduness, which makes everybody feel the divinity present in every living being with qualities such as wisdom, valour, mathematics, etc, Bharath has to raise herself and stand on her own legs. People’s power had to be created for this. No change will come by merely changing the leaders, laws, etc. People adhering to our dharma, with mind to help others crossing over circumstances with good confidence, had to be created in village after village. Sangh is working only for this, the Sarsanghachalak said.

Shakha is the ground to impart intellectual, mental, physical training. It creates the feeling that our nation is one and we are one. Saffron flag inculcates within us the philosophy of Hindu dharma. Swayamsevaks, when major calamities occur, go there before anybody reaches there and help the people only because of this. Thousands of swayamsevaks are rendering services today with their own resources without expecting anybody. Swami Vivekananda had dreamt only this. Sangh is working only to bring that dream into reality. He called upon the swayamsevaks to generate Hindu unity to safeguard the Hindu society, Hindu culture and quality. “Bharat will raise only if Hindu Dharma exists. Universe will live only if Bharat rises up. Changing the thousand years of weakness is in our hands only. Shakha had to be held in every village to impart training to Hindus to imbibe Hinduness. Integrated social transformation had to be brought. That had to be brought out by our life. We visualise here the power of most disciplined swayamsevaks. We have to convey the message of Swami Vivekananda to every place. We should take over the responsibility of creating the oneness of the universe in this 150th birth anniversary of Swami Vivekananda. We should not remain as mere mute spectators. We should convey the message of Swami Vivekananda to everybody, and strive to create a society, which will dedicate body, mind and property as a whole for national life. It is neither the work of leaders nor God. It is the work of people’s power. Shri Bhagwat said the mothers too must get trained in Rashtra Sevika Samiti just like the Sangh work of generating people’s power for national interest. We should become transformers of our belonging to dedicate them to the nation. We should become karyakarta to create a society that will make the nation to raise and stand. We can see with our own eyes Swami Vivekananda’s dreams of our BharatMata adorning the universal throne and guide the universe. We shout strive for raising the nation and make her stand on her leg.

Presidential address was given by Sri A R Ramalingam, Judge of Chennai High Court (Retd). He remarked, “I have heard of Sangh. Today I am seeing in front of me. I can feel the qualities of Discipline, Patriotism, Service, Sacrifice in you. These qualities are needed today for the nation. This should grow and this will have a change in the society and we should all participate in developing these qualities”.

A book “Thirai” translated from Kannada novel “Aavarana” was released by Sri Mohan Bhagawat and received by the President of the function Sri A R Ramalingam. Two Audio CDs of patriotic song was also released by Sri Mohan Ji Bhagawat and received by Bala Ganesh, Industrialist. The book is written in Kannada by Sri S L Byrappa- a famous Kannada Writer. The book was translated by Sri Jaya Venkatraman.

Thu Feb 16 , 2012
Reacting to the allegations on Saffronisation of textbooks in Karnataka, Prof GS Mudambadithaya, coordinator, NCF Curriculum revision and textbook preparation, said: “Those who are protesting have not seen the final version of the draft. If they had, all these problems could have been avoided. I am not a BJP man. […] 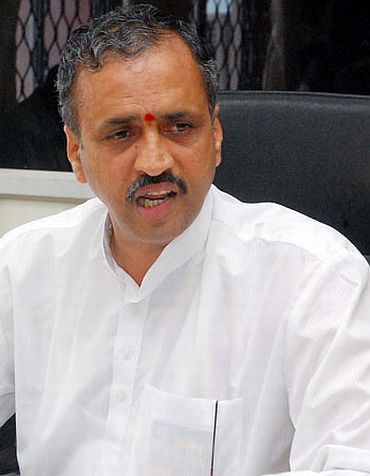