NewDelhi: Veteran Sangh Pracharak Jyoti Swarup passed away at a private hospital in New Delhi on May 28. He was 91. He was unwell for some time due to age related disorders. He was cremated in New Delhi the same day. The last rites were jointly performed by his youngest brother Shri Arvind Bansal and nephew Shri Ashish Bansal. In his tribute, Acharya Giriraj Kishor described Jyotiji as his param mitra who always thought for the society and the nation. VHP general secretary Shri Champat Rai said it is rare to dedicate so many decades of life to a single cause.
Dr Bajranglal Gupt said: “The first Pracharak whom I met after becoming a full time activist in Rajasthan was Jyotiji. The relations that developed in 1955 remained alive till today. He was among the people who lived on very limited resources. He had the quality of developing good swayamsevaks. His life is an inspiration for all of us.”
Shri Kidar-nath Sahni described Jyotiji as ‘an inspiring, hard working and dedicated life’. “He was an ideal of dedicated life. His death is a loss not only for the organisation but also for the society. Such people truly become the foundation stone,” he said.
Born in a well-to-do family of Nangla Hareru village under Mawana tehsil of Meerut on January 22, 1922, Jyotiji got his primary education at a Christian Missionary school in Bairakpur Cant in Bengal, where his father was then working in engineering wing of the Army. He came in contact with RSS while studying at Nanakchand College of Meerut and he joined the Sangh shakha while staying in Tyagi hostel of the College. “What I got in the bauddhik of the shakha on first day, lights my path even today,” Jyotiji used to points out. Undoubtedly, he lived the life like a true visionary who mould many swayamsevaks.
He became a Sangh Pracharak after getting third year OTC in 1943 and also completing graduation. Basically, he had thought of working as a Sangh Pracharak only for one year. Initially, he was given the charge of Muzaffarnagar. After completion of one year as Pracharak he asked Basantrao Oakji whether he can go back. Oakji asked, “If everybody like you goes back how the Sangh work will continue?” After that Jyotiji never thought of going back home. After Partition, he was deputed in Rajasthan where he was made Vibhag Pracharak of Jaipur. After that he was sent to Jammu & Kashmir. He came to Delhi in 1965. Then he was given the charge of a sewa project in Kangra (Himachal Pradesh) in 1971. He was again made a Zila Pracharak in 1972. When asked why he was demoted from a Vibhag Pracharak to a Zila Pracharak Jyotiji said, “I never thought why I was given the responsibility of a Vibhag Pracharak in 1952 and then the responsibility of a Zila Pracharak in 1972. It is my endeavour right from the day I became a Pracharak to finish the task that I am given by the Sangh.”
Jyotiji was sent to Punjab in 1975, but he was again called to Delhi in 1979. While staying in Delhi he looked after the correspondence work of Prof Rajju Bhaiya and Shri Bhaurao Deoras. Later, he became Karyalaya Pramukh. Still, he was staying in Delhi Karyalaya dedicating his time and energy for maintaining the Sangh Archive and the library. The two things that he followed throughout his life were attending daily shakha and performing evening prayer. His memory was very sharp. If he found any factual mistake in Organiser or in any other journal published by the RSS associated organisations, he immediately pointed out.
There are many people who have seen Jyotiji from very close. Dr Yogendra, who has been looking after the medical needs at Keshav Kunj since 1978, is one of them. He says, “Jyotiji worked about 18 hours daily. If he found any place dirty, he did not hesitate to clean that. He could be seen cleaning the Sangh Sthan of Keshav Kunj with broom. Being a Vyavastha Pramukh he was very particular and transparent in financial matters. While working in Rajasthan, he practically realised the scarcity of water. That is why many times he even avoided bath and used to do sponge only. While bathing too, he used minimum water. His other needs were also minimum. Sometimes he got angered for a moment but the next moment he was very soft, loving and caring. His memory was very sharp. He could recall the important incidents of national life with their dates and time. He was truly a karmayogi.”
“His knowledge about the Sangh work and also the society was unparallel. He was expert in building workers and bringing new people to the Sangh fold,” said Shri Mahesh Pathak of Bharatiya Rail Mazdoor Sangh. Shri Pathak was instrumental in arranging a special train to Nagpur for the Sangh Pracharaks in 1989. Over 4000 Pracharaks  from different parts of the country had travelled to Nagpur by that train. 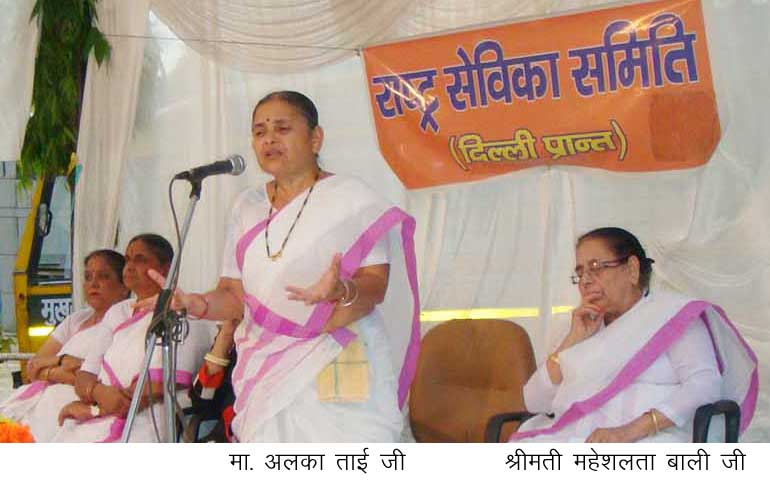